The largest city in the northern part of Japan's main island, Sendai is a pleasant and airy city with a modern face and a good deal of history. 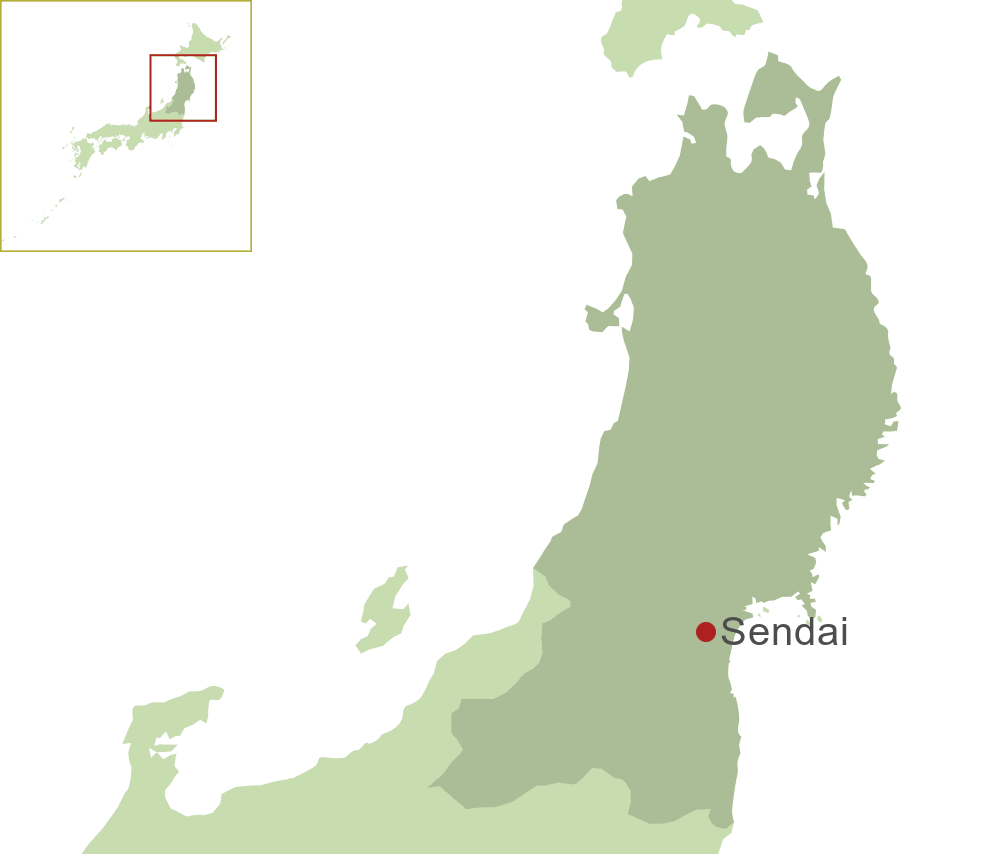 “The largest city in the Tohoku Region, Sendai has a cosmopolitan atmosphere and is full of things to see and do. Fantastic shopping and a very lively entertainment district couple with interesting sights make the city a great place to spend a couple of nights.”

With a population of over one million, Sendai is the prefectural capital of Miyagi Prefecture and the cultural and industrial centre of the Tohoku region. Called the "City of Trees," the city boasts wide, tree-lined avenues and numerous parks, a dubious legacy of the heavy bombardment suffered during WWII.

Unlike most Japanese cities, Sendai is laid out in a grid pattern. Although many of its historical sites were obliterated during the Pacific War, it is diverse enough to be entertaining. Many of its attractions (such as the ruins of Aoba Castle) relate to its history as the seat of Date Masamune, one of Japan's most powerful feudal warlords.

Thanks to these attractions, Sendai makes an ideal way-station for travellers moving north or south. Sendai is also a convenient base for visiting the Matsushima bay area (rated as one of Japan's top three sights) and for taking a trip to the temple town of Hiraizumi.

One of the modern city attractions is the Sendai Mediatheque complex, which houses arts and cultural exhibits in a high-tech environment. The main shopping and entertainment area is around Ichibancho Avenue, where there are a reasonable selection of shops, bars, cafes, restaurants and clubs. The Nagamachi district, close to Sendai station, has more shops, including the major Japanese department stores.

The Tanabata Matsuri is Sendai's big annual event, held from 6 to 8 August this festival celebrates an ancient Chinese fairytale about two lovers who could only meet when the stars Vega and Altair met in the Milky Way. The dates are somewhat out of sync these days, but the city celebrates in style with street decorations and parades and fireworks. It is traditional, and nowadays very fashionable, to don a colourful yukata and take part in the street dancing.

Sendai is connected to Tokyo by the Tohoku Shinkansen (bullet train) in just under two hours. This fast, ultra-modern line will eventually lead all the way to Sapporo in the north. For the meantime however you can use it to make a day trip to Hiraizumi where you will find the famous Golden Temple of the north.

Impact of the Tohoku Earthquake

Sendai was by far the closest city to the epicentre of the 2011 Tohoku earthquake, and whilst the city centre suffered little physical damage, its outskirts and nearby coastal areas were devastated by the ensuing tsunami. Nevertheless, infrastructure in the Tohoku region as a whole was quick to recover and most major tourist sites were relatively unaffected by the quake, meaning that today you will find almost no visible signs of the disaster's impact on the area.

Sendai is situated around 120km to the north of the Fukushima power plant and well outside the boundaries of the exclusion zone. Whilst the problem of ongoing nuclear radiation from the disaster is difficult to quantify, readings strongly suggest that radiation levels in Sendai and the surrounding area are not elevated enough to pose a risk to the short-term traveller.

Tourists were welcomed back to the Tohoku region a matter of months after the disaster, and the continuation of tourism in the area is of great importance to the recovery and long-term survival of small businesses and the local economy as a whole. Some visitors to the area also choose to engage themselves in the recovery effort, and in the past we have been able to arrange volunteering for some of our customers to the Tohoku area.

It's Just Not Mud was set up by a young British man, Jamie El Banna, who worked tirelessly in the aftermath of the disaster to coordinate Japanese and Western volunteers in the big clean up; removing mud and debris from homes, schools and local businesses. Jamie and his team also helped out in temporary housing shelters, supporting the local community through the organisation of educational events and distribution of free goods. In 2012 we decided to lend our support to this organisation, which works in the tsunami-devastated town of Ishinomaki.

Though today you will find no temporary shelters or mud left behind, places like Ishinomaki have a long way to go before they have truly recovered from the devastating effects of the tsunami, and your custom is greatly appreciated in the hotels, guest houses and restaurants of these northern regions.

Sendai offers a wealth of exciting experiences that will help you get beneath the surface of Japan's fascinating culture. See below for a few of our favourites

The Climate Guide for Sendai, Japan is perfect for planning your holiday. Monthly weather averages give the best indication of what the weather is usually like for every month of the year including figures for temperature, rainfall and sunshine.