Haguro-san is the lowest of the three peaks of Dewa-sanzan. Located 414 metres above sea level, a climb to the top of this peak is rewarded with fantastic views of the Japan Sea and rice fields of the Shonai Plain. 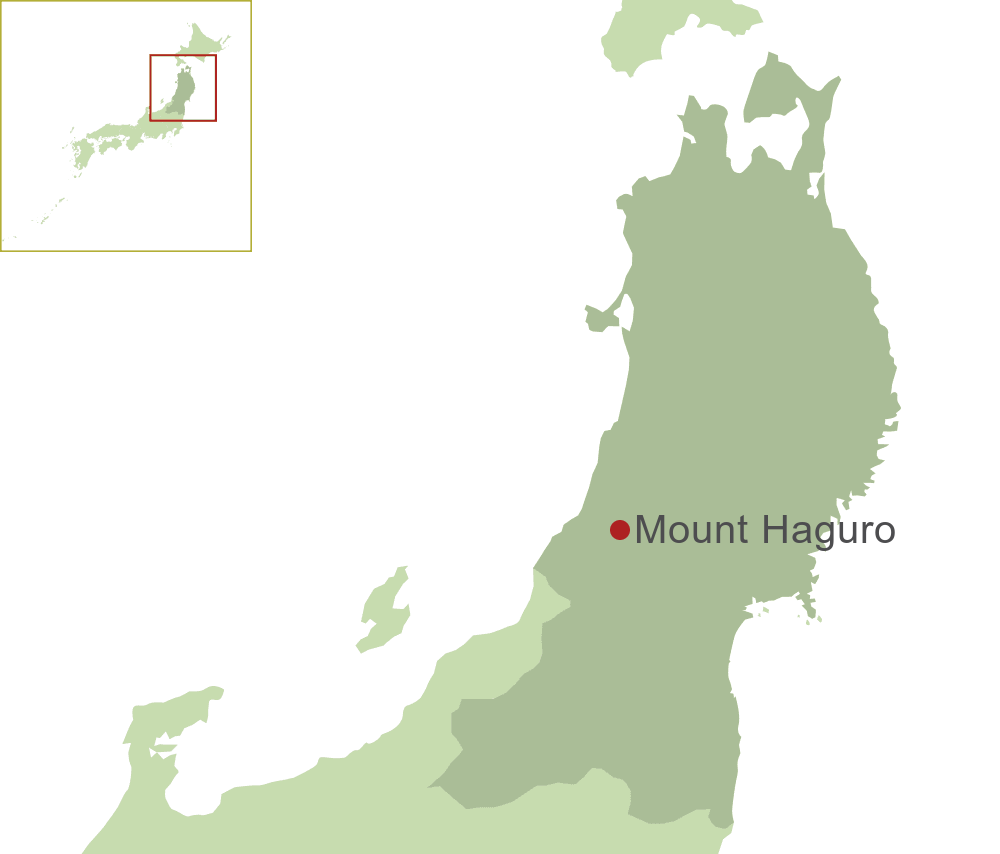 The name "Haguro" means "black wing" and the mountain got its name from a legend which recalls the story of an Imperial prince who ran away after the death of his Father. In a vision, he was guided to the peak of Haguro-san by a three-legged crow. He lived atop the mountain until aged 90 and was the first of the mountain's famed 'Yamabushi', mountain priests. Nowadays, Haguro-san is the site of religious pilgrimage although some still choose the life of austerity. This once consisted of living in a cave, eating a diet of wild nuts and garlic and meditating under icy cold waterfalls. Yamabushi are distinctive with their checked jackets, white knickerbockers and small Jimmy Cooper style hats. Occasionally a haunting cry rings out around the hills. This is the conch shell horn used by the Yamabushi to call the spirits of the mountain.

Haguro-san is a place charged with spirits and religious mysticism as well as being a challenging climb. The path is formed by three staircases which reach to the large red torii gate marking the entrance to a shrine, Gosaiden. This is the home of Dewa-sanzan's three main deities who stand guard under an impressive thatched roof. The view of Gosaiden is intensified by Kagami lake where it is purported that the spirits of the three deities can be seen reflected. The name ?Kagami? means mirror and stems from the days when only men were allowed to make the climb to Gosaiden. So they could make an offering, the women sent mirrors, which were then thrown into the lake as a votive to the spirits of the temple.

Whatever your religious persuasion, there is a strangely magical atmosphere at Haguro, which should leave you feeling moved and spiritually cleansed.

The following are our favourites from among the western-style hotels and Japanese-style inns of Mount Haguro.

Mount Haguro offers a wealth of exciting experiences that will help you get beneath the surface of Japan's fascinating culture. See below for a few of our favourites

The Climate Guide for Mount Haguro, Japan is perfect for planning your holiday. Monthly weather averages give the best indication of what the weather is usually like for every month of the year including figures for temperature, rainfall and sunshine.