The traditional theatre arts of kabuki, noh and bunraku puppetry are still performed in Japan today.

The second of Japan's traditional styles of theatre, Noh has been performed since the fourteenth century. Traditionally, a Noh performance lasts all day - consisting of several Noh plays interspersed with shorter, comic pieces - but today you'll find that performances are much shorter! Actors in Noh usually wear masks, and as with Kabuki all the parts are played by men.

Bunraku is a form of traditional puppet theatre, founded in Osaka in 1684. Bunraku performances feature wooden puppets and involve puppeteers, chanters, and shamisen musicians. The construction of the puppets and their costumes requires great skill, and various performers and puppet-makers have been designated Living National Treasures in Japan today.

The traditional theatre arts of kabuki, noh and bunraku puppetry are still performed in Japan today. 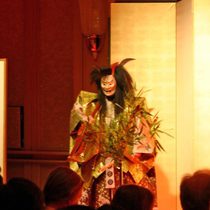 Noh
A subtle blend of music, dance and drama dating back to the 14th century
Read more
Print

A night at the theatre

You're in Tokyo with InsideJapan Tours - why not take in the theatre? If you are shopping or just window-shopping in Ginza in the heart of Tokyo, you are only a few minutes' walk from the Shimbashi Embujo.

Here you can arrive around 4pm, drink in the atmosphere of excited crowds of theatre-goers milling around the many stalls selling theatrical souvenirs, then sit in a comfortable seat watching the amazing performance on stage and listening to an English translation through an earphone. The long interval gives you time for a full meal at one of the theatre restaurants.

Most months of the year the theatre you will watch will be Kabuki, one of Japan's three main traditional theatre genres. Kabuki began in the seventeenth century and quickly developed a highly stylised type of acting that has been popular ever since.

All parts in Kabuki are played by men and some of its greatest actors specialise in playing female characters. Kabuki stars are part of Japan's celebrity culture and you will often see their faces on advertising billboards or in TV commercials.

Apart from Kabuki, the puppet theatre (Bunraku), with each puppet being manipulated by three puppeteers, also dates from the seventeenth century, and Noh, a more stately form of danced theatre in which many main actors wear wooden masks, can  trace its history back to the fourteenth century.

Bunraku is most regularly played in Osaka at the National Bunraku Theatre and earphone guides are also available there. Noh can be watched at the National Noh Theatre in Tokyo, and each seat has a personal subtitling system.

Japan has preserved its traditional theatre forms, but it has a vibrant modern theatre as well. The country was virtually cut off from the rest of the world for two centuries from the mid-1600s to the mid-1800s, but when it discovered what European theatre was like, it eagerly embraced the major European playwrights: Shakespeare, Ibsen etc.

So in the late nineteenth century two great theatre cultures collided in Japan. Some thought Kabuki should be protected at all costs, others that it could modernise by adopting Western conventions, for example that female parts should be played by actresses.

In the 1920s the idea grew strongly that traditional theatre should be rejected and an entirely new Japanese theatre, based on the European model, should be developed. All traditional Japanese theatre had been non-realistic - presentational rather than representational - so establishing realism in playwriting, acting and directing became a priority.

Then in the 1960s realism itself was rejected and "underground" theatre - we might use the word "fringe" or "off-Broadway" - burst onto the scene. Radical politically and open to anything in its performance techniques, this heady mix of kaleidoscopic styles and raw emotions re-energised theatre in Japan. It developed into the "little theatre" (shogekijo) movement, experimental theatre performed in small acting spaces.

In the early twenty-first century much contemporary theatre has been going through a calmer and more contemplative phase.

Over the past century while these new developments have been taking place almost nothing from the past has been lost. Japan's theatre is so extraordinarily rich that in a short stay there you could see everything mentioned here and a lot more. There are not many places in the world where you can see fourteenth-century theatre one day, realistic theatre the next, eighteenth-century puppets the next and an ultra-avant garde show the day after.

So how do you go about planning your theatre-going in Japan and getting tickets? The easiest way is to leave this to InsideJapan Tours. However, you can do some preparation before you go by reading A Guide to the Japanese Stage, From Traditional to Cutting Edge by Ronald Cavaye, Paul Griffith and Akihiko Senda (Kodansha International 2004; Amazon refer to it wrongly as World of the Japanese Stage). There are good articles on traditional theatre in Wikipedia: Kabuki, Bunraku and Noh.  There are many video clips of all three on YouTube.

Brian Powell
Author of Japan's Modern Theatre, a Century of Continuity and Change