Though we may think of a geisha as an elegant figure with white make-up, red lips, elaborate hairstyle and an intricate kimono, this image is actually more typical of a maiko, or trainee geisha.

Today's geisha are gatekeepers of Japan's traditional arts, spending their whole lives mastering classical music, dance, games and conversation. Even geisha who have been fully qualified for many years continue to practise every day, never allowing her skills to become rusty.

During the Allied occupation of Japan after World War Two, many Japanese prostitutes dressed in kimono and imitated the look of geisha to attract American clients, who were unable to tell the difference between these false "geisha girls" and the genuine article. This misconception damaged the reputation of true geisha, who are not courtesans but highly skilled artists.

Though we may think of a geisha as an elegant figure with white make-up, red lips, elaborate hairstyle and an intricate kimono, this image is actually more typical of a maiko, or trainee geisha. 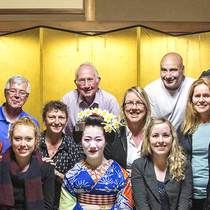 Private audience with a maiko
InsideJapan are proud to offer an exclusive, private meeting with a Kyoto maiko.
Read more
Print

The world of the Geisha

The distinctive white face, red lips and elaborately decorated hairstyle of the Geisha is an enduring image portrayed throughout the globe as the entrance to a world to which most of us mere mortals are not invited. From somewhat seedy beginnings, the current world of the geisha remains a mystery to most foreigners and Japanese alike.

Memoirs of a Geisha

Like most nations, Japan has always had some manner of pleasure quarter offering various forms of entertainment. As Japan cut off all contact with the outside world during the Edo era, the rich merchants of the cities continued to develop the arts of the country in the major urban areas.

With the many courtesans of the time providing one area of fulfilment, the merchants looked for other types of entertainment, including music, dance and poetry. From these early stages, the world of the geisha developed, providing a service to entertain and charm, working alongside the very desirable, and for most people unobtainable, courtesan.

As this form of entertainment progressed, the first geisha on the scene were actually men, appearing around the early eighteenth century. Women soon caught on, and the geisha as we know her today emerged with strict rules to not upstage the courtesans, or steal their clients. As courtesan entertainment waned after the mid-eighteenth century, geisha took their place, peaking around the 1900s in Tokyo.

Nowadays if you long to experience geisha culture, you must head to the cultural capital of Kyoto. Under a hundred geisha remain in the city, living and working in the traditional teahouses as they always have done. The inevitable declining numbers due to the strict and secular world make this profession as elite and enigmatic as it always has been.

The modern geiko (Kyoto term for geisha) starts her life in the Kyoto okiya (geisha house) these days around the age of 15, although traditionally it was much younger. After learning skills in hospitality and traditional arts, she will go on to become a maiko - an apprentice geiko.

The young maiko will follow her mentor and "older sister" geiko to appointments, shadowing her movements and observing the skill of repartee and reserve with the clients. As a professional entertainer, the geiko's role is not only to play music and dance, but also to make the customers feel at ease with witty conversation and even join in drinking games as the night progresses. As an amateur, the maiko is not expected to be as charming and amusing, and instead relies on ornate jewellery, rich kimono and young looks to speak for her.

Geiko and maiko may have many appointments per night, starting around 4pm and working long into the early hours, scurrying from from bar to bar on their wooden geta sandals. Typically, they will take Sundays off, changing into jeans, wearing their hair down and going shopping like any other young woman. If you're walking around Kyoto on a Sunday, you may be passing by a geisha without even realising it.

If you wish to meet, and even drink with a maiko or geiko, it's all about who you know - and they don't come cheap. Most only work at licensed ochaya (teahouses) in the geisha districts, often veiled behind anonymous wooden doors, with small discreet signs that most passersby wouldn't detect.

For many Japanese people, even those living in Kyoto, the closest they have come is perhaps glimpsing a geisha alighting from her taxi and disappearing behind a nameless sliding door. The ochaya manage to keep their reputation of exclusivity with expensive bar bills and membership-only rules.

As a maiko arrives at her appointment wearing sometimes hundreds of thousands of pounds worth of exquisite kimono, jewellery and hairpieces, it is imperative the ochaya knows she will be safe. The ochaya also bill their customers per month, keeping a running tab of drinks, taxis and geisha services, requiring a great degree of trust. Potential new customers therefore are only allowed to join if a current member recommends them, and is prepared to act as a guarantor.

Inevitably, due to the demanding lifestyle of the geisha and the pressures of the modern world, numbers are declining. Competing hostess bars, karaoke joints and the recent economic downturn have meant teahouses have had to be less restrictive and welcome new customers and even foreign tourists. If you have the cash to splash, you may have the opportunity to meet with a geisha, enjoy her company and play the requisite drinking games into the night.

The image of Japan is one constantly pushing forward into the future, and whilst some may say the geisha world is outmoded and losing its dignity, the links to the past and tradition in Japan are astoundingly enduring. As long as Japan continues to hold its rich and respected culture paramount, the world of the geisha as we know it will continue to survive.