Japan is open to tourists! Find out how to visit.
Drink

From matcha green tea to sake rice wine - there's plenty of homegrown tipples to quench your thirst in Japan.

Sake, or rice wine, is Japan's unofficial national spirit. Brewed from rice, the name "rice wine" is misleading as the fermentation process used is actually more similar to beer. What's more, the word sake in Japanese is used to refer to all kinds of alcohol; what we in the west think of as "sake" is more commonly called nihonshu in Japanese.

From matcha green tea to sake rice wine - there's plenty of homegrown tipples to quench your thirst in Japan. 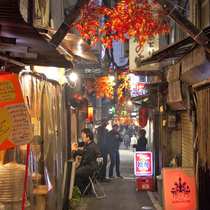 Japan is a country of drinkers - and a few rituals should be considered before taking a tipple. Never pour a drink for yourself; your friend or host should do this for you and you in turn should keep your companions' glasses filled to the brim! A word you'll hear quite often is kanpai - "cheers" in Japanese.

Unlike in the West, the culture of going out for just a drink does not really exist in Japan. Drinking is almost always accompanied by a meal or otsumami (a light snack). Otsumami usually comes in the form of a plate of edamame (soy beans), surume (dried shredded squid) or arare (small rice crackers whose name literally translates as hailstones!).

Whilst sake (rice wine) is the national drink of Japan, lager-beer (pronounced "beer-ru" in Japanese) is the most popular drink. Widely available brands include Kirin, Sapporo, Suntory, and Asahi. They are all worth a taste and average about 5% abv.

Watch out for cheaper brands though - these are not actually beer at all but happoshu, a malt-flavoured beverage. This looks and tastes like cheap beer but the low malt content allows the brewers to avoid beer taxes! As for the sake, our advice is to have the cheap stuff (a little rough on the palate) hot, but drink the quality brands (strong and fresh-tasting) well chilled.

When times are hard and the strong yen pushes up the cost of a pint, a word worth remembering is nomihodai (drink as much as you like). Head to your nearest izakaya (Japanese drinking establishment which also serves food) for the best nomihodai deals - usually ranging from 2,000-3,000yen per person. Remember that the whole group have to be on the same deal and it is usually limited to an hour or two!

Many restaurants also offer similar deals even if not on the menu so it is worth asking as if you plan to stay in the same place for some time as it can work out cheaper than paying for individual drinks. Karaoke box is also a great place to pick up good drinking deals where you not only get utaihodai (all you can sing), but also nomihodai.

The drinks menu at karaoke box is usually extensive and full of brightly coloured drinks, a few spirits and a choice of one or two beers. British-style drinking establishments are limited to a handful of overpriced mock pubs usually found in the larger cities and are generally best avoided.

A wide variety of alco-pops called chu-hai are available. Get them from a konbini (convenience store) such as Lawsons, 7/11, Circle K or Family Mart, or in a restaurant or bar. Chu-hai are made from shochu, a spirit distilled from barley, sweet potatoes, or rice that can also be drunk neat.

Whisky is very popular amongst Japanese men - scotch is considered the best and is highly sought-after. Many Japanese whiskies are now gaining popularity in the west. The two biggest brands are Nikka and Suntory. Yoichi and Yamazaki are considered to be among the best whiskies in the world.

Drinks on the go

Japan is a nation obsessed with vending machines, and you will find one on almost every street corner. There is approximately one vending machine for every 23 people in Japan, the highest number per capita in the world.

With so many vending machines comes a vast array of drinks. More new soft drink beverages hit the market in Japan than anywhere else in the world. In a country seemingly obsessed with hatsubai (new products), 300 to 1,000 new fresh and funky flavours appear annually. For those that need a coffee or tea fix on the go, hot canned drinks are also available. Japan is even home to the world's only hot fizzy drink - Canada dry ginger ale!

Finally, we couldn't write an article about drinking in Japan without including tea. One thing the Japanese definitely have in common with the British is that they love a cuppa!

For tea connoisseurs, Japan is tea heaven. The Japanese word for tea is cha and there are countless varieties ranging from classic green teas through to the more unusual mugicha (barley tea), sobacha (buckwheat tea), genmaicha (brown rice tea), umecha (powdered plum tea) and many more.

Sado (Japanese green tea ceremony) is an ancient tradition with roots traced back to Zen Buddhism. Literally translated as "the way of the tea", the ceremony involves the preparation and drinking of tea.

As with all Japanese arts, sado requires years of study and perfection to master. Sado is widely taught in schools across Japan and still remains a popular hobby today. It is well worth watching a ceremony if you get the chance. The strict etiquette, graceful movement and elegance in which the way the tea is prepared, poured and consumed is quite a sight.