Japan is open to tourists! Find out how to visit.
Traditional sports

Sumo tournaments are a really exciting experience to incorporate into your Japan holiday and a great way to learn about traditional Japanese culture. We can arrange tickets to a tournament in Tokyo, Osaka, Nagoya or Fukuoka, where you can cheer on your favourite wrestler with a beer and a bento picnic along with legions of supporters.

Try your hand at a martial art

If you would like to try your hand at a traditional Japanese martial art on your trip to Japan, just let us know. We can arrange lessons in all kinds of styles - from karate and aikido to iaido and tatedo. 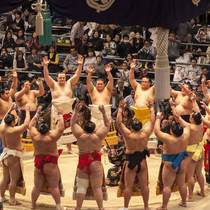 Japan's de facto national sport (although this is not an official status) is the enthralling and at times bewildering spectacle that is sumo.

Deeply rooted in Japan's culture, sumo has a history of over 1,500 years. Legend has it that the very survival of the Japanese people balanced on the outcome of a sumo match between the gods, and indeed sumo originated as a form of Shinto ritual. Though it has developed into a professional sport, elements of these rituals are still apparent, from the use of salt to purify the ring, to the shrine-like roof hanging above.

Sumo tournaments, or basho, take place every two months in Tokyo, Osaka, Nagoya and Fukuoka and are a truly fantastic way to spend the day. Though the pre-bout antics are strict and formalised, the fights are a spectacular blur of flesh, noise and power as the two man mountains attempt to push, pull or slap each other out of the ring, or onto any part of their body other than the soles of their supersize feet.

Though quintessentially Japanese, in recent times the number of foreign wrestlers has gradually increased and a growing number of non-Japanese excel at the sport and the complex set of cultural traditions it carries.

Take a bento lunch box, grab a beer and cheer on with the crowd as they rally their favourite rikishi to victory!

Kendo could be described loosely as "Japanese fencing", though the "swords" are today crafted from four substantial bamboo slats, usually held together by leather straps. Its origins lie in the Kamakura period (1185-1333) with the samurai, who needed to practice their swordsmanship.

They established "kenjutsu" schools for this purpose, and, with the influence of Zen Buddhism, it took on a rather spiritual as well as physical essence.  Over time the swords were replaced with the bamboo staves, and thick, protective body armour was introduced. Today kendo is practiced all over Japan and is a sport for all ages of participants.

Though arguably one of world's most famous martial arts, karate's beginnings are somewhat hazy. Often thought of as Japanese, the earliest antecedents of karate are said to have originated as far away as the Indian Subcontinent.

From there it passed into China, where it was developed and refined. Chinese traders brought these fighting skills to the Ryukyu Islands as early as the fourteenth century. Now incorporated in what is known as Okinawa, Japan's southernmost prefecture, the Ryukyus were once an independent kingdom with a culture completely distinct from that of Japan. It was here that karate as we know it today was developed.

Over hundreds of years various styles of these martial arts were practiced, and karate was not properly introduced to mainland Japan until the early twentieth century. The term karate originally meant "Tang hand" or "Chinese hand", but after World War Two the name (and character) was changed to mean "empty hand", which is also pronounced "karate" - an effort to develop the art in a Japanese style. Accordingly, karate features largely unarmed combat with a spectacular array of blows and blocks delivered by the fists, feet, legs and arms.

Aikido is sometimes loosely translated to mean "way of the harmonious spirit". It is a less overtly aggressive martial art that focuses on defence by redirecting the power and energy of the attacker, with the ideal outcome that neither the attacked nor the attacker is harmed.

Aikido was founded in the 1920s by Ueshiba Morihei. Morihei was born in Tanabe, located in the south of the Kii Peninsula. This is a remote, beautiful region to the south of Kyoto and Osaka and a place of great spiritual significance. This sense of spirituality became infused in the essence of aikido, as were aspects of Japanese dance, Shintoism, Buddhism, karate and kendo.

Of all of Japan's martial arts, Judo is perhaps the one that has spread most successfully around the world. The essence lies in the speed, subtlety and skill of using the size and strength of the opponent against themselves.

Judo is practiced both recreationally and professionally; the epic bouts are one of the highlights of every Olympic Games. Judo means "gentle way" and was created by a man named Kano Jigoro in 1882. The inspiration for judo was born out of the bullying that Jigoro witnessed at the English medium boarding school he attended in Tokyo, when he was just fourteen years old.

Jigoro wanted to be trained in the art of jiu-jitsu, an ancient form of self-defence favoured by the samurai. Though finding a teacher proved difficult, He eventually studied under two masters before founding his own school and dojo at Eisho-ji Temple in Tokyo, and from here judo came into being.

It's not all about sumo!

It may be the more traditional sports that spring to mind when thinking of Japan, and certainly sumo, karate and kendo have many participants and followers, but as with many aspects of Japanese culture there is plenty of modern influence sitting alongside the more historical aspects.

The undisputed king of team sports in Japan is baseball, introduced by an American at the end of the nineteenth century. Although happy to take on a foreign sport, the Japanese were keen that it should have a distinctly Japanese name, so whilst most other global sports are known by an approximation of their English name - for example tenisu, sakkaa and basukettoboru (did you get them all?), baseball is known as yakyu, meaning field-ball.

Kids get hooked on baseball young in Japan, with even primary schools having their own team, always decked out in full team colours. By high school competition for places is fierce, and the very best teams get to battle it out live on National TV in the All-Japan high school tournament, played at one of the largest stadiums in the country, seating 50,000 screaming fans!

Pro baseball has a massive following in Japan, with at least one match seemingly taking place almost every evening of the week from spring through to autumn, when the season climaxes with the play-offs and armchair fans across the country are glued to their screens.

But perhaps the ultimate respect is reserved for the handful of Japanese baseball players who ply their trade in the US Major League, such as Ichiro Suzuki (Seattle Mariners) and Hideki Matsui (formally of New York Yankees). Every pitch, swing and movement of these heroes is followed closely by the fans back home, and barely an ad break goes by without one or more of them endorsing the latest trend in clothing, motoring or refreshment.

Following in baseball's wake is soccer (or football as the InsideJapan UK office would insist). Many football fans of a certain age will recall England's Gary Lineker winding down his career with Nagoya Grampus Eight in the early 1990's, but the J-League might have slipped from their memory since then. However, both J1 and J2 (the two divisions) are still going strong, with colourfully named teams such as frequent champions Kashima Antlers (Kashima means "deer island") and Yamagata Montedio (combination of Monte and Dio, mountain and god in Italian - of course)!

Although not as popular as baseball, football has a strong following, and the focus on teamwork resonates strongly with the Japanese psyche. The national team, the "Samurai Blue", get fans hurrying to the bar after work to watch them compete in the Asia Cup, or (with mixed success) the FIFA World Cup, most notably as joint hosts in 2002 with Korea.

What else? Well, Japan has a handful of top golfers, both male and female, and getting out on the fairways (or even just the driving range) is a welcome break from the stress of business life for many salarymen in the cities. Volleyball is taken very seriously, with the women's national team highly ranked, and swimming is also a popular pastime, with the Japanese Olympic team taking home 11 swimming medals at the 2012 games in London - the largest amount received in any single event.

Add in figure skating (Japan has several world champions), pro-wrestling, rugby (Japan to host the 2019 World Cup) horse racing (one of Japan's few legal forms of gambling) and various forms of motorsport, and you have a rich mosaic of sports. Rest assured that although baseball and soccer may dominate the back pages, there is a sport for just about everyone if you scratch beneath the surface.

With such an ageing population one should not overlook the sports favoured by the elderly in Japan. Walk through the suburbs of any town or city early in the morning and you are likely to spot a game of gateball (a leisurely sport similar to croquet), and out in the countryside fishermen take to the lakes and rivers. Even less strenuous (and just about qualifying for inclusion under this topic!) are popular board games like shogi (Japanese chess) and go (a form of draughts/checkers).

And finally, no discussion of sport in Japan would be complete without a mention of pachinko. Huge arcades with garish neon signs house row after row of noisy vertical pinball machines, in front of which sit row after row of motionless (and emotionless) individuals, all waiting and hoping for the balls to drop in the right place. Sport keeps you fit they say?!