Kagoshima City is the capital of Kagoshima Prefecture. The city originally prospered as the castle town of Lord Shimazu, and was the first city to introduce Western civilization to Japan. Today, it is the largest City in Southern Kyushu with about 540,000 people. 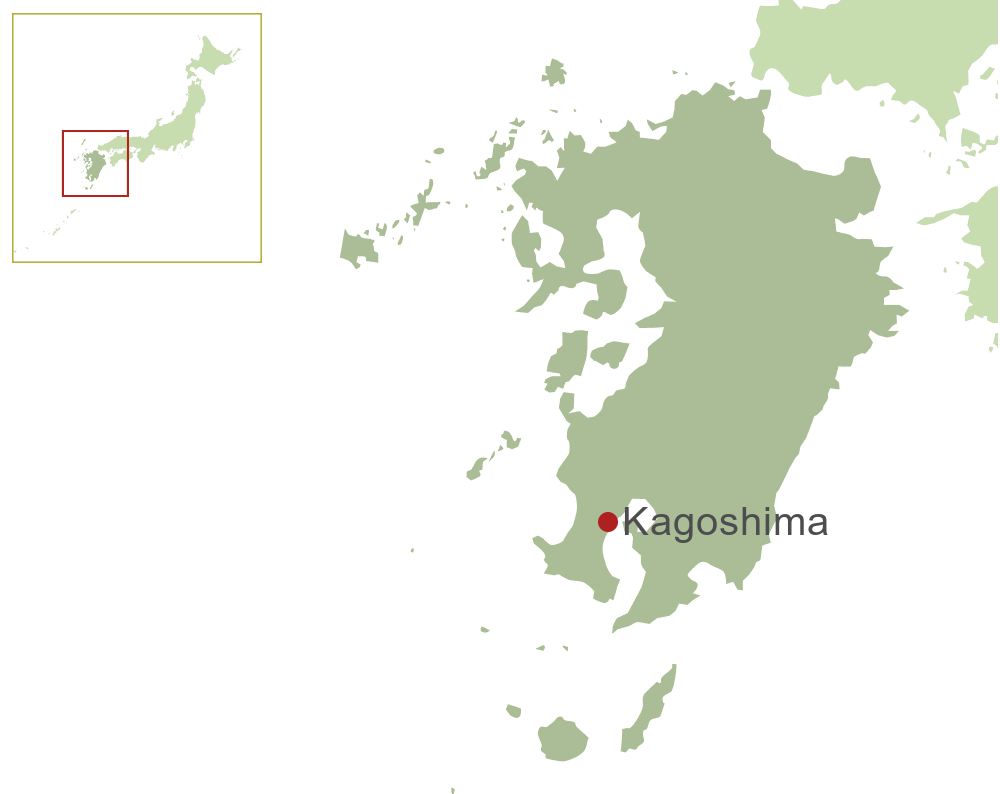 “Kagoshima is dominated by the impressive Sakurajima volcano - one of the most active in Japan. Watching the ash billow from the crater across the bay at least once each day never gets boring! Listen out for it rumbling away and keep an eye out for the ash-covered cars all over the city.”

Sakurajima, Japan's most active volcano, has watched over Kagoshima throughout history and continues to provide a dramatic, still-smoking backdrop to life in the city today.

Formed by volcanic eruptions beginning 13,000 years ago, Sakurajima is located in the Aira caldera - which is over 20 km (12 mi) in diameter. Sakurajima's first eruption occurred in 963 AD, and activity has continued to this day. Although most eruptions only affect the summit areas of the volcano, in 1914 a huge eruption (the most powerful in twentieth-century Japan) rocked the area, causing a lava flow to fill the narrow strait between Sakurajima Island and mainland Kyushu - turning it into a peninsula.

The lava flows continued for months, as the island gradually engulfed several smaller islands and filled Kagoshima Bay - causing tides to rise. Luckily, a series of earthquakes leading up to the eruption meant that most inhabitants of Sakurajima and the surrounding area had already fled to safety by the time the volcano erupted so the final death toll was relatively low (around 35 people).

Though Sakurajima has not erupted on such a scale since 1914, its activity did increase in 1955 and it has been erupting almost constantly ever since. Ash clouds rise to heights of several kilometres above the mountain, accompanied by the odd rumble, providing an endless source of awe for visitors. The 1,117 m (3,665 ft) volcano is particularly spectacular when viewed from Senganen Garden or from the Amuran Ferris wheel on top of Amu Plaza Kagoshima, and can be visited by taking the ferry from Kagoshima city.

Once on Sakurajima, one of the main attractions is to head to one of the observation points to watch the many eruptions take place in the Showa Crater on the Minami-dake peak's eastern slope. There are also some interesting lava trails, a "dinosaur park" and some hot springs to enjoy not far from the ferry port.

Besides its volcano, another fascinating aspect of Kagoshima is its rich history. A busy political and commercial port city; Kagoshima was the centre of the Shimazu clan's territory for several centuries before it officially became the capital of the Satsuma Domain - one of the wealthiest domains in Edo Period Japan (1603-1868). During this era Kagoshima served not only as the centre for Satsuma, but also for the Ryukyu Kingdom (modern Okinawa) - which was administrated by the Shimazu clan at the time. In 1877 Kagoshima entered the history books as the location of the last stand of Saigo Takamori - known as "the last true samurai" - marking the end of the Satsuma Rebellion.

Following this, Kagoshima became the birthplace of Japan's industrial revolution when seventeen of its sons risked their lives by travelling to England and the United States in order to bring back knowledge of Western science and technology - something that was expressly forbidden by the Tokugawa Shogunate at the time.

If you are interested in the fascinating history of Kagoshima, head to the city's Reimeikan Museum to find out more.

The following are our favourites from among the western-style hotels and Japanese-style inns of Kagoshima.

The Climate Guide for Kagoshima, Japan is perfect for planning your holiday. Monthly weather averages give the best indication of what the weather is usually like for every month of the year including figures for temperature, rainfall and sunshine.