Stand in the shade of a thousand-year-old Japanese cedar, visit a Bond villain's lair on an abandoned island and investigate a volcanic caldera lake on this spectacular exploration of Japan's rural south-western region. Read more >

Kyushu is the third biggest of Japan's four main islands, lying to the southwest of the country. Kyushu's cities are excellent proof that there is plenty of outstanding scenery, history and local cuisine to be found outside their famous cousins on Japan's main island. This is why your adventure will begin in the exciting hub of Fukuoka, not Tokyo, allowing you more time to see more of this little-visited region.

Nagasaki, famous as the second city to be hit by an atomic bomb during World War Two, is now a vibrant and cosmopolitan city. During Japan's long period of isolation it was the only port open to foreign trade, a fact that is still evident in the distinctly European atmosphere and style of architecture at Glover Gardens and Dejima "Exit Island".

Whilst here you'll take a cruise to the tiny island of Gunkanjima, or "Battleship Island". Once a densely-populated coal mine; now a haunting and dilapidated ghost town - this fascinating island served as the inspiration for the villain's lair in the 2012 James Bond film Skyfall.

Woven between these city stays you'll be introduced to lush countryside - from the ancient forests of Yakushima Island, the inspiration for Miyazaki's seminal animated film Princess Mononoke, to the wonderfully evocative traditional hot spring town of Kurokawa Onsen in the shadow of the still-steaming Aso volcano. 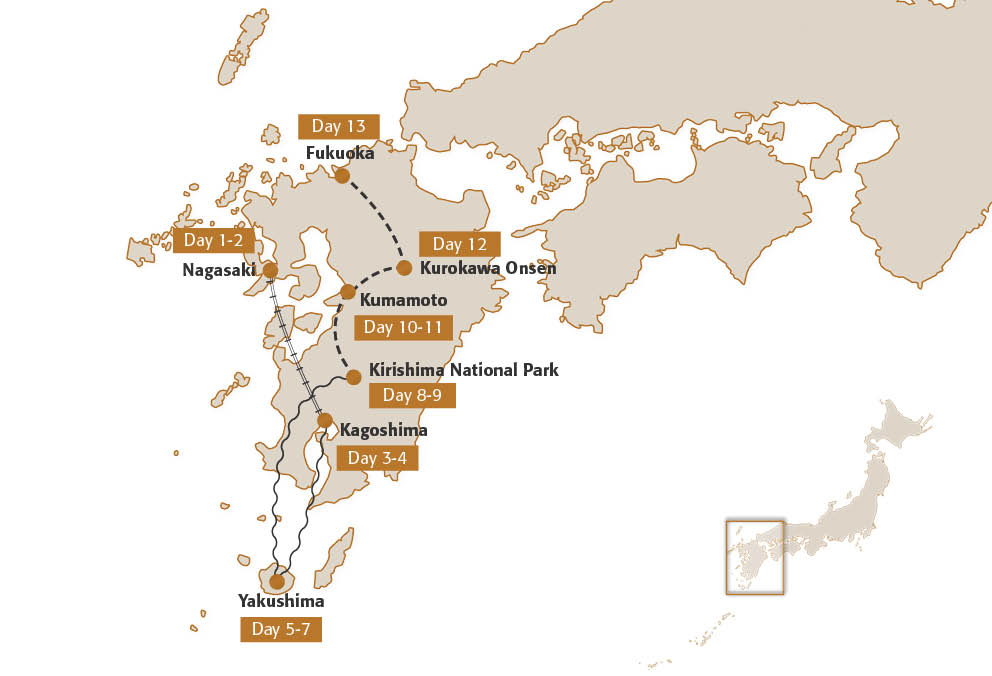 5.0 out of 5 from 1 review Show all Kyushu Adventure Reviews