Japan is open to tourists! Find out how to visit.
Toshogu Pagoda

Nikko is most famous for the ornate shrines and temples of Toshogu, the mausoleum of first Tokugawa Shogun built at great expense following his death in 1616.

Look out for the famous monkeys - known as Mizaru, Kikazaru and Iwazaru in Japanese - guarding the entrance to Nikko's Tosho-gu Shrine.

Lake Chuzenji and the national park

The national park area is one of the big draws to Nikko. Pictured here is the 100m high Kegon Waterfall which is the only exit point for water from Lake Chuzenji.

Nikko is most famous for the ornate shrines and temples of Toshogu, the mausoleum of first Tokugawa Shogun built at great expense following his death in 1616.

Meaning “sunlight”, the name Nikko is synonymous with splendour. This is mainly thanks to the elaborate and highly decorative mausoleum of the shogun Tokugawa Ieyasu, which lies surrounded by forest in a stunning national park. 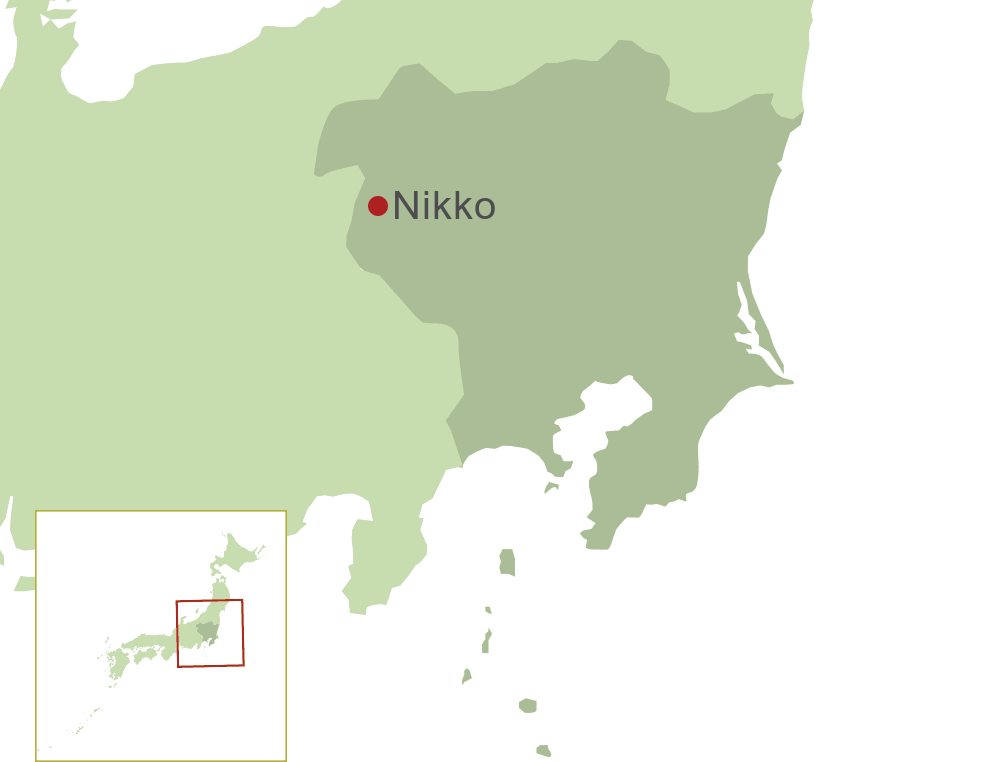 “You think you've seen Japanese temples, and then you go to Nikko. Tosho-gu is like no other: lavish, luxurious and vibrant, amid beautiful natural scenery.”

Tokugawa Ieyasu was the founding father of the Tokugawa Shogunate, Japan's last ruling clan, which existed between 1603 and 1868. Ieyasu is thus a figure of great historical significance, and his tomb, which lies within a large and elaborate temple complex near the small town of Nikko, a fitting tribute to so illustrious a personage.

Built in the mid-17th century and subsequently greatly aggrandised by Ieyasu's grandson, the location of this monument pulled Nikko out of the years of obscurity brought about by its decline as a training centre for Buddhist monks. The building of the shrine was also a shrewd political move: the vast cost of construction was passed on to the daimyo class (feudal lords), which limited their wealth and power and therefore reinforced the position of the Tokugawa dynasty.

Nikko has long been a heartland of spirituality and provides a rich variety of experiences. The first thing that strikes most visitors upon arrival is the setting: set amid thick forest and mountain scenery, the town is beautiful in all seasons - but particularly in the autumn, when the leaves turn their dazzling shades of red and orange.

Japanese religious buildings are traditionally characterised by simplicity and austerity, highlighting their function as places of worship. Tosho-gu Shrine (Tokugawa's mausoleum) stands in opposition to this idea. Brightly painted in reds and greens and embellished with a myriad elaborate carvings, Tosho-gu is more a celebration of the successes of the Tokugawa Shogunate than a tribute to the principles of Tendai Buddhism. This grandiose style has a tendency to polarise opinion - with some people calling it ostentatious and tasteless, while others laud it as some of Japan's most spectacular and beautiful architecture. Here at InsideJapan Tours we tend to lean towards the latter opinion!

Away from the crowds and into the hills around Nikko it is easy to understand why such a site is the centre of religious pilgrimage. The surrounding national park, including several beautiful waterfalls, many forested hiking trails and the stunning Lake Chuzenji, contains more than enough natural beauty to merit a longer stay if you have the time.

The following are our favourites from among the western-style hotels and Japanese-style inns of Nikko.

Nikko offers a wealth of exciting experiences that will help you get beneath the surface of Japan's fascinating culture. See below for a few of our favourites

The Climate Guide for Nikko, Japan is perfect for planning your holiday. Monthly weather averages give the best indication of what the weather is usually like for every month of the year including figures for temperature, rainfall and sunshine.