Japan is open to tourists! Find out how to visit.
Traditional sports

Karate developed in the Ryukyu Kingdom, now known as Okinawa - Japan's southernmost prefecture. Karate means "empty hand" in Japanese and was developed as a response to the banning of weapons in Okinawa by King Sho Shin in 1477.

Tatedo is a kind of mock sword fighting developed to train Japanese actors for combat in samurai films. Why not join a class in Japan and learn a few moves yourself? 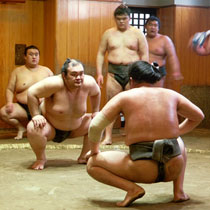 Insider Experience: Sumo stable visit
Step inside the world of sumo wrestling with a visit to a sumo stable in Tokyo to see a morning…
Read more
Print

Marvel at the skill, strength and endurance of Japan's traditional sports, which all have a beautiful spirituality thanks to an emphasis on mental training, concentration and purity of mind.

Sumo is Japan's national obsession. Practised for centuries, a sumo bout (which is usually over in a matter of seconds) is as much a religious ceremony to appease the gods as a sporting battle. InsideJapan can arrange tickets to the six annual sumo tournaments or provide you with the chance to visit a sumo stable to watch the wrestlers' early-morning training session.
Sumo wrestlers are professional, but most Japanese martial arts are practised by amateurs, albeit to a very high standard. Karate and judo are world famous, while there are plenty of martial arts little known outside Japan, such as kendo fighting with wooden sticks, kyudo archery and aikido wrestling. InsideJapan can arrange hands-on lessons in all of these.
Some "traditional" martial arts on these pages really aren't so ancient at all, although they are certainly very Japanese. For instance, tatedo is the new practice of stage fighting with wooden sticks or fake swords - studied by wannabe stars of samurai films!