Niigata city is capital of the prefecture of the same name, and is a pleasant place, with plenty of open spaces, making the city feel more spacious and less cramped than other major cities of Japan. Delicious sake, top quality rice and fantastic seafood are just a few of the reasons to visit. 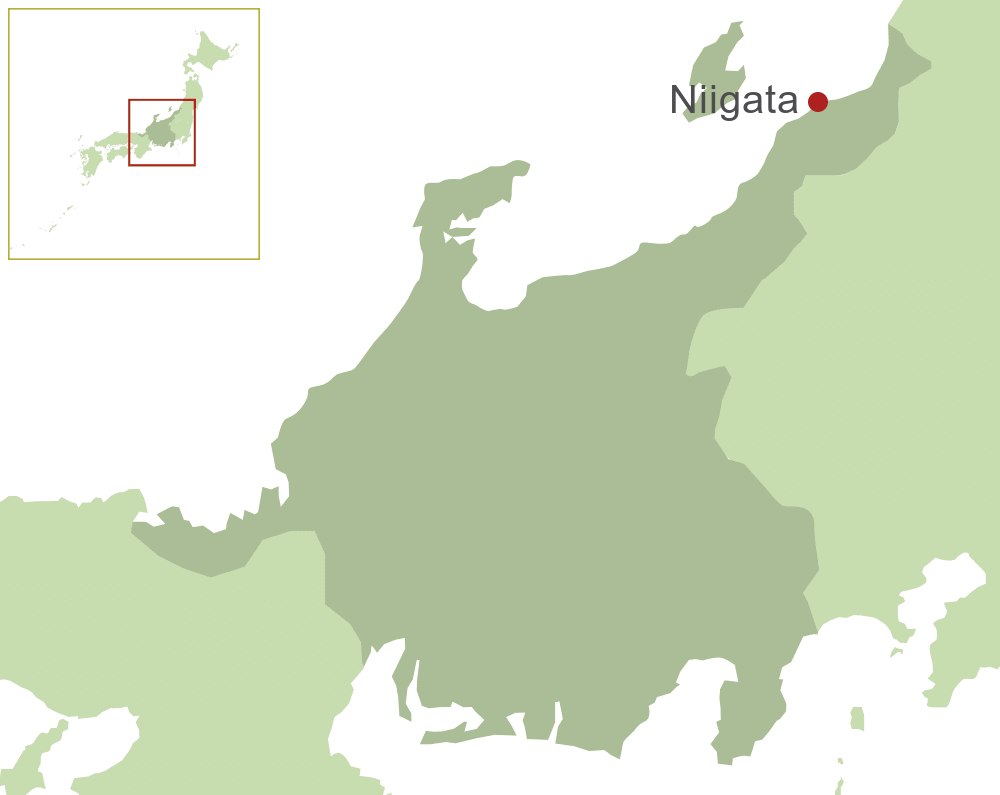 “Niigata was my home in Japan for two years and leaving was one of the hardest things I have had to do. It is a very agreeable city, surrounded by beautiful countryside, offering the chance to see some of urban Japan beyond the bright lights of Tokyo”

The Japanese characters for Niigata literally mean ?new lagoon' in reference to various inland bodies of water. Today Niigata is known as ?the city of water', and for good reason! Two major rivers flow through the city, including Japan's longest, the Shinano; the city is an important port on the Japan Sea Coast and the surrounding low-lying countryside is one of Japan's largest areas of rice cultivation. Some of the city's major roads were previously canals, and the willow trees that lined them remain today along the sides of the road, adding to the city's sense of nature and space.

Niigata grew up as a port town, and regional centre, and became one of a handful of cities to be opened up to trade with the outside world after the Meiji Restoration of the 1860's. The city's international links have continued to this day, with flights to the Russian Far East, regular visits from a North Korean freighter and major invasions of both English and Irish football fans during the 2002 World Cup! Niigata also hosted a minor meeting of the 2008 G8 Summit, the main events of which were held on the northern island of Hokkaido.

If you are visiting Niigata you are almost certain to arrive or depart on the famous Shinkansen (bullet train). Niigata's Shinkansen link to Tokyo was completed in the early 1980s, much as a result of the work and influence of Niigata's Kakuei Tanaka, who briefly served as Prime Minister of Japan in the 1970s. The line was built at a massive cost, requiring huge amounts of engineering works to negotiate the mountains and valleys that lie between Niigata city and Tokyo. These two cities apart, the line passes mainly through tiny backwater towns, leading critics to suggest that the line was essentially nothing more than a quick commuting route for Tanaka. Inevitably the Shinkansen line from Niigata to Tokyo is the most expensive route in all of Japan, so enjoy the trip!

Services were suspended on the line in 2004 when a strong earthquake struck in the southern part of Niigata Prefecture, derailing a moving train for the first and only time in the history of the 'Bullet Train'. Fortunately, a combination of Japan's Shinkansen technology and lucky timing (the train was moving relatively slowly between two nearby stations) meant that not a single major injury was reported.

Niigata's sights include Hakusan Shrine and Gardens, the former Prefectural Parliament Hall, Bandai Bridge across the Shinano river and the street markets in the old Furumachi district. Be sure also to take in the views of Niigata and its surrounding countryside from the observation decks of either the Next 21 building in Furumachi or the Toki Messe convention centre near Niigata port. On a clear day you can see as far as Sado island, for which Niigata serves as a transport hub.

Although Niigata city only has a few days of heavy snow each year, the surrounding countryside is one of the snowiest places on earth, with cold winter winds from Siberia picking up moisture over the Sea of Japan and then dumping it over the mountains of Niigata prefecture, inland from the city. This gives Niigata some of the best winter sports conditions in all of Japan. There are also plenty of onsen (hot-spring) towns dotted through the mountains, perfect for a relaxing soak!

Niigata is famous for the quality of its rice, and therefore also its sake (with top quality rice being a primary ingredient), so be sure to sample some of each during your stay. The city is also a great place to sample fresh fish and seafood from the Japan Sea. Niigata also has more than its fair share of international restaurants, serving both the Japanese and the sizeable international community of the city. If you would like any specific recommendations Harry Sargant of our UK office, and Niigata resident for 2 years will be happy to advise!

The Climate Guide for Niigata, Japan is perfect for planning your holiday. Monthly weather averages give the best indication of what the weather is usually like for every month of the year including figures for temperature, rainfall and sunshine.