The snow-capped summit of Fuji-san is an icon of Japan; a glorious, near symmetrical volcano which stands alone, soaring to the heavens, a constant reminder of Japan's age-old relationship with the earth and the spirits within. For the Japanese, Mt. Fuji is a lot more than just another mountain. 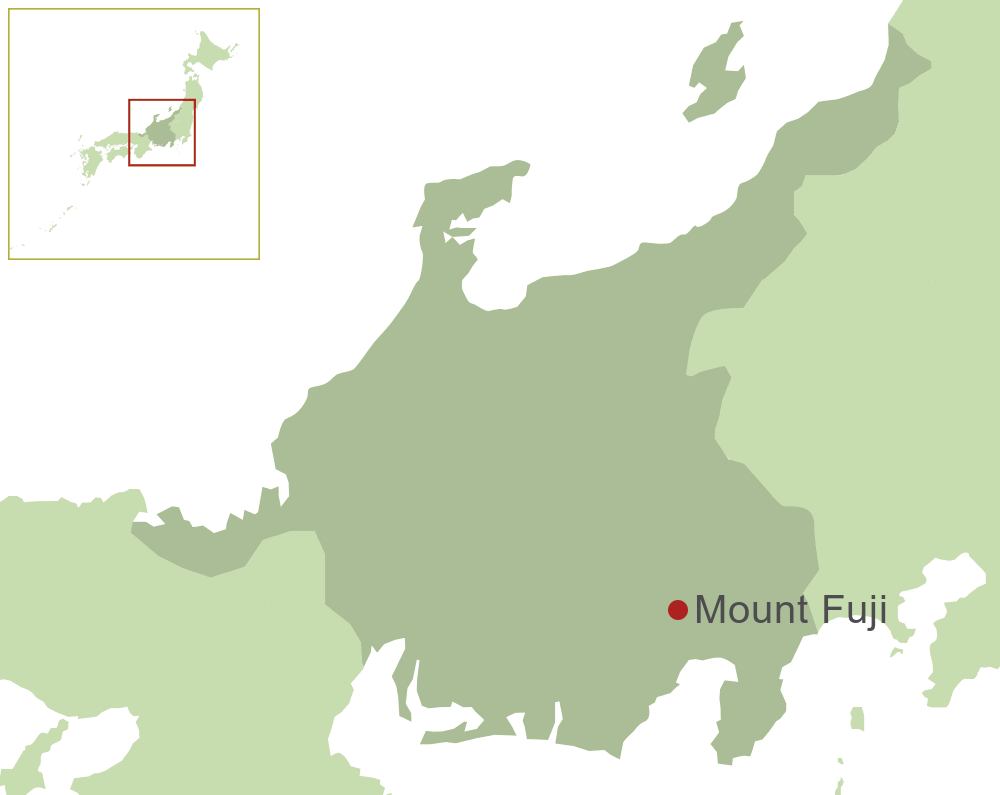 “From my first climb in 2000 Mt Fuji has always been for me, the most beautiful symbol of Japan. The sunrise I witnessed in 2001, as the world far below me was suddenly bathed in the shining light of a new day will stay with me forever, a true magical moment”

Located 59 miles as the crow flies from central Tokyo, Mt. Fuji straddles the prefectures of Yamanashi and Shizuoka, both claiming the mountain as their own. The summit is 3776 m (12,388 ft) above sea level and marks the highest point of Japan. Every year tens of thousands set out on one of the four trails to conquer the  summit, many climbing over night with the hope of spectacular sunrise to reward the strenuous effort required to make it to the top.

Fuji-san is an active volcano. The last major eruption started on 16th December, 1707 (in old Japanese years, Hoei 4, 23rd Day of the 11th month) and ended around New Year's Day 1708. The Great Hoei Eruption blew a large crater in the side of the mountain, approximately half way up on the south-western slope, spewing and ash and cinders over vast swathes of the surrounding area including Musahsi Province, home to Edo City (modern day Tokyo). The disaster was compounded a year later when the large volume of ash which fell in the immediate vicinity of the mountain caused destructive flooding which directly caused the permanent decline of Odawara City which at the time was one of the most powerful in all of Japan with its position as the gateway to Edo.

Fuji-san is currently listed as being of low risk of eruption although a dramatic increase in low level seismic at the base of the mountain caused a lot of chatter amongst Japanese volcanologists between 2006 and 2008. The mountain has since calmed down and returned to a very dormant state.

Climbing Mt Fuji
The first climb to the summit of Mt. Fuij is said to have been made by a Buddhist Monk in 663 whose name is now lost in the annals of time. Today, around 200,000 people a year make the trek to the summit of this sacred mountain, some thirty percent of them foreigners.

Official climbing season is between 1st July and 31st August although a few weeks either side of these dates many of the mountain huts are open offering a place to bed down for a few hours on the way to the top. There are four routes to the top, Kawaguchiko, Subashiri, Gotemba and Fujinomiya. The usual path is to start at the 5th station of one of these routes, Fujinomiya being the closest to the summit at 2400 metres and Gotemba being the furthest at 1400 metres. It is possible to climb from the base and these historical routes are gradually increasing in popularity as they offer many historical sights such as temples, shrines and tea houses. There have even been sightings of bears along the Yoshida Trail but these impressive animals tend to shy away from contact with humans. The summit can be extremely cold, usually around freezing throughout the climbing season so make sure you are well prepared.

Viewing Mt Fuji
Without a doubt the best views of the mountain are to had from the Fuji Five Lakes area to the north of the mountain. perhaps the best of all are from Lake Kawaguchi and this area can be easily accessed from Toyo by bus from Shinjuku. Hakone, a national park area just to the south of Fuji-san, also offers spectacular view points especially outside of the warmer months when heat haze tends to obscure the mountain.

Mt Fuji is one of the symbols of Japan and a chance to see this iconic mountain is sure to one of the highlights of any visit.

The following are our favourites from among the western-style hotels and Japanese-style inns of Mount Fuji.

The Climate Guide for Mount Fuji, Japan is perfect for planning your holiday. Monthly weather averages give the best indication of what the weather is usually like for every month of the year including figures for temperature, rainfall and sunshine.