With white sandy beaches, clear blue seas, dense jungle, rare wildlife and warm, laid-back inhabitants – this really is an island paradise. This itinerary gives you the chance to explore Okinawa's wealth of natural beauty and unique culture by hopping between the islands of “Japan's Hawaii” Read more >

Wherever you head in the Okinawa Islands you will find your surroundings rich in Ryukyuan culture, whose survival through both Japanese invasion and American occupation is testament to its strength and resilience.

Shuri Castle in Naha stands out as a symbol of this former kingdom, its distinctive Chinese-influenced architecture a legacy of Okinawa's past as an important trading nation.

The first stop on this itinerary will be Ishigaki Island, the gateway to the Yaeyama island chain - where world-class snorkelling and diving opportunities abound. From here, a short ferry will bring you to Taketomi for an exclusive stay in the red-tiled cottages of this island retreat.

The dense forests of Iriomote will be your next port of call, where a day of kayaking through mangroves and trekking to the top of the waterfalls will introduce you to the outstanding natural beauty of Japan's southernmost group of islands.

Before you return to Tokyo you'll make a final island stop on Tokashiki Island, part of the Kerama Island group. Tokashiki is the quintessential tropical paradise, known for its stunning beaches, warm waters and laid-back pace of life. If you visit between January and April you may even be lucky enough to catch a glimpse of migrating Humpback Whales! 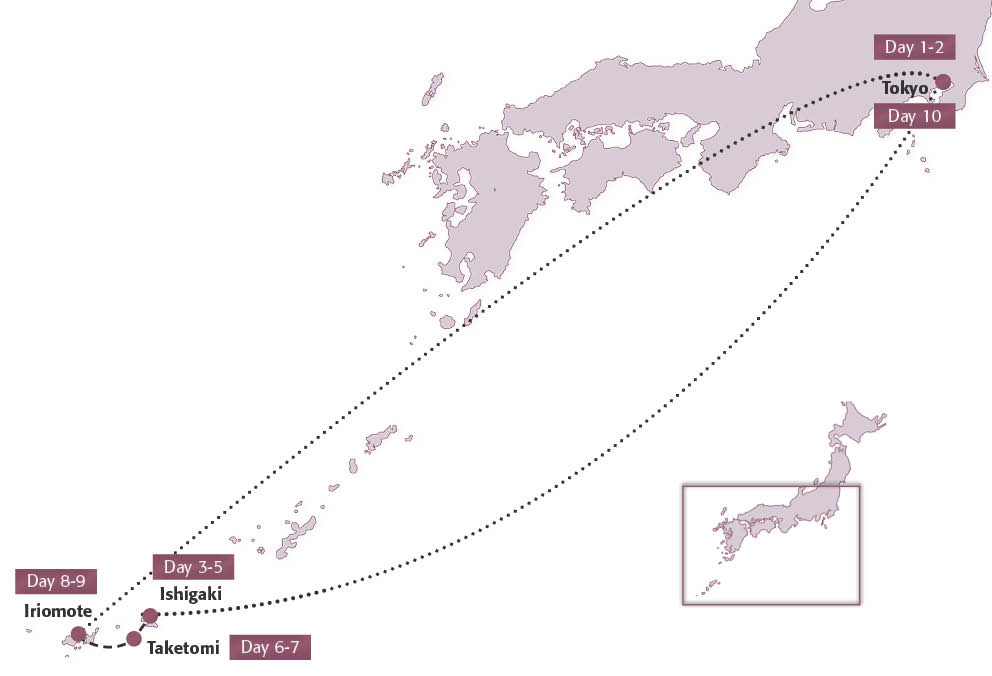 5.0 out of 5 from 1 review Show all Japan Island-Hopping Reviews