Sado Island is the sixth-largest island in the Japanese archipelago, lying just off the city of Niigata on the Japan Sea Coast. With beautiful coastal scenery, a slow pace of life, and fascinating history, Sado makes an unusual yet highly rewarding addition to an adventurous itinerary. 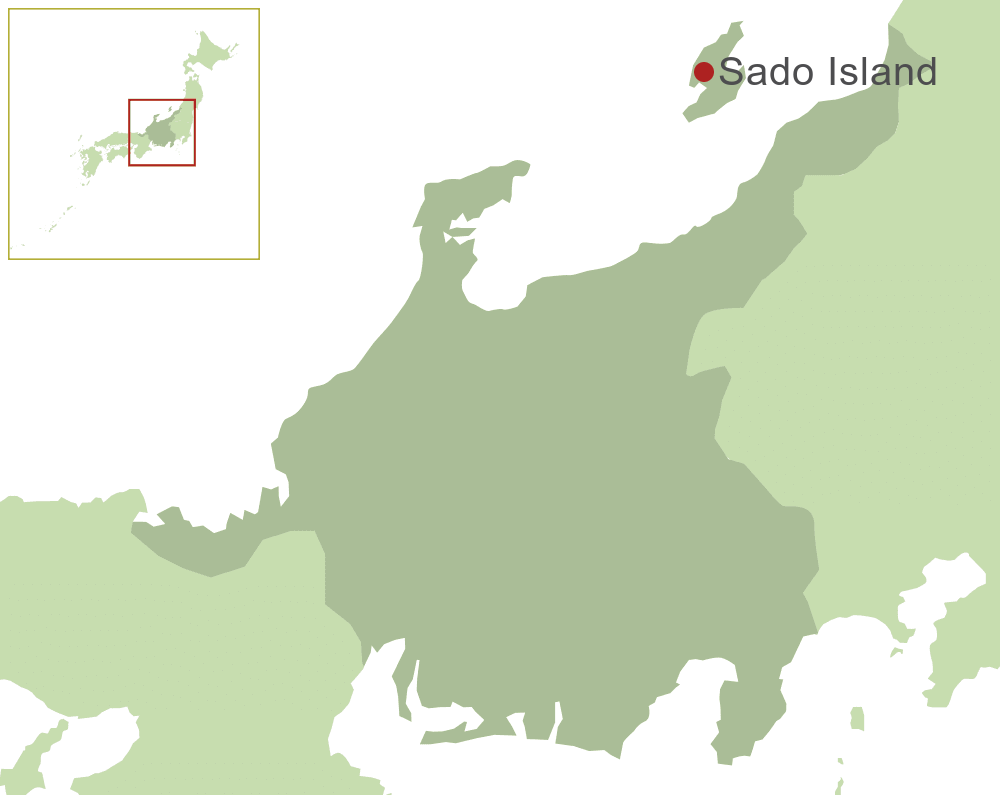 “With its untouched cedar forests and rocky bays, this wild island is perfect for exploring by foot, kayak or bike.”

Sado Island (AKA Sado ga Shima) is perhaps one of the most interesting and distinctive places in the whole of Japan. The island's history is a long and varied one: for hundreds of years this was a place of bleak exile - the harshest punishment short of death that could be handed out.

From the 8th century onwards, Japan began to use Sado Island as a place of exile for its inconvenient or disagreeable figures. The first exile to the island appears to have been the poet Asomioi Hozumi, who was sent to Sado in 722, and other notable figures include the former Emperor Juntoku, sent in 1221, and the Noh playwright Zeami, whose banishment began in 1434. The fact that many of the exiles to Sado were dissident intellectuals and artists meant that during this time, Sado benefited from an influx of culture, philosophy, art and architecture from the mainland - factors that helped to provide the foundations for the island's culture and traditions. Examples of these outside influences on Sado are evident in that the island is still dotted with Noh theatres, for example, or in the fact that Sado dialect differs substantially from that of mainland Niigata.

The discovery of gold in the West of Sado Island in 1601 changed the course of history for the island, and heralded the beginning of an economic boom followed by a steep decline. Tens of thousands of people flocked to the island in search of fortune, and the Japanese government began to send a different kind of exile to the shores of Sado. The homeless of Edo city (now Tokyo) were rounded up and set to work in the mines in conditions no better than slavery, their labours producing huge revenues for the Tokugawa shogunate.

Sado Island's gold rush peaked in the early seventeenth century, during which time the mine had the highest gold production volume in the world. Aikawa district, which had until then been a poor village, swelled to a settlement of over forty thousand people, and the island prospered. By the end of the Edo period in the mid-nineteenth century, Sado Island's gold began to run out, and the island itself relapsed into obscurity.

Today, Sado Island is known for more positive reasons. Its tracts of open mountainous countryside, rugged coastlines, hidden beaches, grottoes and fishing villages have made it a modestly popular tourist destination amongst the Japanese - though it is still little-known in the international community. Sado is probably most famous today for its excellent taiko drummers, who have won international renown for their superior skill. We certainly recommend visiting the Sado Island Taiko Centre, where you can learn about the history of taiko and have a go on the drums yourself. We also highly recommend a visit to the Sado Gold Mine, where you can explore sections of the old mine on a guided tour.

Sado Island can be reached from Niigata or Naoetsu by ferry (2.5 hours), from Niigata by jetfoil (one hour), or from Teradomari by high-speed boat (one hour). Once there, we highly recommend hiring a car for your exploration.

The following are our favourites from among the western-style hotels and Japanese-style inns of Sado Island.

Sado Island offers a wealth of exciting experiences that will help you get beneath the surface of Japan's fascinating culture. See below for a few of our favourites

The Climate Guide for Sado Island, Japan is perfect for planning your holiday. Monthly weather averages give the best indication of what the weather is usually like for every month of the year including figures for temperature, rainfall and sunshine.