Situated in the north of Kyoto Prefecture, a two hour train ride from Kyoto city will take you through rice fields and lush mountain forests to this pretty coastal town on Tango Peninsula which protrudes northward into the Japan Sea - a world away from the crowded sites of the former capital. 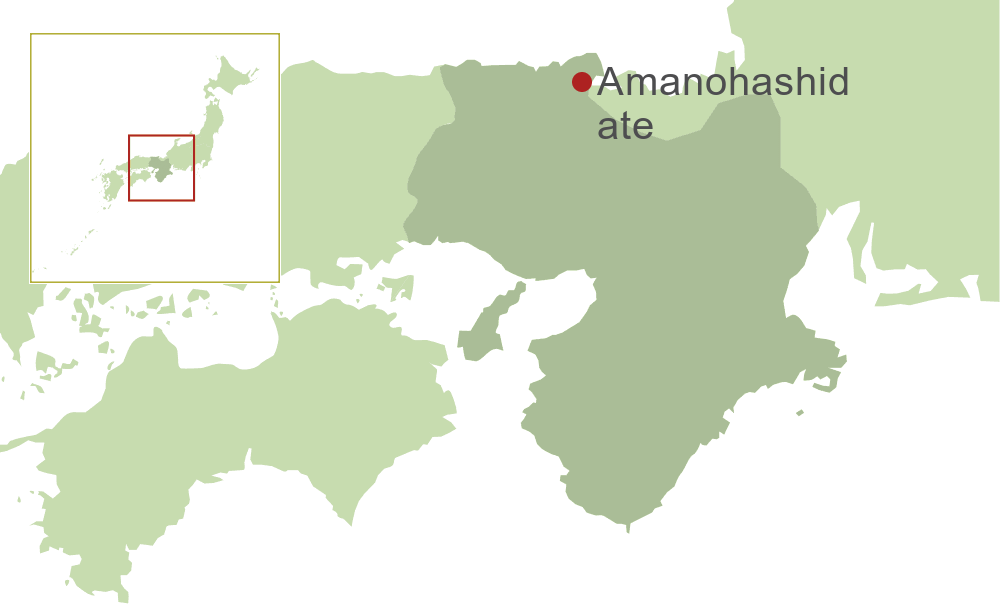 “The ‘ladder to the heavens' – a unique geographical formation considered one of the three most beautiful sights in Japan, yet rarely visited by Westerners. Go for the stunning views, delicious seafood and warm hearted people”

The Japanese love to rank their famous sights and the town of Amanohashidate derives its fame from the fact that along with Matsushima and Miyajima, it is regarded as having one of Japan's three greatest views, or Sankei in Japanese. (The town has also won acclaim in many smaller categories including top prize in the ?Japanese White Sands and Green Pine Categories'!).  This claim originated with scholar Hayashi Razan in 1643 and any visit there will show why.

Amanohashidate roughly translates as ?ladder to the heavens'.  According to the ancient book Ko-Fudoki, the ladder was built by the deity Izanagi no Mikoto as a means of travelling between heaven and earth where his lover Izanami no Mikoto, another god, lived.  One day Izanagi no Mikoto carelessly fell asleep on earth and failed to return to the upper world before nightfall.  The ladder fell to the ground, becoming the Amanohashidate sand spit and the link between heaven and earth was forever broken.  The story ends happily, however; legend has it that the gods conceived the Japanese archipelago at Amanohashidate, to which Izanami no Mikoto later gave birth!

There are actually two stunning vistas to be enjoyed of the 3.6km (2.2 miles) sandbar connecting the spa town of Amanohashidate - ladder to the heavens -and the opposing side of Kasamatsu - Pine Umbrella. The view from the hill behind Amanohashidate provides sweeping panoramas of the entire bay and the eastern sandy beaches of the sandbar, as well as Kasamatsu's pagoda standing guard above. On the opposite side, the Kasamatsu view can be enjoyed after a cable car ride to the viewing area and gives a totally different perspective of the sandbar's western shore and its shingle banks. Tradition has it that the views be enjoyed upside-down by bending over and looking back through one's legs. This is supposed to give the illusion of the bridge floating up to heaven and travellers have performed this ritual for centuries.

The town of Amanohashidate itself is split into two halves on either side of the bay and it is these which are connected by the narrow sand spit.  The spit is just 20 to 70 metres wide and stretches for 4 kilometres separating the Sea of Japan from Asoumi Lagoon.  The sandbar is dotted with secluded picnic areas, temples, and even an antique Japanese naval gun, and makes for a relaxing one hour stroll or a wonderful 20 minute bicycle ride on one of the many local rental bicycles. We're not sure who counted them, but 7,000 ancient pine trees line the narrow strip of land making a brilliant green stripe across the sea.

As an alternative, a small ferry sweeps back and forth across these charming waters between the temple area of Amanohashidate and the Ichinomiya jetty at Kasamatsu. The area is famous throughout Japan for its traditional rice wine. There are two distilleries making traditional Japanese saké in the Amanohashidate area and both are open to visitors. The most famous is the nationally renowned Hakurei Shuzou Saké Brewery, with the Ine Shuzou Saké Brewery more popular with locals as it produces unusual coloured and flavoured brews, in particular red and pink sake made from red rice.

The people of Tango Peninsula are some of the friendliest people in Japan.  Western visitors are rare here so the locals will be very curious to know where you've come from!  Their warm hearts are matched by the hearty local food.  Seafood is of course on the menu and the winter crab is delicious.  And of course, you can wash it down with a glass of sake from the local breweries!

As birds of prey, Japanese cranes and a variety of seabirds glide above Amanohashidate's sedate temples and charming waterways, you can sit back and relax in one of Japan's most charming and enjoyable places to visit.

The Climate Guide for Amanohashidate, Japan is perfect for planning your holiday. Monthly weather averages give the best indication of what the weather is usually like for every month of the year including figures for temperature, rainfall and sunshine.