Skip to content
Thank you for signing up!
Subscribe to our Newsletter
HOME » Blog » Interview: Jonathan Ross on Japan

Jonathan Ross, the multi award-winning television and radio presenter, actor, comedian, anime enthusiast and creator of Japanorama (our favourite TV series) talks to us about his love affair with Japan.

Japanorama was one of the best shows ever in relation to pop culture in Japan, what was your inspiration?

I’ve always been a comic book fan, but I fell in love with Japan when I discovered Japanese comics. I loved the difference between them and American comics, which I still adore. It was a step on from that to anime, I’ve always liked science fiction stories but obviously Japan has a unique cultural take on that kind of thing.

[Japanorama] was the chance to go out there and talk about the culture in a way I hoped would not be… I don’t want to be negative about other people, but when I’d seen shows on TV like Clive James in Japan, even though I enjoyed them, they came from the angle of “look at these funny people”. I never felt comfortable with that, I’ve always been so admiring of the differences. I never thought it was ‘silly’ or ‘weird’, I always thought it was exciting and different. That kind of sums up Japan for me – exciting and different.

Do you have a favourite place?

You know what? I can never pick favourites. If you’re talking about a family place, we loved Hakone and the open art gallery sculpture garden. The onsen at the ryokan we stayed at was just beautiful. It was a lovely experience, incredibly comfortable and wonderful food; we like to think of ourselves as good travellers because we are always respectful, like when we had… what are those big feasts?

Yes, the kaiseki dinners. Sometimes you’re given things I’m sure some Western people would say “I can’t eat this” to, but we always provide them with an empty plate! We’re not really gallery or museum goers on holiday, and we’re not big shoppers; we like activities more than anything so normally we wouldn’t think of going somewhere like that, but we loved it.

The Ninja Dojo lesson was great – the guys there were tremendous and welcoming; we’re mixed abilities, but they made us all feel included. It was fascinating as well, because you learn so much about the history, which has been widely misrepresented in the media. Fake food making in Tokyo was great fun too. What we also liked – but people do have to be a bit more adventurous – is Nagashima Spa Land. I think we were the only Westerners there, it was a lively, joyful place.

How would you rate Japanese theme parks? You’re a bit of a fan, aren’t you?

I recommend Fuji-Q to everyone, the hotel there wasn’t particularly high-end, but it was still luxurious and comfortable, and the people were super friendly. In Japan, you’re also lucky because you’ve got DisneySea. I would suggest that to any Western travellers because it’s recognisably Disney, but also uniquely Japanese. There are rides that only exist there and the food and culture is very different. Also, we’re still collecting Pokémon; if you want to catch Pokémon, we’ve never got so many as from walking around there.

Pokémon Go lives on in the Ross family?

Yes! I’m on level 37. There’s one Pokémon you can only get in Japan called Far Fetched. My wife got it first and I was slightly resentful of her until we all managed to get one.

Do you have any tips for people who are new to anime?

One of the things that’s joyful about anime is there are so many genres, so almost anything you might be into already, you’ll find an anime about. The classic is Studio Ghibli. You should find a way to go to the Ghibli Museum, there’s a mini sequel of My Neighbor Totoro which they only show there.

Any recommendations for first-time visitors to Japan?

Explore different areas of Tokyo, and if you can afford to have a driver for a few days it’s good to have someone with local knowledge. Do a bit of research yourself too so you get an idea of what’s available. You guys are great and know so much, but you can’t be mind readers so it’s good to know what you’re excited about.

If anyone’s interested in vintage Japanese toys or movie posters, they should take a trip out to Nakano Broadway. For people like me who like that kind of stuff, it’s heaven. The cookery class was also fun, as was the mother of pearl workshop. The people were sweet and very calm, and we came home with a nice tray.

You’ve mentioned people a lot through this, Japan is largely about the people isn’t it?

It’s a mixture of the people and being a spectacular place to go to. There’s breathtaking natural beauty but also some remarkable man-made attractions. If you’ve got little kids, spending the morning at SEGA Joypolis over in Odaiba or Sunshine City and Namja Town is amazing.

There are so many things when you’re there, like an aquarium on the top floor and a dog petting area. It’s a good place to go when you arrive. The first day is often a bit arduous because you’ve got that terrible jetlag and you need to stay awake. The hotel probably isn’t ready for you for four or five hours, so leave your bags and go somewhere that’s noisy. Immerse yourself into it and keep awake for a few hours with something that’s easy on the brain.

To plan your own activity-packed adventure to Japan visit our Experiences page or get in touch with our Japan experts.

This interview was published in the last issue of east magazine. Sign-up to receive a copy through the post twice a year for FREE! 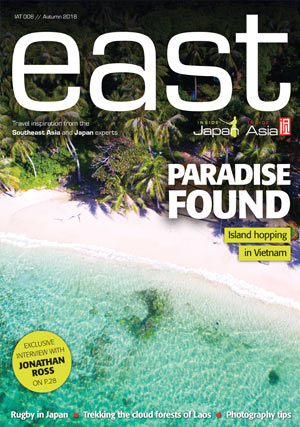