Skip to content
Thank you for signing up!
Subscribe to our Newsletter
HOME » Blog » Spring Elegance, Tokyo and beyond – It’s great Part 2

Earlier on in April, we had a great blog diary from one of our customers travelling in Japan on the Spring Elegance tour. Tina Vivona and her family from Illinois were in  Japan whilst governments still advised against travelling to Tokyo but continued to enjoy the spring weather, cherry blossom and the fantastic culture of this amazing country. Tina  gave us a fantastic insight into the trip as far as Kanazawa and her love for the country so far had shone through in the blog piece. Tina now gives us the final installment of life on the Spring Elegance tour (April 2011);

Wednesday, April 6, 2011
Lazy morning as our train to Kyoto isn’t scheduled (from Kanazawa) until around noon. Took a short walk to the Oyama Shrine. What a peaceful and relaxing place. Amazing how you can feel such seclusion just one block from a major thoroughfare. It’s so unexpected. Beautiful gardens. Fabulous pond with multiple stepping stones and platforms. Is it really possible for each garden to be more beautiful than the one before?

Quick stop at the arcade for some more takio drumming. Off to the train station. Two hours later we are in Kyoto. Taxi to the hotel. Check in and meet back in the lobby within 15 minutes so we can begin our evening tour of the Gion district. Gion is the famous entertainment and geisha quarter on the eastern bank of the Kamo-gawa.

First event for the evening was the Miyako Odori geisha performance at the Gion Kōbu Kaburen-jō Theatre. Beautiful to watch! Spectacular color. Another traditional Japanese
dinner followed ala bento box style. Special walking tour of the Gion district with a local guide in Kyoto. Fascinating history. Passed a maiko in the street. Saw Maiko and Geiko performing in the upper windows of a teahouse. 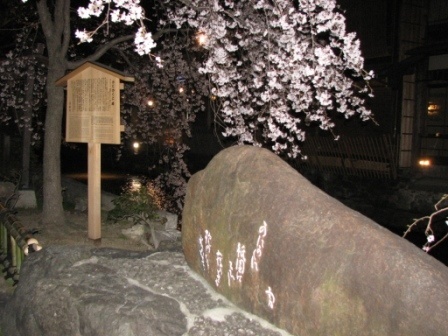 Cherry blossoms lining the street were lit and provided a glowing canopy. Truly enchanting. Ended the evening with drinks at an Irish Pub. It was open mike night. Entertained by belly dancers, a guitar player, a harmonica player, singers, and best of all, a Michael Jackson impersonator. Funny to see Western culture appreciated by the Japanese.

Thursday, April 7, 2011
Woke up super excited. Geisha makeover today. It was fun to watch myself be transformed. I almost didn’t even recognize myself. I got to choose the kimono I wanted to wear. I am so happy with my pictures. I know it’s such a touristy thing to do, but I am so glad I did. 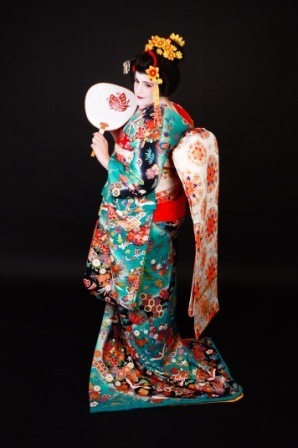 While I was getting made up and photographed, Ross and my parents were exploring the Kyoto train station as it is an architectural marvel. I rejoined them at the Sanjusangendo Temple which house 1001 statues of the Buddhist deity, Kannon. Awesome sight to behold! Beautiful gardens with cherry blossoms blowing in the wind like snow. 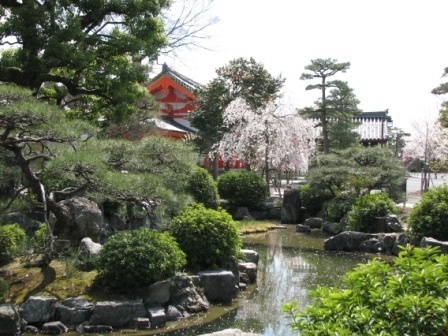 Back to the train station for a lunch of curry. Japanese curry is not the same as it is in America. Did not disappoint. Off to see Kinkakuji Temple or the Golden Pavilion. Golden indeed as the top two floors are completely covered in gold leaf. Magnificient. Love the way it reflects in the surrounding pond. Parted ways with my parents. They opted for some shopping while
Ross and I opted for more gardens. First, we took a moment to enjoy a snack and hanami (flower viewing), the Japanese traditional custom of enjoying the beauty of flowers, at Hirano Shrine. Then it was off to enjoy something new.Zen “rock” gardens.

Our first stop was at Ryoanji Temple, site of Japan’s most famous rock garden. Easy to see how these 15 rocks could inspire philosophical meditation. Next was a visit to Ninnaji Temple, a former imperial residence, where the gardens were great expanses of raked gravel. The grounds here featured many buildings to include a pagoda and bell tower. Simply beautiful.

Friday, April 8, 2011
Received a frantic phone call from Ross’ mom this morning. Apparently there was a 7.1 magnitude aftershock near the epicenter. We felt nothing in Kyoto and assured her we were fine. On our own today. No guide. Rode the Shinkansen, aka the bullet train, to Hiroshima from Kyoto. Practically had the train car to ourselves. 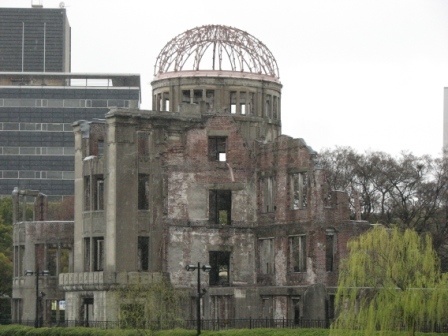 The Hiroshima Peace Memorial Museum and the Atomic Bomb Dome. While walking between the two sites, an older Japanese lady stopped us in the street. She asked where we were from and seemed surprised that we did not seem afraid of the radiation. She mentioned it was nice for us to visit because most tourists had disappeared. She thanked us for visiting Japan and wished us a nice trip. It was a very nice moment. Again, I am glad we didn’t cancel the trip. Lunch featured Hiroshima style Okonomiyaki. Better than what we had in Tokyo. I highly recommend it and will most definitely try to recreate it at home. Headed for Miyajima Island by way of train and ferry. Enthralled by the giant red torii gate even though it was low tide. Able to walk out to the gate. Unexpectantly delighted by the wild deer meandering through town. Dazzled by the expansive Itsukushima Shrine.  Bullet train back to Kyoto. Back at hotel by 10:30 pm – Long, but memorable, day. 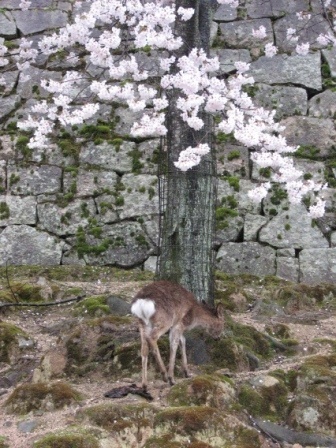 Saturday, April 9, 2011
Another long travel day. Left Kyoto for Hakone by bullet train. In Hakone, we switched to the mountain railway for the long chug up the mountain to our hotel. Lots of switchbacks. Finally reached our destination, the historic Fujiya Hotel, at about 2:00pm. Exhausted by travel and inhibited by the rain, we decided to spend the afternoon at the hotel. Enjoyed a late lunch in the Orchid lounge sitting at the same table John Lennon and Yoko Ono shared while visiting in the summer of 1978. Explored the hotel checking out their hot spring
swimming pool, hotel museum, and shops. Nap before dinner. Tempura for dinner at a restaurant just around the corner and uphill from the hotel. A family run operation. Sat around an arched bar which allowed us to watch the tempura being made. Tried some interesting stuff. Unique experience.

Sunday, April 10, 2011
Enjoyed a formal breakfast in the dining room. No rain today, but lots of fog. Took the mountain rail to the Hakone Open Air Museum. What an amazing museum. Perfectly designed to move you through the gardens at a leisurely pace while viewing impressive sculptures. Popular place. Lots of families with small children. Took time to enjoy the hot spring foot
bath. Rejuvenating. Continued up the mountain by rail then switched to a cable car for the steep incline to the Hakone Ropeway Station. Boarded the arial trams that would carry us to Owakudani, known as the “Valley of Hell” in ancient times. In complete awe as we crossed the summit and descended into the volcanic valley filled with active sulphur vents and hot springs. Snacked on wasabi ice cream and Kuro-tamago, eggs hard-boiled in the hot springs. 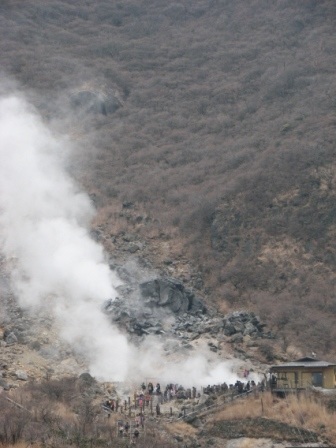 We could not see Mt. Fuji due to the low visibility. Made our way back to the bottom of the mountain to do some shopping. Dinner tonight was Italian – What?! I guess my parents did deserve the break from Japanese cuisine. They had been good sports all this time.

Monday, April 11, 2011
Weather finally improved. Able to walk the gardens of the hotel. Breathtaking as always. Love the carp. 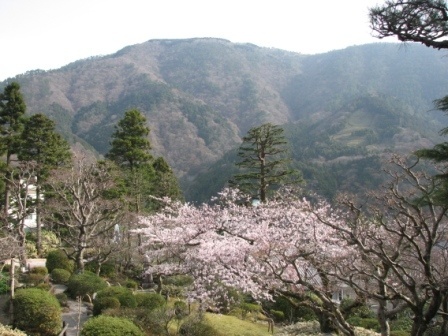 Journey back to Tokyo by mountain train, regular train, and then bullet train. Arrived at our home for the evening.Shinjuku, known as the skyscraper district. Lunch at a ramen noodle shop. Time for some more slurping! Meal purchased from a ticket machine. The Group split up. Mom and dad did some shopping near the train station in Shinjuku. Ross and I headed to Shibuya for some shopping. Stood in amazement and watched the crowds cross the street at Hachiko Square – one of the busiest pedestrian crossings in the world. If you have seen a movie based in Japan, you have probably seen this crossing. I thought Ginza was big. Well, so is Shibuya! 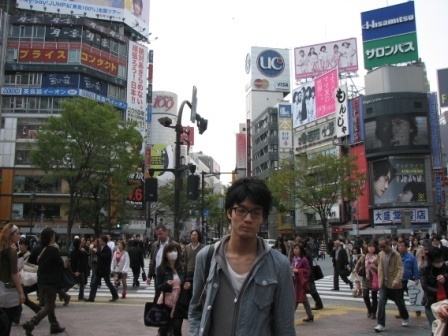 Had a nap at the hotel. Awakened by a 7.1 magnitude earthquake (later lowered to 6.6). Got out of bed to look out the window. Peeked into office building. Workers going on with their business like nothing happened. Went back to bed. Met up with group for our final dinner. Yakitori was on the menu this evening. Grilled meat on skewers. Joint was literally just a bar. Amazing how many people we crammed into this place. Fellow diner got us to try Shochu, his beverage of choice. Not bad at all. Said our goodbyes to our tour guide, Axel.

Tuesday, April 12, 2011
Today marks the official end of our guided tour with InsideJapan. Enjoyed one last breakfast with my parents. They finished packing and headed for the airport. Ross and me are staying an additional five days. More time to explore Tokyo and hopefully go to Tokyo Disneyland. As of today, rumor is that the park will open on Friday. Fingers crossed!
Sayonara! It’s been great! 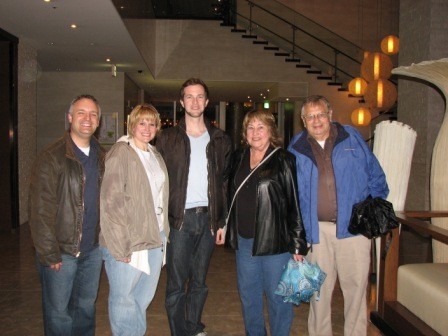 It sounds as though they had a fantastic time in Japan and to be honest we are not surprised. Good to hear that Japan is carrying on as normal in areas many miles from the Tohoku region and that the Japanese welcome is bigger than ever.  Thanks for sharing your experiences with us Tina!