Skip to content
Thank you for signing up!
Subscribe to our Newsletter
HOME » Blog » Best places to see the autumn leaves in Japan by month

Autumn is one of the most popular times to visit Japan, and for good reason. The landscape (70% of it mountainous) bursts into colour with the arrival of koyo (autumn leaves). Vermillion maple trees shroud Kyoto temples, yellow ginkgo trees line Tokyo’s streets, and a warm-hued patchwork reflects in the lakes of national parks. 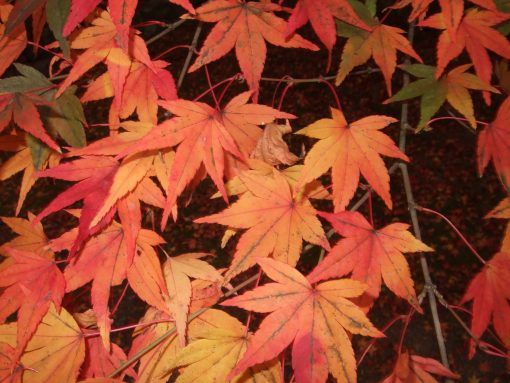 Koyo emerges in Hokkaido in mid-September before sweeping down the country until early December, so plan your travel dates and destinations to see the best of it. 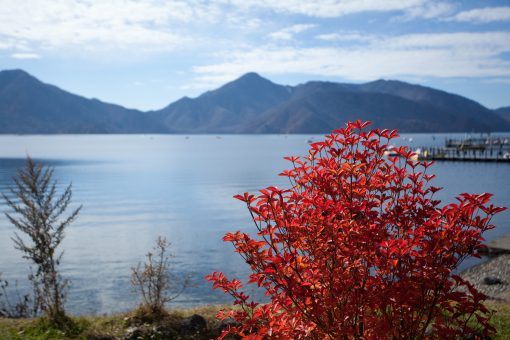 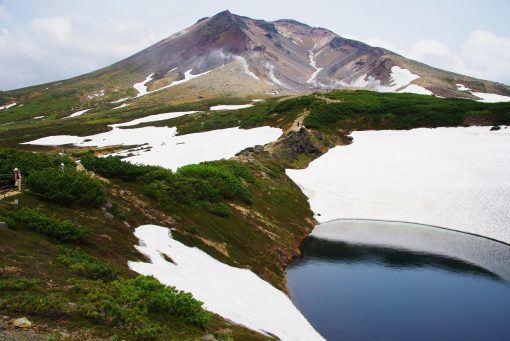 The leaves in Daisetsuzan, the largest national park in Hokkaido, are some of the very first to turn. Take the cable car or hike up Mount Asahi to grasp the scale of the park from above on our Wild Hokkaido self-guided tour. 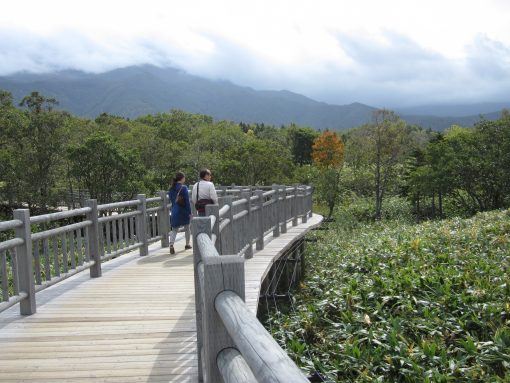 Unspoiled Shiretoko National Park is in one of the lesser-travelled parts of Japan, up in the eastern corner of Hokkaido. In winter visitors flock to the region to see the great plates of drift ice on the lakes. In autumn a wooden walkway that weaves through the trees, and the cruises around the peninsula present the best leaf-peeping spots. Visit the area on the Wild Hokkaido self-guided tour. 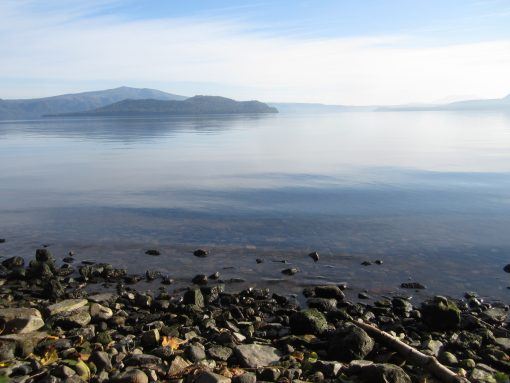 Autumn leaves or not, Akan National Park with its crystal lakes, early morning mists and spectacular drives is worth the trip for nature lovers. Sink into the natural onsen (hot spring bath) overlooking Lake Kussharo for a truly memorable experience. Visit the national park on the Wild Hokkaido self-guided tour.

Far-removed from Japan’s cities, Hachimantai certainly is off the beaten track. Stop for autumn views from the arching Jogakura Ohashi Bridge. 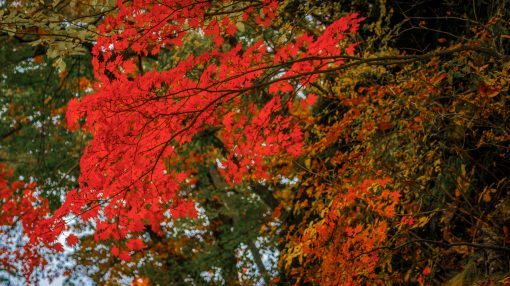 Urabandai is a highland area that is home to more than 100 lakes and ponds. The waters in 5 of the unique volcanic lakes (Goshiki-numa) magically transform and change colour in line with the seasons. 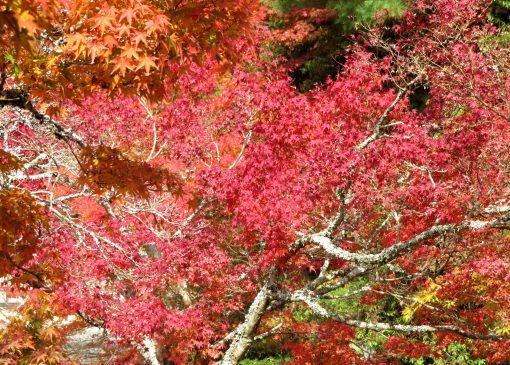 The ferry cruises that loop around Lake Towada have the best views of the colourful peninsulas here. Take the walking trail to follow Oirase Stream as it merges into waterfalls and wends around brightly-coloured trees. 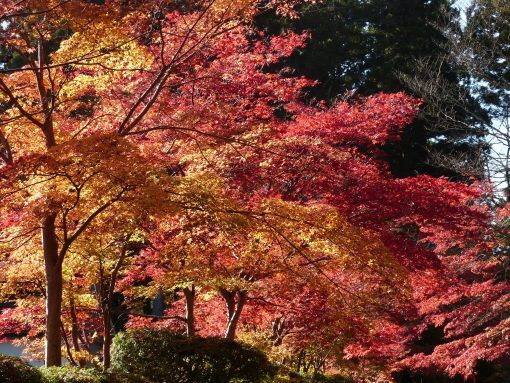 As the leaves turn, this peaceful and secluded temple town glows. Spend a day strolling around the temples and breathing in the mountain air, before filling up on hearty vegetarian fare at Buddhist lodgings. Discover this ancient hideout on our Hidden Japan small group tour. 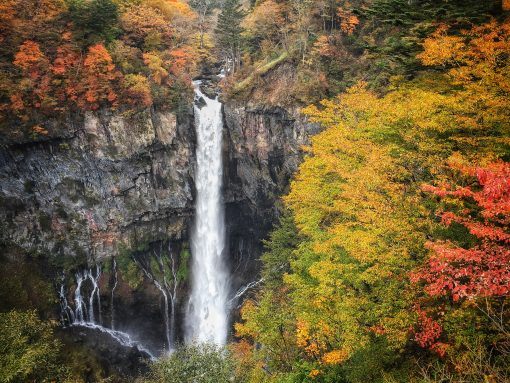 Although only two hours from Tokyo on the shinkansen (bullet train), Nikko’s thick forests and mountain scenery feel like a world away. Walk over the Shinkyo Bridge to explore the shrines (including the elaborate Toshogu), and seek out the national park’s waterfalls on our Autumn Splendour self-guided tour. 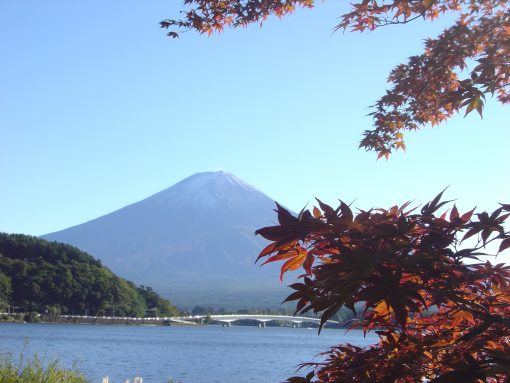 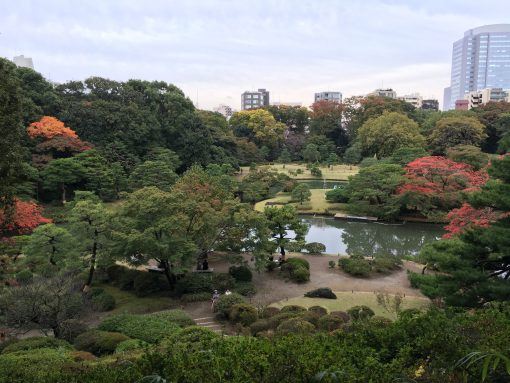 An oasis in the heart of the city. Take time away from Tokyo’s bustle to spend an hour or two in this beautifully tended-to Japanese garden. Cross small bridges over streams, walk beneath towering trees, and take tea overlooking the lake. In autumn, head back to the garden after dark to see the trees illuminated. 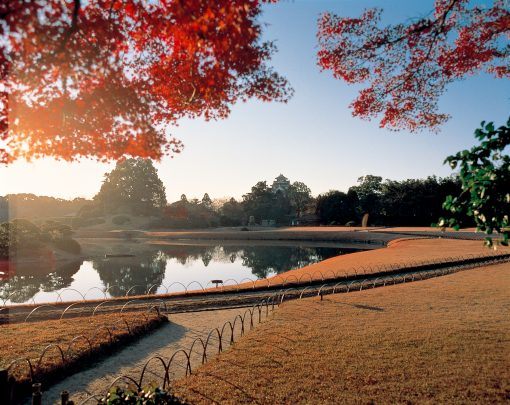 Another of Tokyo’s city gardens. With looming skyscrapers in the distance, it’s an urban oasis worth dipping into for a spot of green (and orange and red) in between sightseeing. Visit Tokyo’s finest autumn spots on our Autumn Splendour self-guided tour. 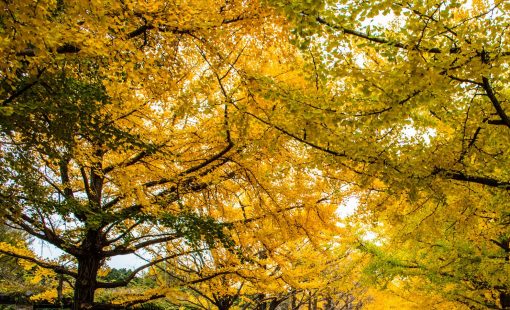 The red maples may be the most celebrated of autumn’s trees, but Tokyo’s vibrant yellow ginkgo trees may rival your affections. The trees that appear to stand in procession on Icho Namiki or ‘Ginkgo Avenue’ in Tokyo draw the most visitors. 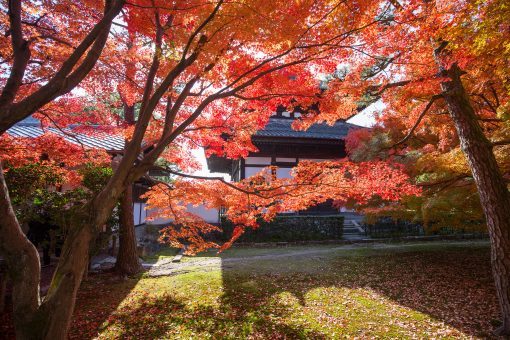 As a striking Zen temple with some of Kyoto’s finest autumn displays, Tofukuji can get quite crowded. Head to Tsutenkyo Bridge early in the morning for the best views. 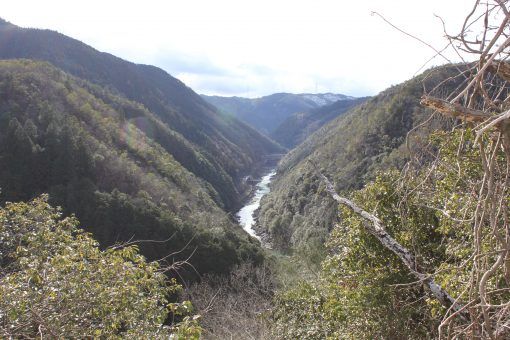 Buddhist temple, Yoshiminedera occupies a spot on Kyoto’s western mountains with views over the city to one side, and undulating mountains to the other; a very special place in autumn. 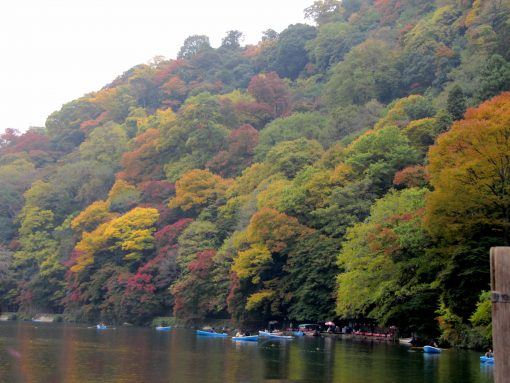 Take a short train out of Kyoto to Arashiyama; an area best known for its striking bamboo grove. A boat trip down the Hozu River is a serene way to see the colourful foliage and local wildlife. Take a day in Arashiyama as part of our Autumn Splendour self-guided tour. 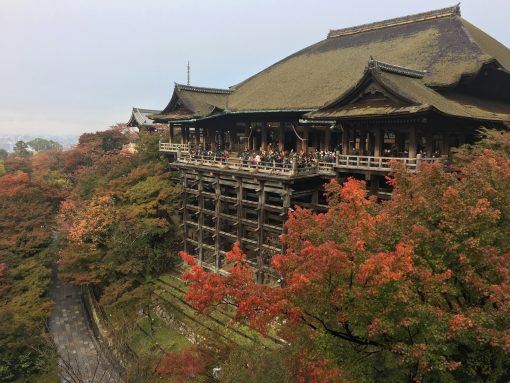 Potter around the shops in the popular Higashiyama District on the way to Kiyomizudera temple. Stand atop the wooden stage here and look out across the cherry and maple trees below on our Autumn Splendour self-guided tour. 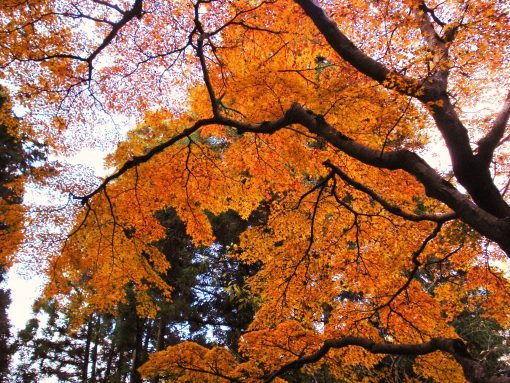 Climb the steps to the top of Tahoto Pagoda for views across a sea of trees below and the city beyond, and walk around the grounds in the evening to see the magical autumn illuminations. Visit Eikando our Autumn Splendour self-guided tour. 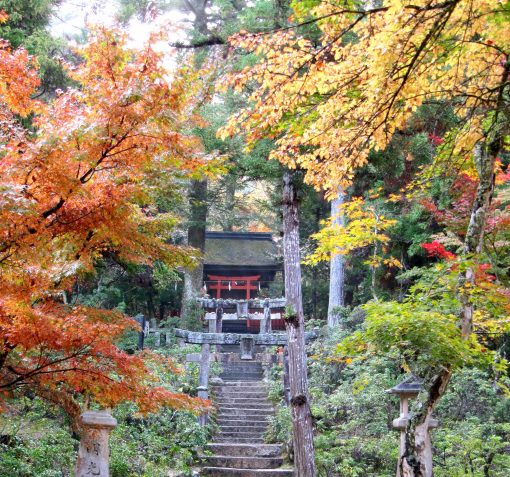 Miyajima is most famous for the extraordinary orange torii gate that stands grandly above the Inland Sea. But if you walk beyond the town, with its bustling cafes and souvenir shops, you’ll find the tucked away Momijidani Park, ‘Maple Valley’. Take some quiet time away from the crowds to stroll between the 200 maple trees (and meet some very friendly deer). 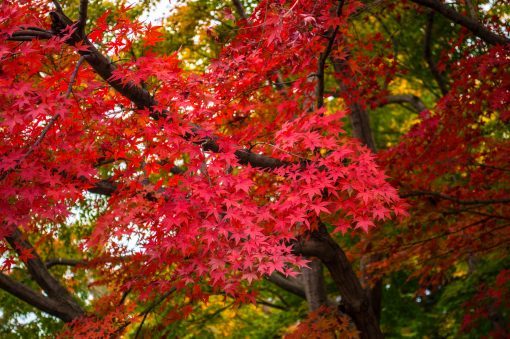 This forested valley is just a short drive or train journey out of Osaka. Take a gentle hike alongside the Minoo River, stopping along the way at small shops and temples, to the Minoo Waterfall for the loveliest autumn views.

Japan’s unspoiled national parks, manicured gardens, vast lakes, and even city parks become just that little bit more special in autumn. Whether you see yourself hiking up in Hokkaido or temple-hopping in Kyoto, get in touch with our travel experts (who have each lived in Japan) to get the most out of an autumn trip. 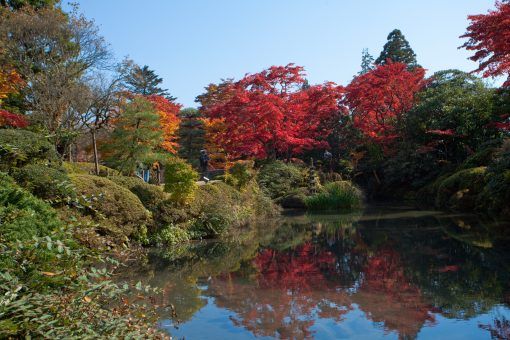