Skip to content
Thank you for signing up!
Subscribe to our Newsletter
HOME » Blog » The Olympics that didn’t happen: Tokyo 1940

Tokyo was gearing up for the Olympics. Planned as a cornerstone of national pride, the Games were designed to showcase Japan to the world and cement its place as a modern, global leader. Posters were designed, travel companies began offering package holidays for the games, and the media had a field day. However, after the outbreak of a regional crisis that spiralled into a prolonged disaster, the games were postponed…and then cancelled outright.

Wait, surely the 2020 games have been pushed back to 2021, and not outright cancelled! We’re talking about the 1940 Tokyo Olympics, though, the Games that never were. 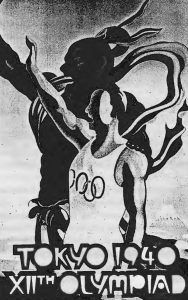 In the 1920s and 30s, Japan was a rising nation trying to make a place for itself on the world stage. European powers still controlled much of Asia through their network of colonies, and when Tokyo made its play for the host city in 1936 their main argument was that to hold the Olympics in Asia (for the first time ever!) would truly make them an international event, and not just a white-dominated sporting event.

However, the Tokyo games quickly began bogging down in difficulties. Several cultural obstacles arose, such as the proposed stadium site in the grounds of the Meiji Shrine being deemed sacrilegious. Just as the 1936 Berlin Olympics had ultimately become a propaganda tool for the Nazi regime, so too did pre-war Japan seek to use the Games for their own ends and promote their own authoritarian regime. When the bloody Second Sino-Japanese war broke out in July 1937, countries such as Britain and the USA began calling for a boycott for the Games. As the war dragged on and became more and more of a strain on the Japanese economy (the military began insisting that Olympic venues be built entirely from wood, as all metals were needed for military manufacturing) the Japanese government itself decided to relinquish the Games. The venue for the 1940 Olympics then became Helsinki, only for the Olympics to be completely cancelled by the outbreak of the Second World War in 1939.

Japan did stage its own 1940 East Asian Games, but with only six competing nations and a much-shortened list of events, they weren’t the global spectacle that the 1940 Olympics would have been. However, Japan did ultimately go on to host the first Asian Olympics, with the phenomenally popular Tokyo 1964 Games. Twenty years after the downfall of Imperial Japan, the 1964 Olympics as Japan’s triumphant re-entry onto the world stage and one of the most exciting games of its era.

Although the 2020 Olympics is postponed until 2021, the Coronavirus pandemic situation is still providing some doubt over the games, we hope that the 2020 Olympics in 2021 will mark a similar resurgence in Japan’s fortunes. One thing we do know is that when the Olympics does happen in Japan, it will be the best yet. Some things are worth the wait.