Skip to content
Thank you for signing up!
Subscribe to our Newsletter
HOME » Blog » Sakoku: 220 years of self isolation

To prevent the spread of Coronavirus, around 20% of the global population are in lockdown with even more social-distancing from others. The last time the world saw an isolation of this scale it was very different in nature: welcome to 17th century Japan, where 30 million people entered the 220 year period known as Sakoku. Not all is as meets the eye though.

Tokugawa Shogun took a firm grip on the country after the long period of Sengoku or ‘Warring States’ – essentially unrest and civil war which lasted from 1467 to 1615. The Shogun believed that Christianity (which had been introduced largely by the Portuguese) and other foreign influences were a threat to the newfound stability of the country.

The policy of seclusion or ‘Sakoku’  (鎖国 lit. Chained/locked country)  was enacted by the Tokugawa Shogun, Iemitsu from 1633 and meant that most Japanese couldn’t leave, and foreigners couldn’t enter Japan (without the approval of the authorities) under  – the threat and the threat of execution.

Still, with various foreign powers offering temptations of Western science, warfare and wonder, Japan wasn’t quite as closed as ‘closed’ would suggest. in 1634, just off the coast of the southern port city of Nagasaki, a 220mx175m island called Dejima (lit. Exit Island) was created for foreign traders.

After the Portuguese had brought in Christianity along with their firearms, favour turned to the Dutch who brought with them, nothing but goods to trade. They had also shown their commitment to the Shogun through the bombarding of Hara Castle to help quell the Shimabara Christian uprising.  Along with the Chinese, the Dutch were the only ships allowed into Dejima and Japan from 1641 onwards.

Whilst on the tiny island and in between ships, the Dutch kept themselves amused. They introduced Japan to the likes of billiards and badminton, beer was brewed and products like cabbage, tomatoes and chocolate appeared for the first time.

Foreigners didn’t always stay on the island either. In true Shogun style, the Dutch were expected to make the annual 1,200-kilometer trek from Dejima to pay their respects at the capital, Edo. They took ‘exotic’ gifts introducing treasures from around the world, as well as the likes of globes, telescopes, medical teachings, spectacles and more, increasing the exposure to foreign goods and ideas.

The audience with the Shogun was an honour and whilst in Edo, the Dutch were housed at the ‘Nagasaki-ya’ building (as documented by Ukiyo-e legend Katsushika Hokusai circa 1802) much to the amusement of the locals.

The end of Sakoku

The eighth Shogun, Tokugawa Yoshimume (1684-1751) took more of a liberal approach to Sakoku in the early 18th century and encouraged ‘Rangaku’ or ‘Dutch learning’ and the wider study of Western medicine, science, military studies, astronomy and more.

The ‘Rangaku’ movement argued that the dissemination of Western ideas and knowledge would strengthen Japan, not weaken it. The movement ultimately led to the removal of the Sakoku policy and the opening–up of Japan.

Sakoku effectively came to a juddering halt as Commodore Perry’s ‘Black Ships’ (kurofune), representing the might of the United States, sailed into Yokohama Bay in 1853 demanding that Japan open trade to the West. This marked a new era and the restoration of the Emperor, the Meji era (1868-1912) and modernisation of Japan.

The Edo period is one of the most exciting periods of Japan’s rich history and possibly one of the most ‘Japanese’ periods in terms of its culture, with its images of samurai and the shogun. However, the Dutch, the Portuguese before them, the Chinese and other nations all had influence over this ‘secluded’ nation. Although not quite as isolated as you might think, the period of seclusion has lent itself positively to Japan and the unique culture that has evolved into what we know and love today.

….and for those of you that want to know a bit more about the history of Japan, take a look at this amusing animated film from Bill Wurtz which gives an overview of the entire history of the country in just 9 minutes.  Click on the link, it’s very funny but be warned that some of the language is a bit racy. 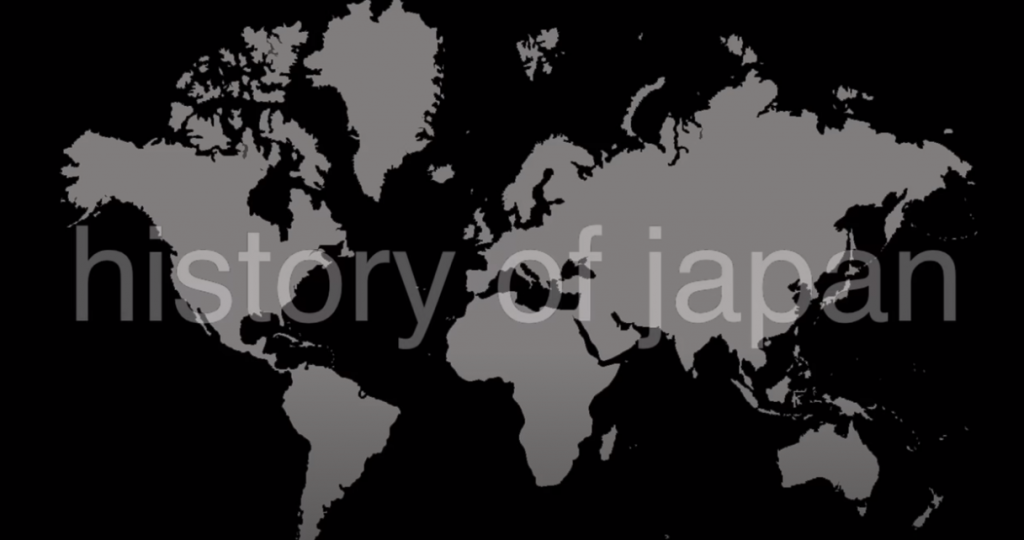