Skip to content
Thank you for signing up!
Subscribe to our Newsletter
HOME » Home » Celebrating Japanese woodblock prints at Bristol Museum & Art Gallery

We couldn’t be prouder to sponsor Masters of Japanese Prints, an extraordinary series of woodblock print exhibitions in our hometown at Bristol Museum and Art Gallery. Senior Curator Kate Newnham takes us on a journey to discover the stories behind the pictures.

The latest exhibition explores each of Japan’s seasons with hanami parties under the cherry blossom, spirited summer festivals, autumn leaf peeping and snowy scenes, with highlights including Hiroshige’s depictions of the harvest moon and Hokusai’s iconic Great Wave off Kanagawa.

Am I right in thinking that Bristol Museum and Art Gallery has 500 Japanese prints, but you can’t display them all the time?

Yes, that’s right. They fade very quickly if they’re exposed to too much light, so we display them at 50 lux. Exhibitions like this will last for about three months maximum, so someone in 100 years will be able to appreciate the prints too.

You’ve got prints from the 17th century right up until the early-mid 20th century, but the obsession with the seasons never seems to get old…

It doesn’t at all! So this part of the series [Nature and seasons] covers the four seasons, along with a section on birds, flowers and insects. 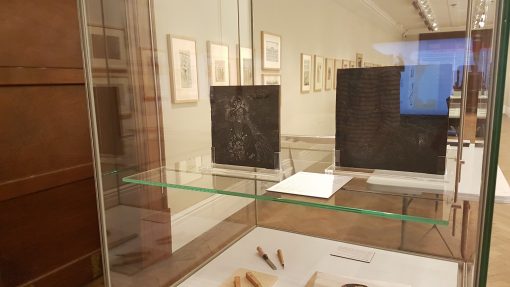 We also have some traditional woodblocks that we’ve been able to borrow from a local collector, Dr Campbell. As you can see, woodblock prints were carved on both sides to save money – wood was quite expensive and each colour requires a different block to be made. There is no printing press involved and they’re still making prints in this way now.

But at the time the prints wouldn’t have set you back very much?

No, they wouldn’t; you could buy one for a double bowl of noodles! But Japanese people didn’t frame the prints and put them on the wall like we do in the West. They would likely keep them in a bundle and look at them from time to time with friends and family, in the same way we do with a photo album. 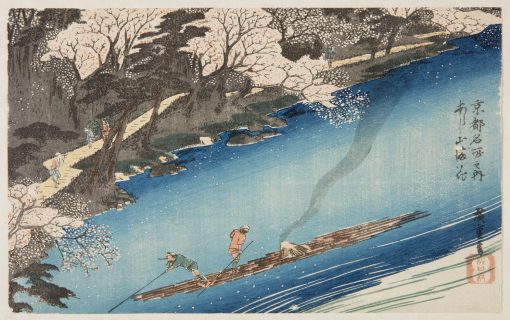 This is a Hiroshige print looking down into the river valley at Arashiyama. On his retirement, an emperor in the 9th century planted a whole load of cherry trees and maple trees in this valley. They’re still there today, so this hillside blooms in the spring, then in autumn lights up with the fiery leaves of the maple trees. If you look closely, you can see there’s a man meant to be poling his boat down the stream, but he’s distracted by the cherry trees.

The little spots of white on the water are the petals falling off. Japanese people loved seeing petals fall on water because it looked like snow – it’s so beautiful yet brief and transient. 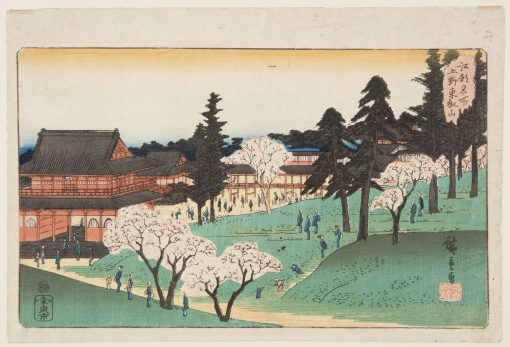 There were temples which were well known for being beautiful in a particular season, whether you go to look at the cherries, the azaleas or the moss.

There was tourism in Tokyo and other major cities as far back as the 18th century and people who had a bit of money would go on a day trip for a picnic to enjoy that brief moment. That’s part of the reason these images became so popular – they were a reminder or souvenir of a moment you may not have been able to take part in. 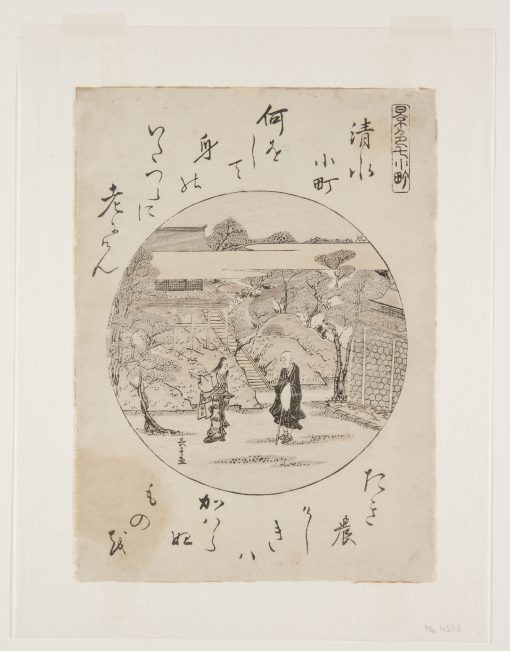 This one is rather poetic, it’s in the style of a Chinese painting and it depicts a poetess – Ono no Komachi – from the 8th century, recognised as one of the 6 or 7 great poets of the period. She was very beautiful, but as she got older she saw her beauty fading – a bit like the beauty of the cherry blossom as the petals fall to the ground.

Often, these seasonal prints include an allusion to a poem. We don’t know those because we’re Westerners, but Japanese people at the time would see stories of Komachi and be able to guess which episode of her life it referred to. There are also special words to invoke the season. For example, the word ‘plover’ would make them think of plovers skimming across the waves at the end of summer. Just the word plover or chrysanthemum or autumn grasses would evoke the season.

There’s so much symbolism in all the pieces

Yes, they’re all packed with symbols, which can drive you a bit mad because sometimes there’s symbols within symbols. I think that’s been part of the fun – to work them all out. 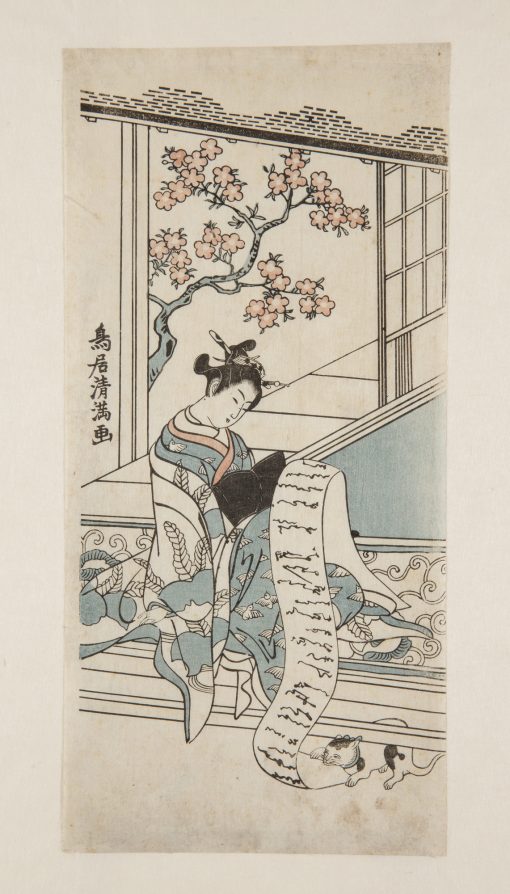 This 18th century print still has quite a lot of its blue, which is really unusual. This lovely lady is in a traditional house sitting on the balcony, the screen is pushed back and there’s the garden with a flowering tree. Her sash is tied at the front which suggests she is a courtesan – a high-class prostitute – and she’s got sparrows on her robe; courtesans were often nicknamed Edo, i.e. Tokyo, sparrows.

Katsushika Hokusai, The Hollow of the Deep-Sea Wave off Kanagawa from the series Thirty-six views of Mount Fuji, 1831 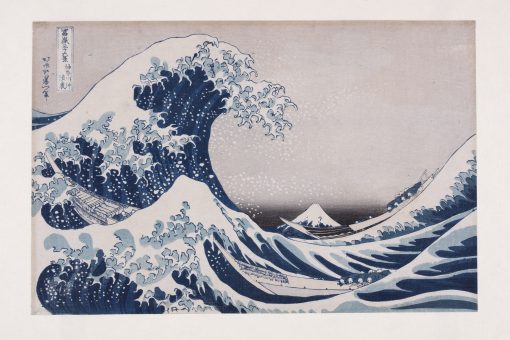 This is such a popular print for us. With the wonderful grasping tentacles in the spume on top of the wave and the wave mirroring Mount Fuji in the background, sometimes people don’t even notice the fishermen in the boats. People often ask ‘is that a tsunami?’ but scholars have concluded it’s not; a tsunami is only where there is an earthquake associated with it. They think this one is a different type of wave called a breaking wave. 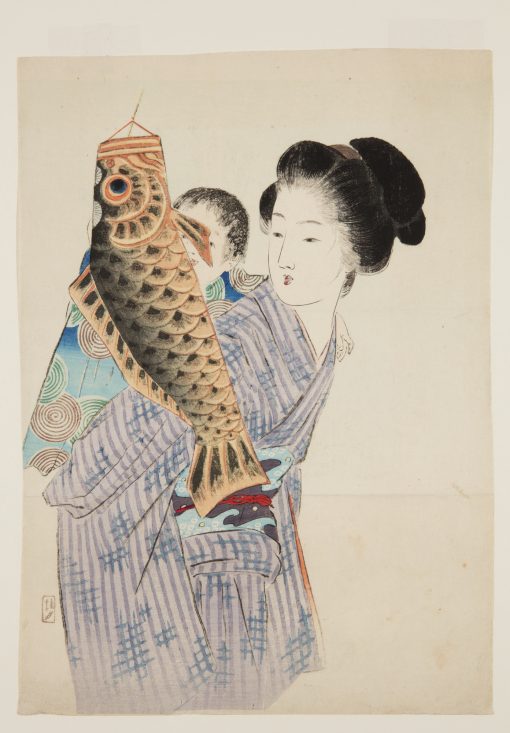 The summer prints are views of hot and sultry days, but they also reference seasonal plants and flowers. These irises refer to an episode in one of the first Japanese novels, The Tale of Genji along with references to seasonal festivals.

We’ve just had ‘Boys Day’ – the 5th day of the 5th month – a festival that celebrates the health of young boys. Because carp are thought to be very strong and agile fish, carp streamers are often displayed during Boys Day celebrations. 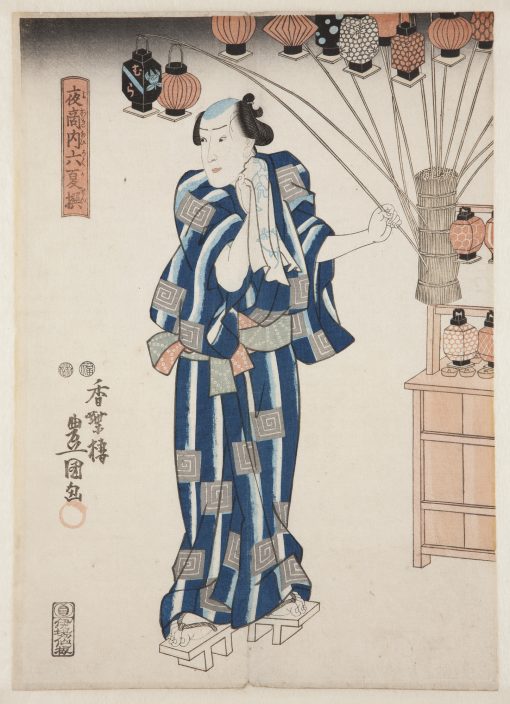 This is a hot and sweaty actor playing the part of a lantern seller. Within kabuki theatre you often get seasonal references – ‘he’s selling lanterns therefore it must be summer’. Everyone has outdoor festivals, and he’s mopping himself because it’s so hot.

Utagawa Kuniyoshi, The Heavenly Weaver and the Herdsman, 1840-42 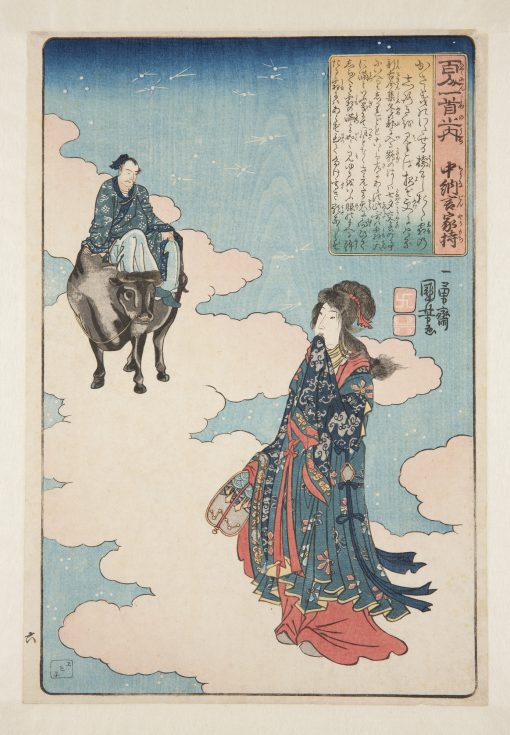 This is another festival; Tanabata – the 7th day, 7th month – also known as the Star Festival, when two lovers were thought to meet for one time per year across the Milky Way. You can see the grain of wood so this is one of the early printings when the block was still fresh and crisp.

Utagawa Hiroshige, Enjoying the cool of evening on the riverbed at Shijo. Kyoto, Meisho 1834 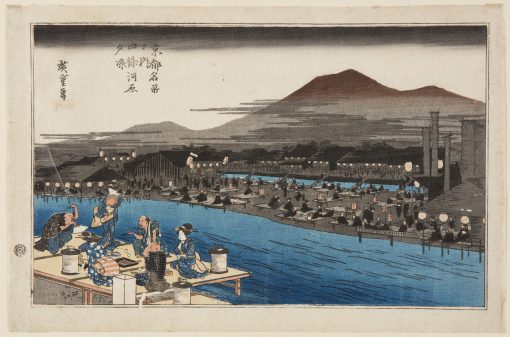 This is Kyoto in summer where, to this day, they build platforms around the river with lots of pop-up restaurants and cafés so you can benefit from the cool of the water and the breeze. I was talking to Kyoto friends who said they have these out all summer for the Gion festival, Obon festival and Tanabata. 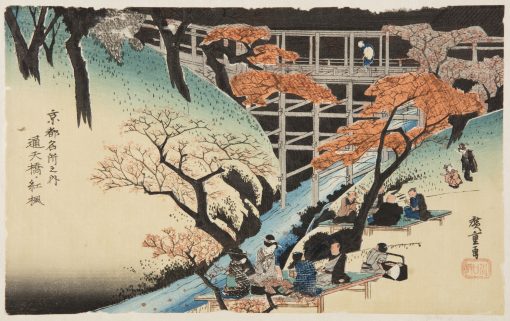 Kyoto is amazing in autumn. We think we’ve got nice trees in England, then you go over there and realise they’re really special. 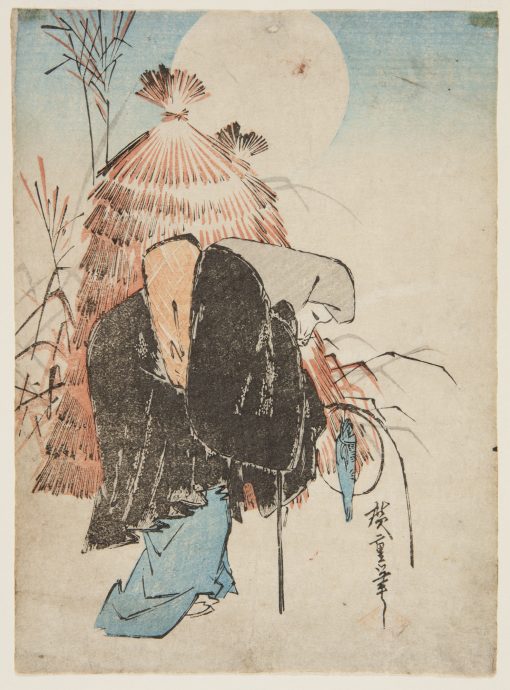 This harvest scene is quite odd. You’ve got what seems to be an old lady, but is actually a fox. Just like the other seasons, there are a whole lot of symbols to do with autumn; you’ve got the autumn moon, harvested rice and pampas grasses.

The fox is a messenger of Inari, the Shinto god of rice and god of the harvest. Foxes were believed to be cunning and shapeshift, so this is an old woman fox apparition.

Utagawa Kuniyoshi, Writing a Label for Chrysanthemums, from the series Women in Benkei-checked Fabrics c.1844 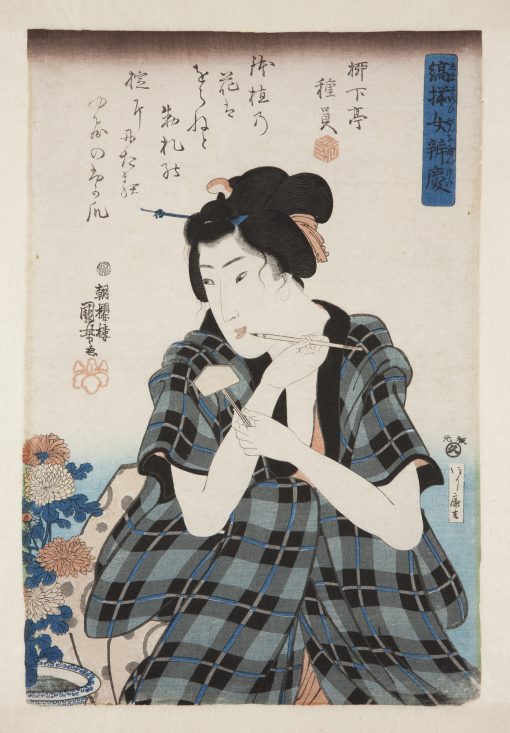 This woman is writing a label for chrysanthemums, an autumn flower and symbol of long life. Educated Japanese people would associate writing the sign and wearing this checked garment with the story of Saitō Musashibō Benkei, and the time Benkei was asked by his samurai master to write a label saying ‘please do not destroy this ancient tree’.

Utagawa Hiroshige, Parody of the Ukifune Chapter: Ferry on the Sumida River, from the series Famous Places in Edo and Murasaki’s Genji (Edo Murasaki meisho Genji), 1845 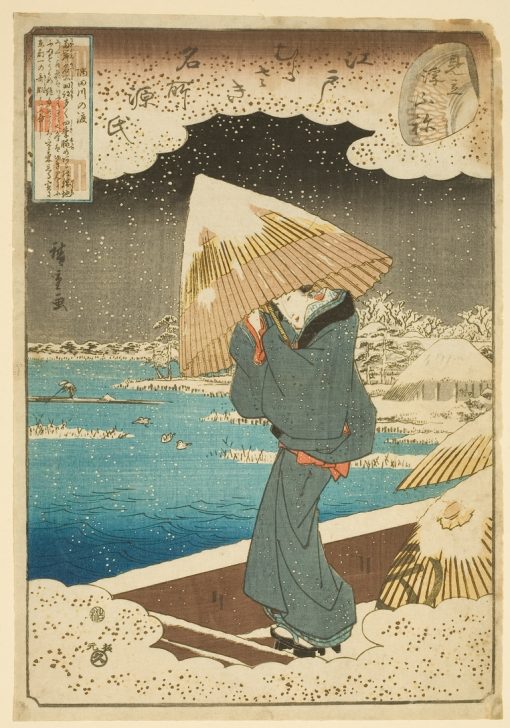 Snow is known in Japan as one of the three beauties of nature – flowers, snow and the moon. But within this one there are allusions to the 11th century novel The Tale of Genji. It’s about the heroine who unfortunately decides to throw herself in the river.

It’s very beautiful for something that’s quite sad.

Yes, but there’s also a commercial element to it – it has the logo of the printer. People rarely notice, but they sneak in company logos into the prints sometimes. 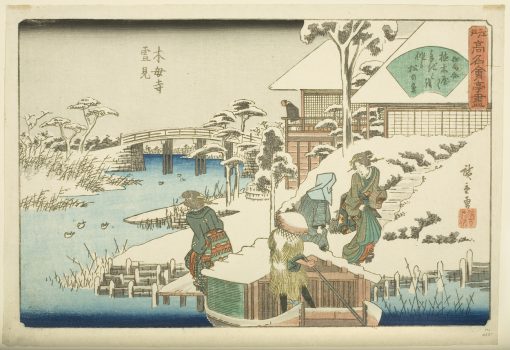 In the same way you get cherry blossom viewing, this one is snow viewing. Scholars think it was commissioned by a group of poets. It’s got a little, satirical poem, so may be referencing a visit that this group of poets had to a temple. Someone wrote a poem, then they commissioned this print to go alongside it. 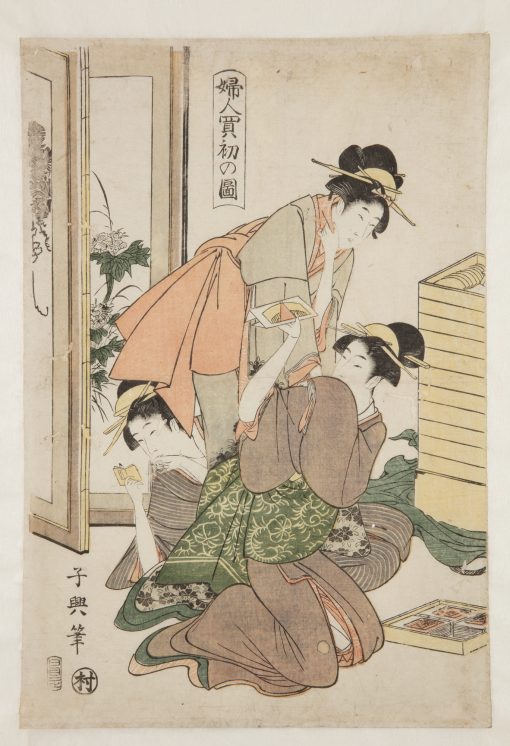 You know we have Boxing Day sales? Well, the whole business of New Year’s sales goes back a good 200 years in Japan as well. It looks to me as though they’re buying combs. 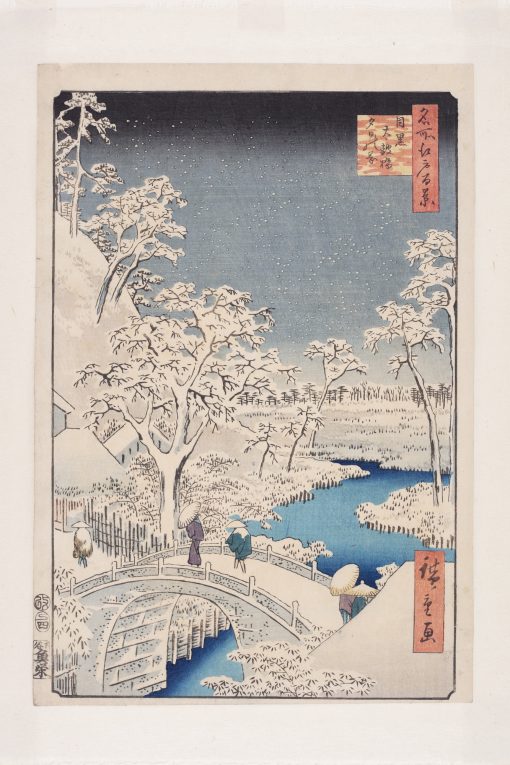 Then this one is a view of Tokyo at a bridge called the Meguro drum bridge. Hiroshige was particularly good at depicting snow, and you get a feeling of stillness and silence in this print.

This is my favourite – you can almost imagine the sound of the crunching as they cross the bridge.

If you find yourself in Bristol, don’t miss the chance to see these prints in person at the final Masters of Japanese Prints exhibition at Bristol Museum & Art Gallery.

Want to discover the inspiration behind the pictures? Check out our Through the Floating World Self-Guided Adventure or join one of our knowledgeable tour leaders on a Japan Small Group Tour.