Skip to content
Thank you for signing up!
Subscribe to our Newsletter
HOME » Home » Walking the Nakasendo Way

We’re all looking forward to watching Joanna Lumley walk the Nakasendo Way this evening, but what should she expect? Travel consultant Kester recently fulfilled his ambition to walk a section of the old feudal highway, so read on to find out how he fared.

Growing up in rural Hampshire, where going to school meant crossing several fields full of cows and the premium form of entertainment available was seeing how many trees you could fall out of in one day, I have always been a fan of the countryside over cities. This is as true in Japan as it is in the UK. During my time working in Japan I was lucky enough to live on both a subtropical island and a snowy mountain, both of which cemented my love for rural Japan.

On my recent trip to the country, I decided to do something I had been meaning to do for some time: walk part of the Nakasendo Way, the old postal road between Kyoto and Edo (now Tokyo). On the old highway I would be walking between two villages, Magome and Tsumago, both of which have been lovingly restored by their residents to reflect how they would have been hundreds of years ago. Cars are banned in the daytime, power lines are hidden and buildings are in the traditional wooden style. The waterwheels that once powered mills with the mountain streams now generate electricity for the villages.

From Kyoto, I used my Japan Rail Pass to catch the bullet train to Nagoya, where I changed to the express bound for Matsumoto. Alighting at Nakatsugawa, deep in rural Nagano Prefecture, it was then a short bus ride to Magome, from where I would begin my walk.

Stepping out on to the main street of Magome, the efforts of the villagers are immediately apparent. It feels like stepping back in time. The streets are twisting and cobbled, lined with mountain streams. The village has many shops and a fair number of visitors come for the day to enjoy the old-fashioned feeling. Numbers dwindled as I began climbing the hill in earnest, thinning out until I left the village and started on the Nakasendo Way proper.

It is just eight kilometres from Magome to Tsumago, and the path begins with a steady climb to the mountain pass at 800 metres above sea level. Initially the path wends its way through light woods mixed with rice paddies, occasionally crossing the road also bound for the pass. After around 30 minutes, however, the path heads out on a different trajectory from the road and the woods become deeper and older.

One thing that can take many by surprise is the bells attached to wooden posts at regular intervals along the path. On closer inspection, these are to warn away the bears that still inhabit central Japan! Travellers on the road used to carry hand bells with them in the deeper stretches of wood, but in recent years bears have retreated deeper into the mountains and the bells are now more for tradition that anything. They still have these rather daunting signs though!

Past the summit of the pass, the long downhill to Tsumago village begins. In this area is a teahouse run by a lovely old man providing walkers with tea and snacks after the climb. In the interest of future travellers (by no account for my own reassurance you understand), I asked more about the bear bells. The man confirmed what I had heard – that bears had not been seen around the path for several years now, and the bells were more for tradition than anything else. Phew.

The teahouse itself used to be an inspection post belonging to the Shogun’s government, checking the identities of travellers and making sure traders were not transporting prohibited goods. It reminds you that this lovely mountain path used to be a major thoroughfare!

After a well-deserved sit-down at the teahouse, the path continues to descend into deeper, darker and more ancient woodland. The trail hugs the side of steep gullies with crystal-clear streams, becoming a series of wooden walkways over sections of deeper river. Down here the moss grows thick and you can feel the age of the forest, and can really imagine yourself back in the Edo Period, making the long trek between the old and new capitals. It’s like wandering into a fairytale.

Slightly beyond this, I encountered twin waterfalls, called the “Male” and “Female” falls. These waterfalls featured in the famous fictional story of the life of master swordsman Miyamoto Musashi. In order to cool the tension between the samurai and his lady travelling companion, they stood under their respective waterfalls until refreshed. I certainly enjoyed the falls to cool the heat at any rate. It was here that I met an old man doing karate practice between the falls, and along with the old man of the teahouse these were the only two souls I saw on the entire walk. 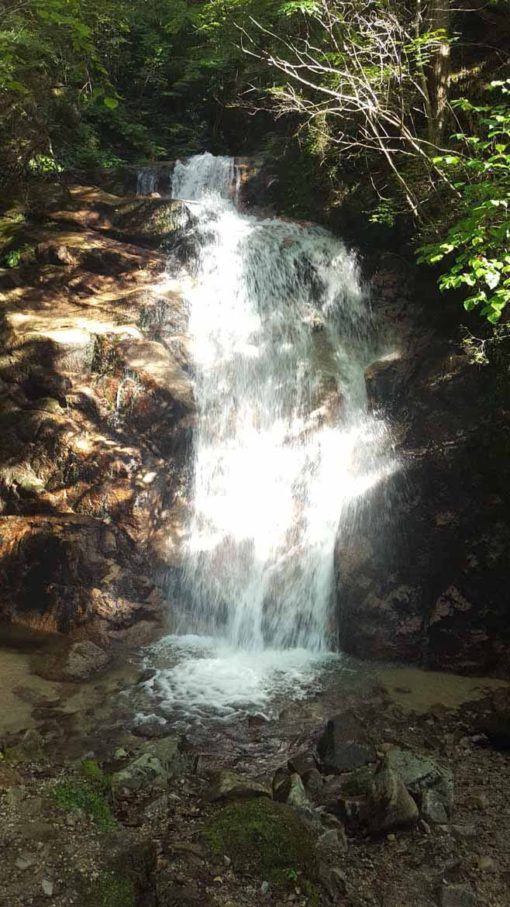 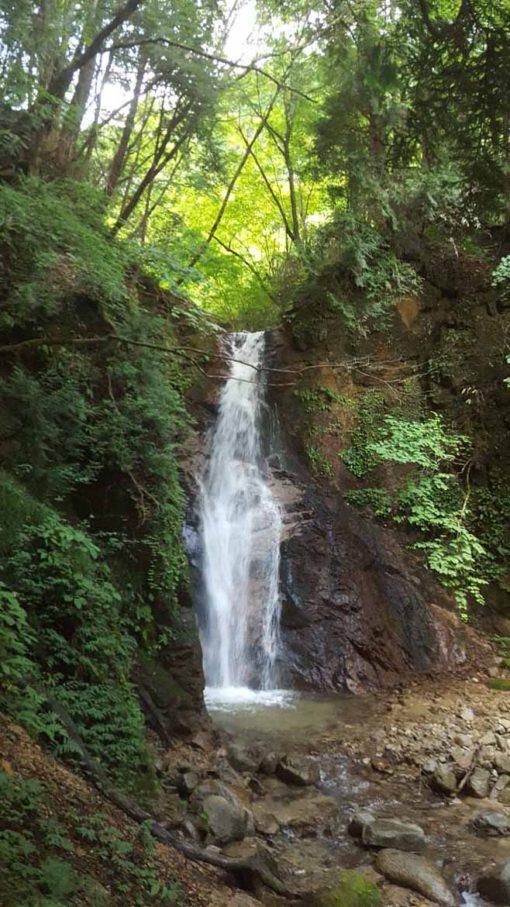 Beyond the falls the path finally emerges from the forest as you make the final approach to Tsumago village. Trees turn to rice paddies once again and houses reappear in the landscape. Tsumago is smaller than Magome, and even more like stepping back in time.

After three hours of walking, I finally arrived at my accommodation, the traditional inn Daikichi, where I had a well-deserved shower, Japanese banquet dinner, and a cold beer – before heading out to enjoy the village’s traditional drummers’ open practice.

Playing in a wooden hall in the centre of the village, doors open for all to enjoy, the group played taiko drums, shamisen guitar and Japanese flute. The music combined with the deep quiet of the countryside, arriving on foot through the forest, the only light outside coming from the moon and the soft lanterns outside each building, was a magical experience. Afterwards I retreated to my inn for a sleep on my futon.

The next day I got up early and took a bus and train back to Nagoya and civilisation, knowing that I would be back again one day. The Nakasendo Way is a truly different experience of Japan to that which you can get in the cities, showing an older, quieter Japan full of natural beauty. I can’t recommend it enough.

Kester is a travel consultant in our Bristol office, and has spent two years living in Japan. If you’re interested in discovering a side of Japan away from the bright neon lights, Kester can help plan the perfect countryside itinerary – including a visit to the Nakasendo Way. To contact Kester directly click here, or follow this link to get in touch with one of our offices in the US, UK or Australia and begin planning your trip!