Skip to content
Thank you for signing up!
Subscribe to our Newsletter
HOME » Blog » How not to visit Mount Koya: A step-by-step guide

My visit to Mount Koya was a catalogue of errors. I present them to you here so that you might learn from my mistakes, and never attempt the same.

My first error was not booking accommodation in advance (this is an error that I committed frequently during my time in Japan, and from which I never learned. There are not enough hotels in Japan!) By the time I got my act together and began looking online for a room about a week before my trip, there was nothing left at all.

This is not a problem! I thought to myself. I shall simply make a day trip of it. This was error number two. 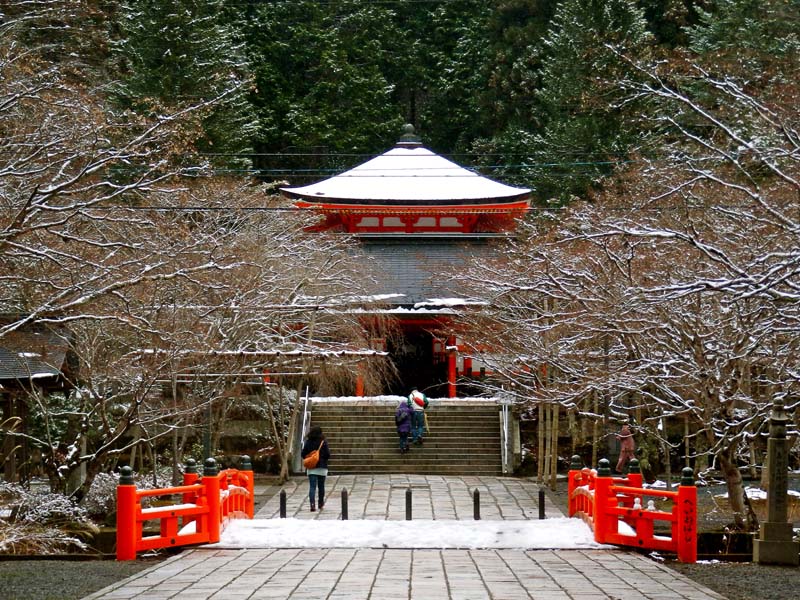 Having taken an early bus for the three-hour journey from Nagoya to Osaka, arriving on time and according to plan, I boarded the first of the several achingly slow trains I would need to take to reach Mount Koya. At Hashimoto Station I had to change trains, so I asked a friendly old man which one I should catch. Aren’t the Japanese people so lovely and helpful! I thought to myself, as I boarded said train. It was only when I had been deposited in the middle of ass-bloody-nowhere, having stopped at every one-horse town along the way and watched as several direct trains to Koya thundered past me, that I realised I had made error number three.

After waiting in this deserted station for about an hour, I finally boarded a train that would take me (albeit slowly, ever so painfully slowly) to Mount Koya. At the end of the line, I hopped on the funicular that would take me to the very top of the mountain. Success at last! I had arrived, and only several hours later than expected. 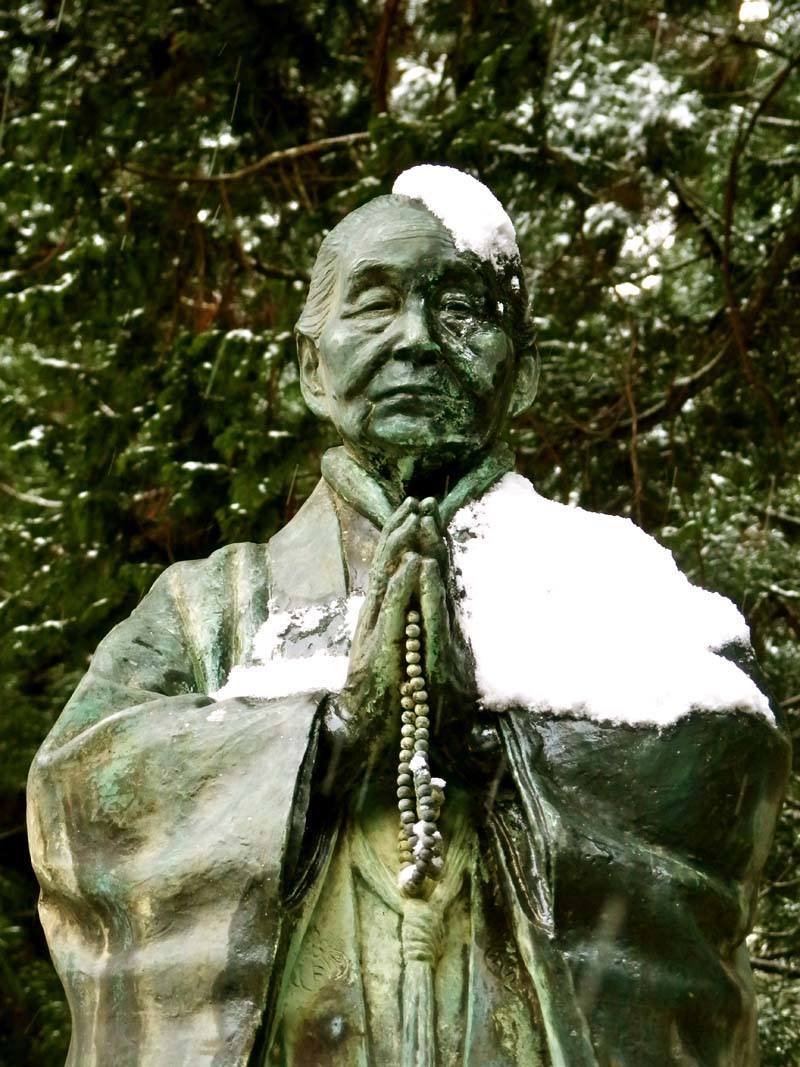 At this point I could mention another misconception under which I had been labouring, which was that when it is warm, sunny and spring-like in Osaka (which at this time it was), the same would be true in Mount Koya. Alas, this was not so. As I stepped out of my final station I was greeted by a full-blown snowstorm. As it turns out, the weather can be quite different when you go from sea level to 800 metres – go figure.

I am hesitant to call this error number four, since in the end it didn’t diminish my enjoyment of Koya at all – in fact it rather added to the atmosphere – so let’s just call this a surprise, which indeed it was.

Now I was faced with a couple of hours until dark and the prospect of an equally arduous train journey home, and I had only just arrived at my destination. D’oh. When would I have time to hunt for the mummified “mermaid” rumoured to be housed at one of the nearby temples?! And when would I get a chance to search for the insect memorial, erected in Okunoin graveyard by an extermination company? I wouldn’t, is the answer. Instead, I would barely have time to race around the area’s famous sites, stopping off ever so briefly at the town’s great red pagoda and racing around Okunoin like a blue-arsed fly.

It is testament to the captivating atmosphere of Mount Koya that despite visiting under the most harried conditions possible, it was still my favourite place in the whole of Japan. Don’t dismiss this as just another collection of temples and pagodas – it is much better than that. There is no good way to describe wandering through the town’s silent and seemingly endless cemetery, surrounded by a thick forest of Japanese cedars with snow whipping through the trees, mostly without another soul in sight. As a seasoned curmudgeon and thoroughly difficult-to-please traveller I do not give this praise lightly, believe me.

Was it worth the effort? Absolutely. Would I recommend Mount Koya as a day trip? Not a chance. So visit Koya, but don’t do as I did. Make sure you have time to wander Okunoin thoroughly, getting up early in the mist or visiting late in the evening by lantern-light. Spend the night at a temple lodging, attend a morning prayer ceremony, and enlist a local guide to teach you all about Kobo Daishi and the region’s fascinating history. I can assure you that it will not disappoint! 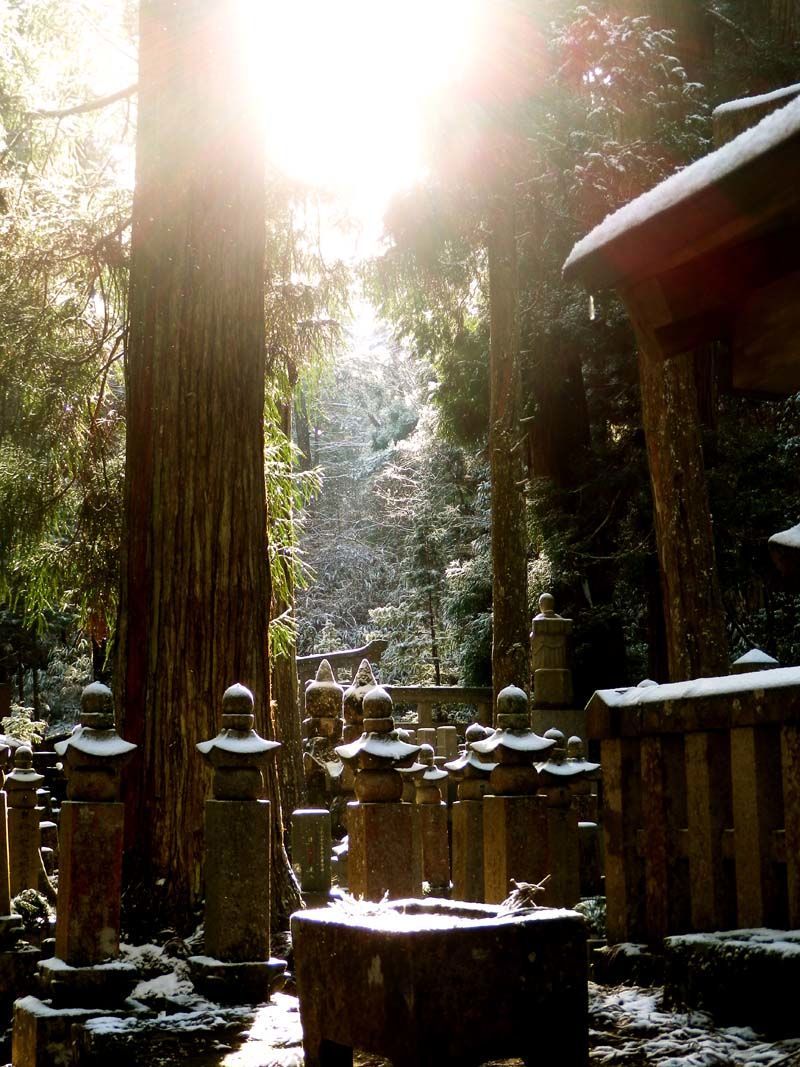 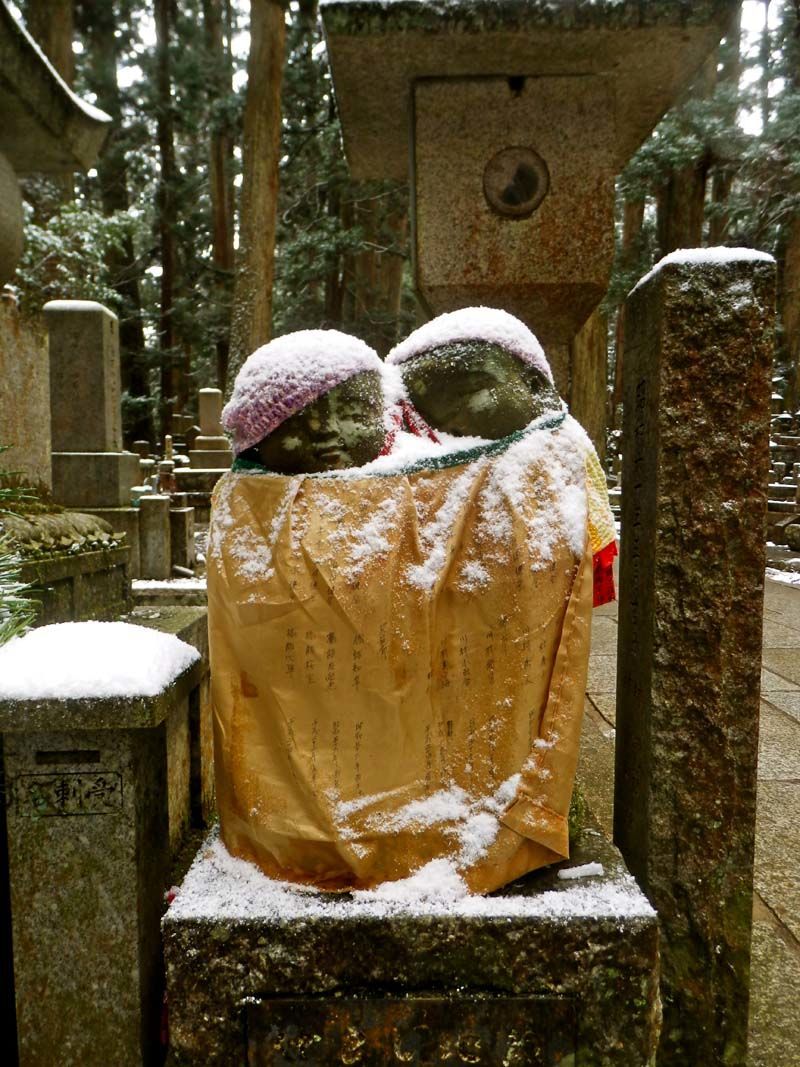 Book a stay in Mount Koya with InsideJapan Tours and you’re guaranteed to avoid my mistakes. Our Pilgrim’s Paths itinerary and our Hidden Japan group tour both include stays in atmospheric Mount Koya.