Kirishima National Park is an active volcanic mountain range that straddles the border between Miyazaki and Kagoshima Prefectures. The region is made up of mountains, highland plateaus, volcanic lakes and hot springs which makes a lovely area for hiking. 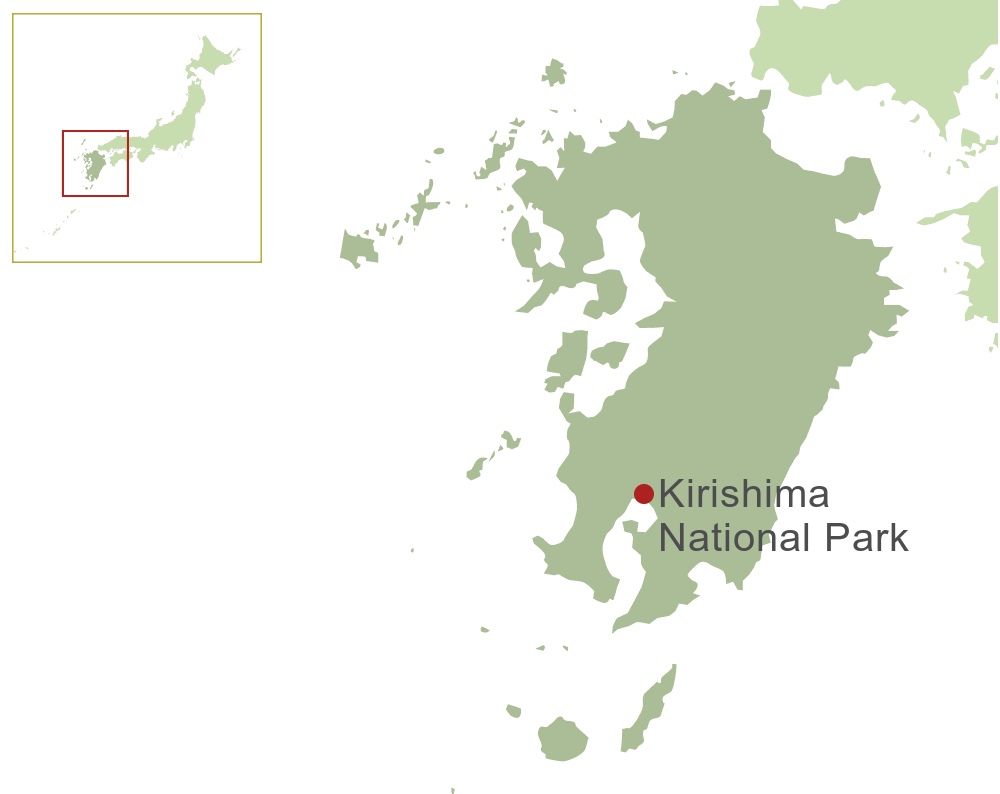 “It's well worth venturing to Kyushu's centre-south to go hiking in Kirishima National Park. You'll be rewarded with a volcanic wilderness scattered with turquoise lakes that are little visited by tourists.”

The mountains of Kirishima play an important role in Japanese mythology. This is believed to be the site where the god Niniji no Mikoto, grandson of the sun goddess Amaterasu, was sent to rule over the earth and establish the lineage of Japanese Emperors. Niniji no Mikoto is said to have thrown his spear (the one that was earlier used to create the islands of Japan) down to earth, landing on Mount Takachiho-no-Mine - the exact spot in Kirishima National Park where he descended from heaven.

On the Miyazaki side of the national park, Ebino Kogen is a small village at a high elevation surrounded by mountains and volcanic lakes. In Kagoshima Prefecture, Kirishima Onsen is a more developed town with several hotels known for their hot spring baths which harness the power of the region's geothermal waters. On a clear day it's possible to see as far as Kagoshima City and the Sakurajima volcano from Kirishima Onsen.

Hiking is best from spring through to the autumn as several trails are inaccessible during winter (November to March). One of the most popular courses is the Kirishima Ride Trail which traverses the length of Kirishima's mountain range and takes around six hours to complete on foot. This trail takes in Kirshima's highest peak, Mount Karakunidake (1,700m). Karakuni is an alternative kanji reading for Korea and the mountain is so named as it's sometimes possible to see the Korean Peninsula from the summit.

Takachiho-no-Mine is another enjoyable hike. 1,574m tall, the mountain sits at the southern hem of the Kirishima mountain range. The steep ascent takes around 90 minutes scrambling up loose volcanic terrain.

The following are our favourites from among the western-style hotels and Japanese-style inns of Kirishima National Park.

The Climate Guide for Kirishima National Park, Japan is perfect for planning your holiday. Monthly weather averages give the best indication of what the weather is usually like for every month of the year including figures for temperature, rainfall and sunshine.