Skip to content
Thank you for signing up!
Subscribe to our Newsletter
HOME » Blog » We visited the ‘WOW’ Exhibition at Japan House – and you should too

It began as a slow, drifting journey through a black void. Little specs of space dust floated past while, in the distance, stars twinkled.

Out of the darkness a twirling 7-Eleven whizzed by, followed by a Lawson and a FamilyMart. A stream of cars swished gently by, then white vans, petrol stations and train platforms. Ahead, great skyscrapers loomed, their lights pulsing and flickering, breaking up and wheeling around like shoals of fish. Without hesitation we dove inside them, careening through messy bedrooms and capsule hotels, zipping along commuter trains, faster and louder with every passing second. Tokyo’s Skytree came yawning from the black as we plunged into the ocean past lighthouses and cruise-ships. Without warning we bounced off into space, skimming planets haloed with motorways, and at once everything burst into glittering colour- reality sparked and fizzed, folding in on itself, drenched in moonbeams and the roar of the universe growing ever louder, aaaaaaAAAAAHHH-

“Would you like a canape?” asked a smiley waitress, suddenly by my side.

Several weeks ago I was lucky enough to represent InsideJapan at the opening of the WOW: City Lights and Woodland Shade exhibit at Japan House, London. If you’re unfamiliar, Japan House is “the new cultural home of Japan in London”, as described by their website. Set up by the Japanese Ministry of Foreign Affairs, Japan House opened in 2018 with the aim of presenting to the world a side of Japan that is often overlooked in favour of flashier attractions: that of craftmanship, skills passed down through generations, and the flavours of life outside of the country’s biggest cities.

Arriving an hour before the official event, I was given a tour by the extremely knowledgeable Hollie Mantle, PR manager for the premises. The ground floor of Japan House is a shop and gallery, packed with glittering necklaces, carved figurines and great earthenware vases large enough to climb in. I fawned all manner of examples of monozukuri, the Japanese concept of devoted craftmanship; woven baskets, washi (Japanese paper), and  curious rubber shoes with separate compartments for each toe. 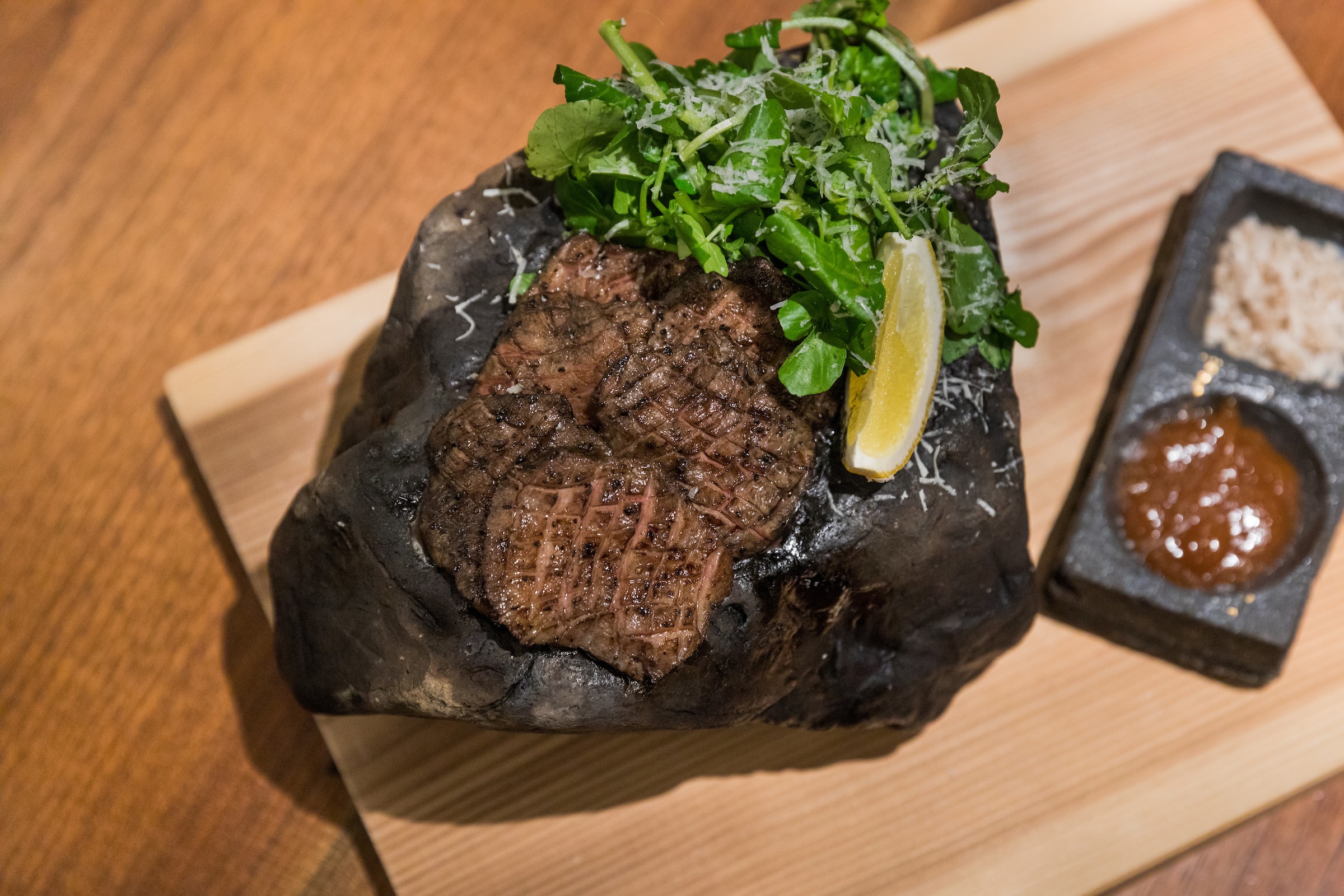 Everything in Japan House has been imported from Japan, from the large black tiles on the floor to the great glass cylindrical lift that occupies the centre of the building. On the first floor we passed through a restaurant, busy preparing the evenings canapes – which I was informed would include gyūtan – ox tongue. It was surprisingly delicious. In one corner of the restaurant was a raised alcove which Hollie informed me was a tokonoma – common in Japanese interior design, created for a single object to be placed therein. Presently there was a bowl with some odd white orbs placed in it. Apparently, the simplicity of objects in the alcove create a focal point for the diners that stimulates conversation. I quite like the idea.

Downstairs there’s a library filled with Japanese books on everything from cooking to cartoons, and – I was absolutely thrilled to bits with this – authentic Japanese toilets, complete with heated seat, warm water, and quaint little ditties for you to hum along to. There was even a blow dry option. I don’t know why I am so invariably amazed by Japan’s semi-sentient lavatories, but I am. Humanity’s greatest invention.

When Hollie finally dragged me away from the toilets, it was time to explore the main event: WOW: City Lights and Woodland Shade. WOW is a visual arts studio based in Tokyo and Sendai. The 2011 earthquake is a key influence on their work, which aims to promote Sendai and the rebuilding effort, while also exploring the ways in which we experience and express the modern world we inhabit. As the name suggests of the exhibit suggests, it was split into two halves, each in a separate room: Tokyo City Lights, and POPPO. We began with the latter.

POPPO, drawing its name from o-taka poppo, carved wooden hawks, is a merry jaunt through the digitally-realised woodland folklore of Japan. There are three installations comprising the exhibition: an interactive display in which you stick magnetic tree segments to a wall, and various Tohoku birds fly onscreen to rest on them; a digital carving game in which you to whittle your own kokeshi, a wooden doll; and the faces of 130 citizens of Yamagata Prefecture digitally projected on to physical kokeshi dolls. I had my picture taken to join their ranks, and due to my apparent inability to take a dignified photo, an innocent kokeshi was tragically besmirched with my own gurning mug.

…And Around the Universe

Tokyo City Lights was almost entirely the opposite: far from twee countryside crafts and childlike playfulness, the second exhibit Hollie brought me to was a large, dark room filled with a low hum – the sort of place you’d imagine Darth Vader would hang out in his downtime. Standing in the centre of the space, a video began in vast panoramic widescreen, wrapping almost 360 degrees around the room. Thus began the mind-warping odyssey that began our tale: a light-speed journey through a deconstructed Tokyo, broken down into core elements and scattered across the stars. Pretty cool. Pretty intense.

Later, I sat and sipped a sake as Hollie explained the artists’ desire to blend the urban future with the timelessness of rural Japan, and of their aim to bring positive change by broadening people’s perceptions. The stories Japan House want to tell, Hollie informed me, are far less about the bigger picture, and more about tiny pockets of diversity and originally to be found across the country’s landscape – leaving stereotypes behind.

I can’t recommend the WOW Exhibition enough. If you’re keen to visit Japan House for yourself, you can find their website with more information here. WOW: City Lights and Woodland Shade will run until the 22nd of March this year. The next exhibition, taking place from April 2020, is ‘Windowology: New Architectural Views from Japan’, which will look at the ways in which windows give us unique perspectives on the world.