Skip to content
Thank you for signing up!
Subscribe to our Newsletter
HOME » Home » The UK’s first sake brewery – Kanpai in Peckham

Three years after supping all of the sake on a mammoth trip around Japan, Lucy and Tom have brought the taste of the East to South London with the UK’s first ever sake brewery.

How it all started 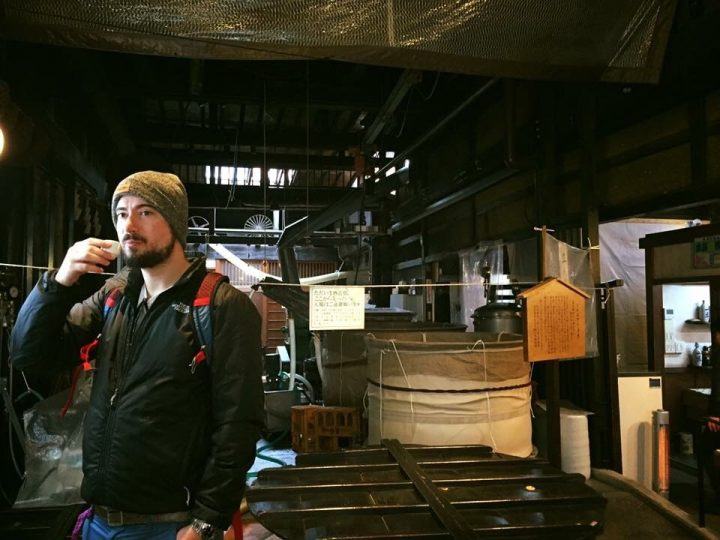 After getting a taste for sake at sushi and ramen restaurants in London we were completely hooked! We began picking up the odd bottle to try at home with non-Japanese food and were struck by the huge range of flavours and its versatility.

Inspired, we went to Japan three years ago to soak up the Japanese culture, try the freshest Japanese food and we were lucky to stumble upon some sake breweries too.

Our first sips of sake in Japan itself were taken on the lively streets of Shibuya in Tokyo (to wash down yakitori sticks) and as we travelled around Japan we fell in love with sake more and more. We tasted it wherever we could; from wonderful traditional breweries such as those in Takayama, to the tiny secret bars tucked away in Osaka’s backstreets. That’s where we learnt to say “Kanpai” to cheers our cups!

Taking the InsideJapan Gastronomic Adventure gave us the freedom to do this alongside other incredible highlights. Staying in a monastery in Mount Koya, and traditional ryokans with endless delicious food were memorable. As were long hot soaks in the relaxing onsen (hot spring bath). Meeting a maiko was a particularly overwhelming experience, we felt so lucky. 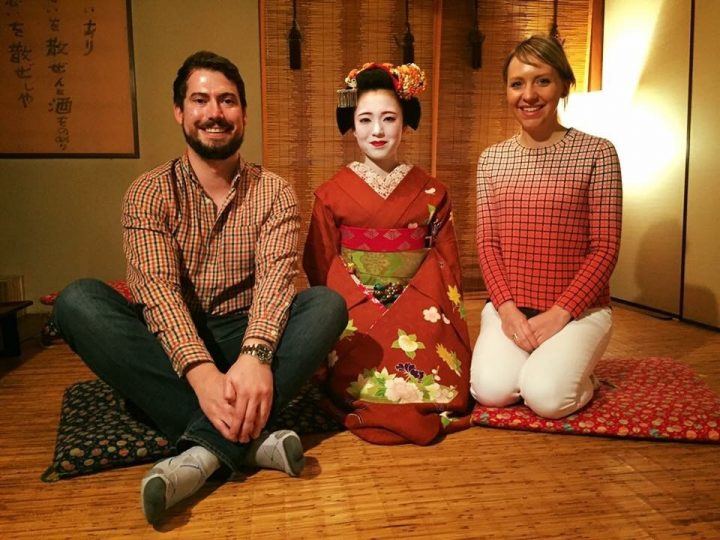 Back in the UK

Back home, inspired by what we had seen and tasted, Tom dusted off his beer-brewing equipment with a certain rice brew in mind. We began making small batches of sake at home, trying to adapt the stages from whatever books, websites and first-hand experiences we could piece together.

Our friends and family enjoyed it so much that we continued. We don’t actually recall making a decision to start a sake brewery – it’s a hobby that got out of control! 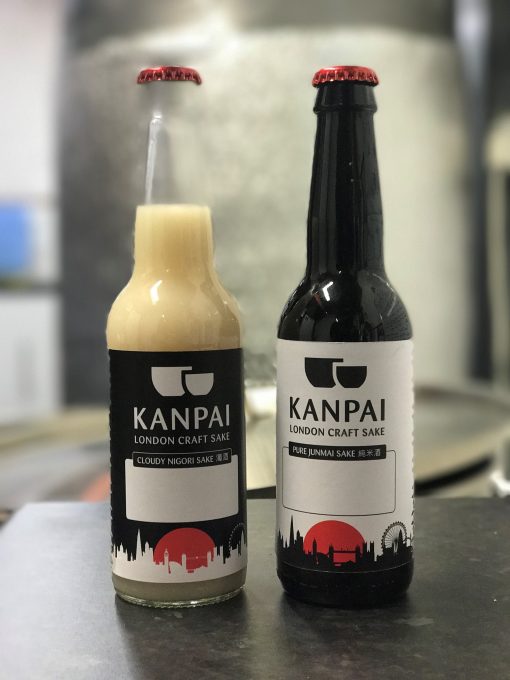 London’s fusion of cultures is incredible, and Peckham is full of creativity and energy. People here love local and seek out new experiences; we were really excited to bring something different to the area. Typically, a bottle of sake costs a pretty penny, which is a barrier for a lot of people trying it. We’re selling it in 330ml bottles, perfect as a sharer carafe, so more people can afford to give it a go.

Local businesses have been really supportive. Brick Brewery has provided stimulating chats (we have plans to brew a sake beer together) and BBQers Slow Richies have made a delicious hot sauce containing our sake. Nearby restaurants and craft beer shops are also taking bottles from our latest batch, and it’s now available in Selfridges! 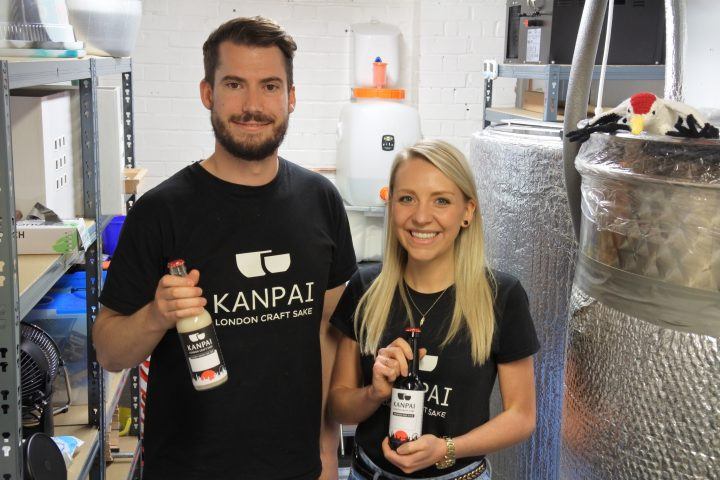 Our sakes tend to be dry and their flavours are punchier than some of our Japanese counterparts. You could call it “London-style” sake.

We make it in the Junmai way with only four ingredients: rice, water, yeast and koji (a magic mould that breaks down the starch in the rice and turns it into sugar which the yeast ferments into alcohol). There are no preservatives or additives and we don’t cut it with distilled spirits.

We want to produce small one-off batches of fresh seasonal varieties, that we can adapt to people’s tastes (with sparkling and fruit versions too). Our dream is to grow into a bigger brewery with a tap room, in the style of a relaxed izakaya, offering sake by the glass. People can then try a selection with lots of different foods; we want them to enjoy the amazing experience we had in Japan, in London.

Recently, Tom won a ‘cooking with sake’ competition, getting the unique opportunity to brew alongside Gekkeikan’s master Toji (brewer) at their craft brewery in Kyoto. This opportunity gave us valuable insight into the meticulous methods involved in brewing competition-grade sakes. Tight controls on temperature ranges are particularly important. Our shiny new kit is glycol-cooled and automatically regulated to maintain specific consistent temperatures. A world away from those first brews in our spare bedroom! 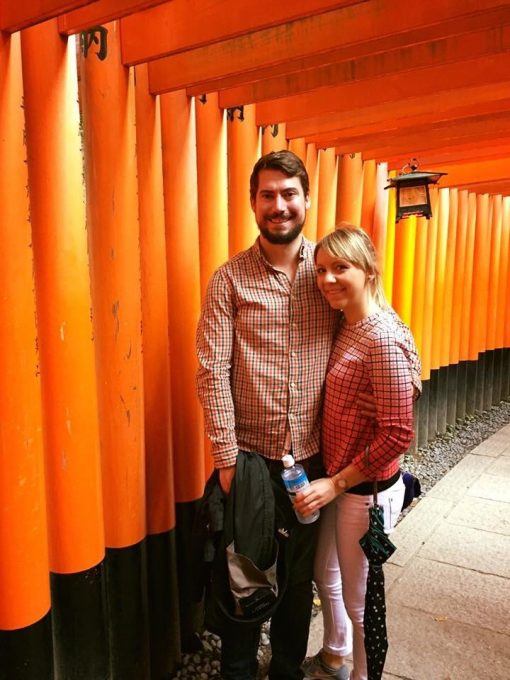 Tom’s recent trip to Kyoto took him to the famous Fushimi sake district. There are approximately 40 sake breweries in Fushimi alone, making it a kind of sake mecca. He rented a bicycle and spent a few days exploring the entire area, and was fortunate enough to visit many breweries… and try a lot of different sakes.

Many have their own shops and some host tastings too. The only difficult decision is deciding which bottles will fit in your suitcase!

Some highlights were, but definitely not limited to, Kizakura, Kinshi Masamune, Gekkeikan, Momo no Shizuku, and Shoutoku (which has a female toji – they make a wonderful kimoto alongside other great sakes).

Lucy and Tom travelled around Japan trying the best food (and drink) Japan has to offer on the Gastronomic Adventure self-guided tour.

If you find yourself in Peckham, pop in for Tom and Lucy’s latest brew. Outside of the capital, sake aficionados and curious first-timers can order craft sake from their website: http://kanpai.london 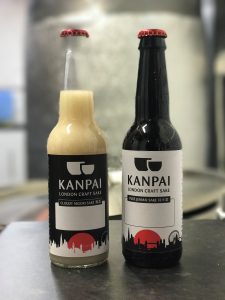