Japan has a reputation for being a land full of obscure customs and unwritten rules, completely incomprehensible to the unwary foreigner. It’s something many would-be travellers worry about, and we’ve written about it numerous times in the past.

As usual – there’s no smoke without fire, and it is true that Japanese culture is a bit of a maze for the uninitiated. It is also true that the Japanese will very rarely tell you when you’re doing something wrong (out of politeness and respect for your feelings, mind you), and that it is a place where things are done doggedly and relentlessly by the book.

BUT – do not let this put you off. No Japanese person will ever expect you to know all the ins and outs of their culture, just as you would not expect someone from a foreign country to understand every vagary of yours. Making mistakes is perfectly acceptable in Japanese etiquette – and it certainly should not be something to lose sleep over when visiting Japan. Moreover, it is the differences between Japanese culture and our own that make visiting this country so fascinating and eye-opening. Without them, it would be a lot less fun.

All this does not, however, give you an excuse not to try. This blog post will introduce you to some of the most common cultural faux pas experienced by foreigners in Japan – giving you more than enough know-how to survive without embarrassing yourself, offending anyone or getting into hot water of any kind (at least not too badly). 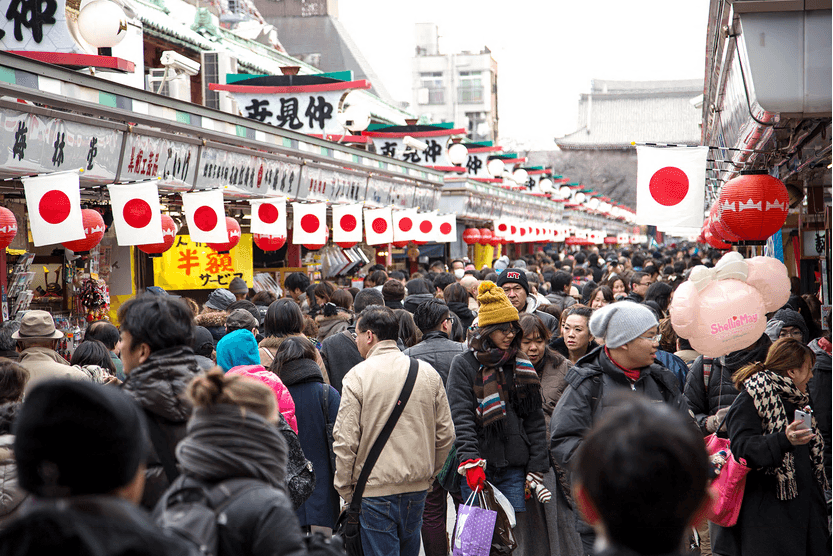 1) TAKE OFF YOUR SHOES

Number one, the Golden Rule, is so important that I decided to put it in capitals. This is the one instance in which the Japanese will ALWAYS let you know you’re doing something wrong, and it can be very embarrassing when you’re caught out. Don’t worry, it’s happened to all of us.

There is a lot of taking off your shoes in Japan, and it has to be done in the right places – not just willy nilly. The general rule is that you should take your shoes off whenever you come to a change of level within a building, and you should never wear footwear on tatami mats. If you are not sure about shoes, just look out for other pairs of shoes lined up and you will get the idea.

These rules apply in hotels, houses, restaurants, temples, museums – everywhere. Sometimes there will be shoe racks, sometimes lockers, and in some tourist attractions you’ll be given a plastic bag in which to carry your shoes around. Just do whatever everyone else is doing (which should be the national motto of Japan, really).

When you have removed your shoes, the fun doesn’t end – at this point you will most often be provided with a pair of slippers to wear instead. Do not deviate from the plan by refusing the slippers. When you go to the loo, you must exchange your slippers for the designated toilet slippers (to be found inside or near the toilet, and often labelled “toilet” in English), before re-donning your original slippers when you emerge. Accidentally forgetting to take off the toilet slippers after leaving the loo is pretty much the most mortifying thing you can do in Japan.

If it all sounds complicated and slightly needless, that’s because it is – but it’s the rules. Learn them and you’ll save yourself considerable embarrassment.

2) Know how to onsen

Bathing in a hot spring, or onsen, is one of our favourite Japanese pastimes – and it has such an extensive etiquette associated with it that we’ve devoted a whole post about how to get it right. Unlike some Japanese customs, those regarding onsen actually make perfect sense, so they’re not too difficult to remember.

The most important thing to know is that you must be naked to bathe in an onsen (no swimming costumes or trunks, sorry!), and that you must wash yourself thoroughly in the showers provided before you get into the bath. Remember these two things and you’ll be fine.

The Japanese are world-famous for bowing, and you will see it everywhere you go. Don’t worry too much about doing it yourself – but a small bow or nod of the head can be useful to express thanks or apology.

Bows are pretty multi-purpose, and (like onsen) have their own perplexing etiquette that I am perfectly willing to admit that I do not understand. Very few foreigners do.

In very simple terms, the depth and duration of the bow is directly proportional to the depth of feeling being expressed – whether it is in thanks, apology, or respect. Deeper bows are more formal, shallower bows are more informal. Some bows require a bow in response, leading to endless exchanges of progressively shallower bows as each party backs away (sometimes, amusingly, into other objects or people). An inferior will bow more deeply and frequently than their superior, and so on and so forth – you get the picture. It’s complicated.

Luckily for you, most Japanese will just shake hands when dealing with a foreigner, so you don’t really need to worry about it.

4) Don’t blow your nose in public

Whilst in Western countries it is generally rude NOT to blow your nose, in Japan the reverse is true. Blowing your nose in public is frowned upon, and most people will just keep sniffing instead. It is especially rude to blow your nose at the table – so take heed!

5) The minefield that is eating and drinking

This is another area of Japanese culture where what I don’t know could fill volumes – and truly it deserves its own blog post at some point in the future.

You will probably spend most of your holiday safely eating with your fellow travellers, but it pays to be aware of a few of the main points just in case you get invited to dinner or make some Japanese friends while you’re out and about.

Firstly, noisily slurping your noodles or soup is not just not rude – it’s actively encouraged, and is considered a sign of appreciation for your meal. Picking up your bowl to drink the contents or eat the last few scraps is also perfectly fine. You should also avoid pouring soy sauce on white rice, eating or drinking while walking around, or refilling your own glass (you should, however, fill the glasses of your companions when you see that they are empty).

This really the briefest of summaries – but if I get in any deeper we’ll be here all day.

Tipping is not the done thing in Japan, and if you do leave a tip you will generally find that the waiter/waitress/bartender will come running after you to return your “forgotten” change.

While we’re on the subject of paying – you may notice that at many cash registers there is a small tray next to the till. This is so that the purchaser can place the money down rather than handing it directly to the cashier, and it should always be used when provided.

Being “fashionably late” is not a thing in Japan (why is it ever a thing?) so if you have made an arrangement to be at a certain place at a certain time, you will be expected to turn up at that time. (This is one rule of etiquette that I solemnly wish would be implemented in every culture around the world).

This is particularly true at mealtimes in traditional Japanese inns (called ryokan), where great time and effort goes into food preparation and presentation. Here, where even your morning meal is a culinary work of art, it is insulting to your host to skip a meal or to turn up later than expected, although they will never tell you so directly.

Of course, if you get lost on the way to an appointment or reservation, a certain amount of leeway should always be allowed!

8) Be careful how you beckon

The customary “beckoning” gesture used in Western cultures (palm facing inwards toward the beckoner, fingers pointing upwards) is rude in Japan. Instead, the Japanese beckon to each other with the palm and fingers facing downwards. It’s difficult to explain, so watch this video for clarification.

Number nine will be particularly important for those visiting Japan on business – as giving business cards is very important and, surprise surprise, has its own complicated system of etiquette.

The main thing to remember is to take great care when exchanging business cards, treating any proffered card with respect amounting almost to reverence. Cards should be exchanged at the start of the meeting, offered with two hands and a bow, and received with two hands and a bow. Once you have received somebody’s business card, make a show of studying it before placing it in front of you on the table or carefully putting it away in a business card holder.

Don’t offer or receive business cards casually or with one hand, don’t just pop them in your pocket or wallet, don’t write on them, and don’t toss them across the table. Essentially treat the card as though it were an extension of the person who gave it to you.

Greetings. This is not a subject that you need trouble yourself about while travelling in Japan – and like so many others on this list it is a topic that really deserves its own blog post. As a subject that I find endlessly entertaining, however, I thought it was significant enough for inclusion on this list.

Greetings are highly important in Japanese culture. Whereas the rest of us make do with the standard hello/goodbye set-up, in Japan there are different set greetings for almost every situation you could possibly imagine. Entering a room, leaving a room, leaving your house, returning to your house, welcoming somebody else home, bumping into a colleague, beginning a meal, finishing a meal… the list goes on. And on. And on.

Since you are unlikely to be conversant in Japanese, you do not need to worry about the various Japanese greetings. The only ones you’ll need are “konnichiwa” (hello) and “sayonara” (goodbye)! And, as always, a little bit of Japanese, a smile and a willigness to give it a go, goes a long way.