Skip to content
Thank you for signing up!
Subscribe to our Newsletter
HOME » Blog » Taking part in a Japanese festival

Japanese festivals – matsuri – are an important part of life in Japan. You will find them in every region of the country during every season of the year. But the best time for catching matsuri is undoubtedly in summer, when festivals are so plentiful that it’s not uncommon to come across them by chance as you travel through the country. Even in Tokyo, a haven for fashion trendsetting, young people are seen on the underground heading off to fireworks festivals and other matsuri in yukata, a sort of light cotton kimono. Yet amongst the thousands of matsuri, there a handful that stand out among the rest. One such matsuri is the 350 year old Fukagawa Matsuri.

Once every three years this huge water throwing festival is held in downtown Tokyo. Over 100,000 people gather to watch as 53 mikoshi (portable shrines) weighing from around 2 tons to 4.5 tons are boisterously carried 8 kilometers through local neighborhoods on the shoulders of men and women in traditional costume. This alone would be a site worth coming to Japan for but what makes this festival particularly special is the fact that water is being thrown on to the shrines as they slowly move through Tokyo’s streets. While some of this comes in the form of children with buckets and water pistols, the fire department also joins in at tens of locations to dowse the participants with fire hoses!

Here is a brief description of what it is like to participate in one of Tokyo’s three “great” festivals. I awoke at 4:30am and took the train to Monzennakacho, a station that is truly at the heart of the Fukagawa Matsuri. Although there was no traffic at this early hour, there was plenty of activity. Hundreds of locals could be seen scurrying around the streets in their happi Japanese tops, white shorts and split-toed shoes. As not just anyone can participate in the festival, I was met by the family who gave me the “introduction” to partake. Each of the giant mikoshi (portable shrines) is associated with a particular district of the local area. There are 53 in total. 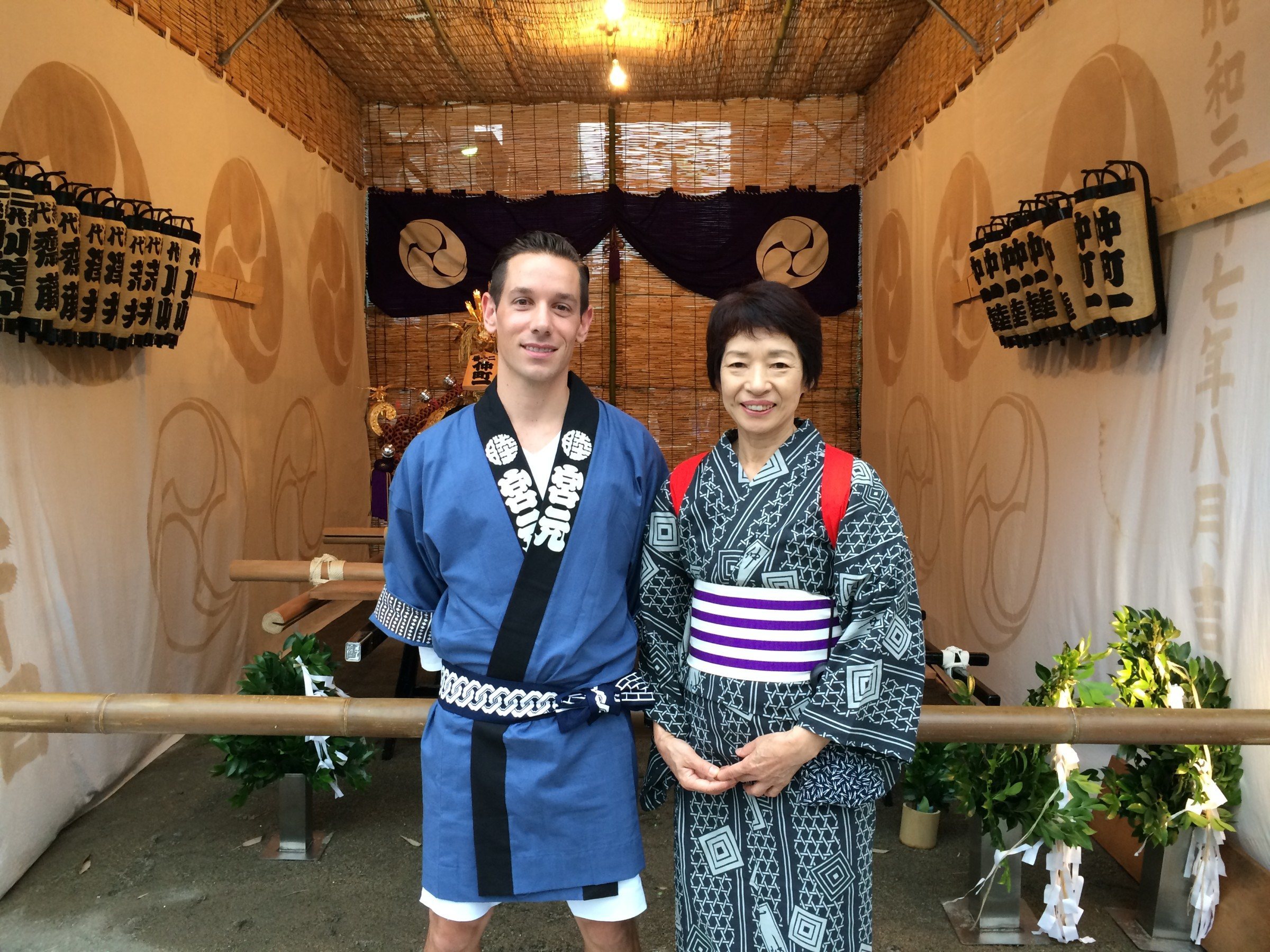 After quickly changing in to my costume I gathered with the other participants and we ate onigiri – rice balls with different fillings – and got ready for the days event. At 7:30am we moved down the street to where the mikoshi for our district was set up and waiting for us (see below).

As our turn came, around 40 of us heaved the 2 ton float up on to our shoulders and began the 8 kilometer walk through Tokyo. Slowly marching through the streets as we chanted “washoi!!” and bounced the float up and down. But what really made this festival a day to remember was the water that was poured on our mikohsi – and us! – as we walked about. Kids and adults alike splashed us from all angles. Any spectator is able to join in on this aspect of the matsuri and so the day ends up feeling like a giant water fight! 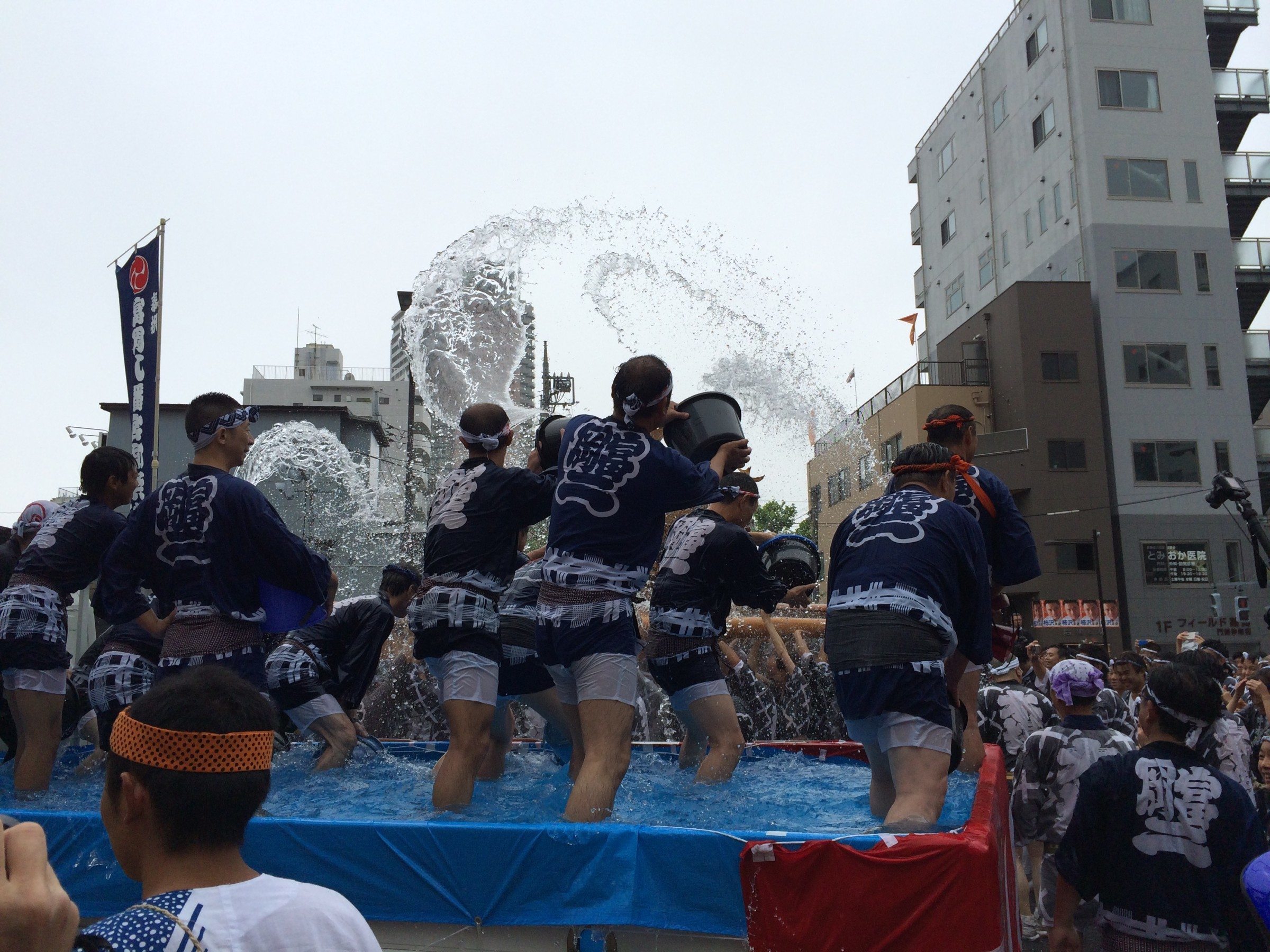 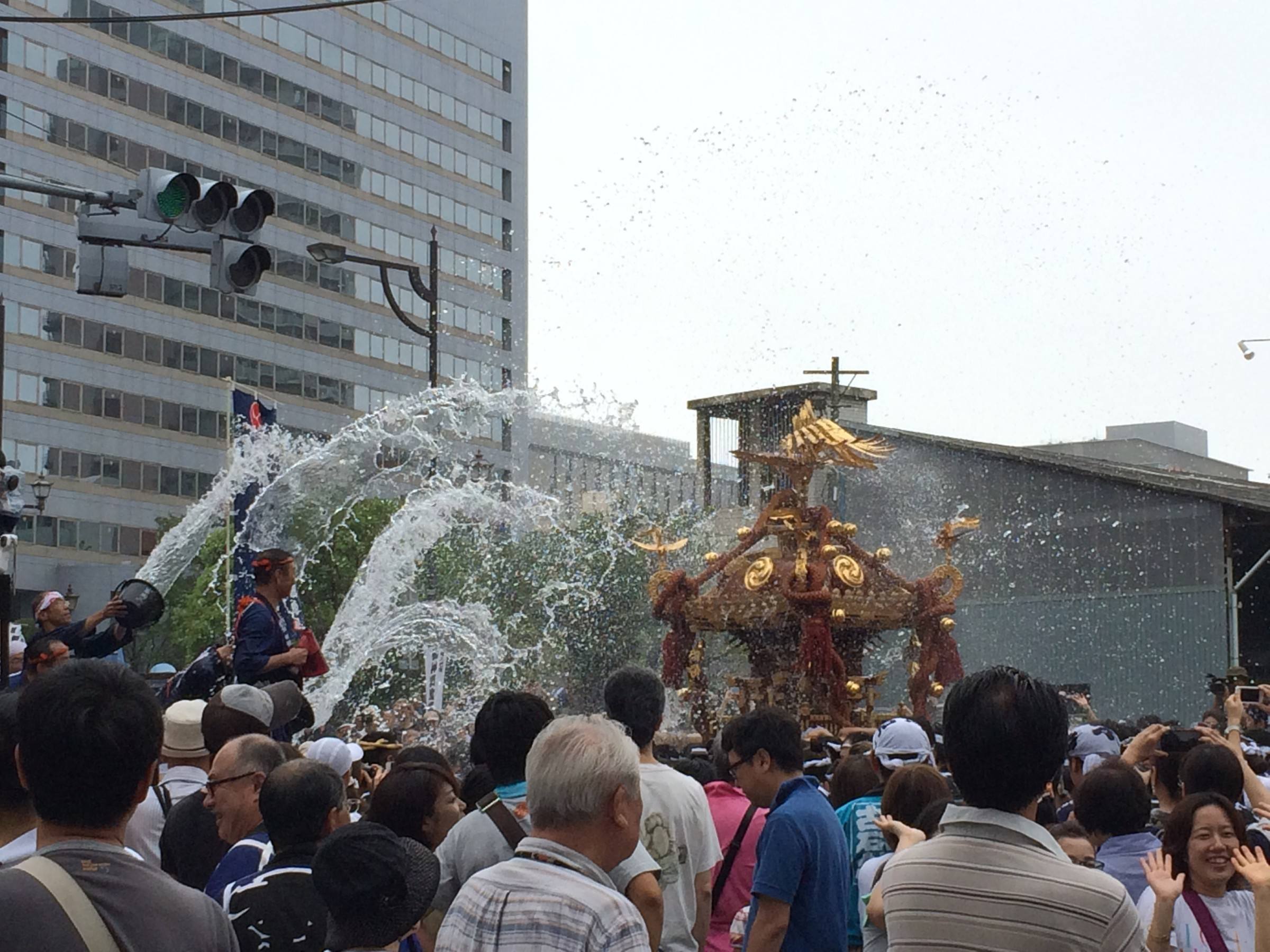 At splash stations like the one above we lift the mikoshi above our heads so that other participants can drench the mikoshi and us below with cold but refreshing water. But the 53 shrines being paraded around are not the only thing that this festival has going. There are multiple places where traditional Japanese music is being played and even several large taiko drumming areas where the loud drums set the pace of the chanting of the shrine bearers like myself. In order to show respect to the musicians we lift the mikoshi above our heads as we pass. There are also floats along the route selling beer and shaved ice for the onlookers, those of us carrying the shrine have to wait till the afternoon.

We all take turns carrying the float and there is a morning rest stop and a midday break for lunch but even so by the afternoon my shoulders are bruised and battered. And my feet are sore from the massive weight crushing down on them.

Of course, my personal favorite part of the matsuri is after we finish and I can sit down with my friends for a few well deserved beers.

Seeing matsuri in Japan is truly a “once in a lifetime” type experience. The friendly and fun-loving nature of such festivals ensures that all are welcome. Aside from some fantastic pictures, you are likely to go home with some new friends as well!

There are thousands of festivals all over japan throughout the year. You may just stumble across a small festival on your travels in Japan, but if they are on and we know about them, we can help you catch a Japanese festival during your trip.