Skip to content
Thank you for signing up!
Subscribe to our Newsletter
HOME » Blog » Family Adventures in Japan

After several weeks in the Nagoya office researching and writing about Japan for our destination guides, this month I finally had the chance to travel to some of the places I’d read so much about! Joining me on my travels  (which were planned and organised here at IJT to include a little bit of something for everyone) were my family and my boyfriend, Adam. 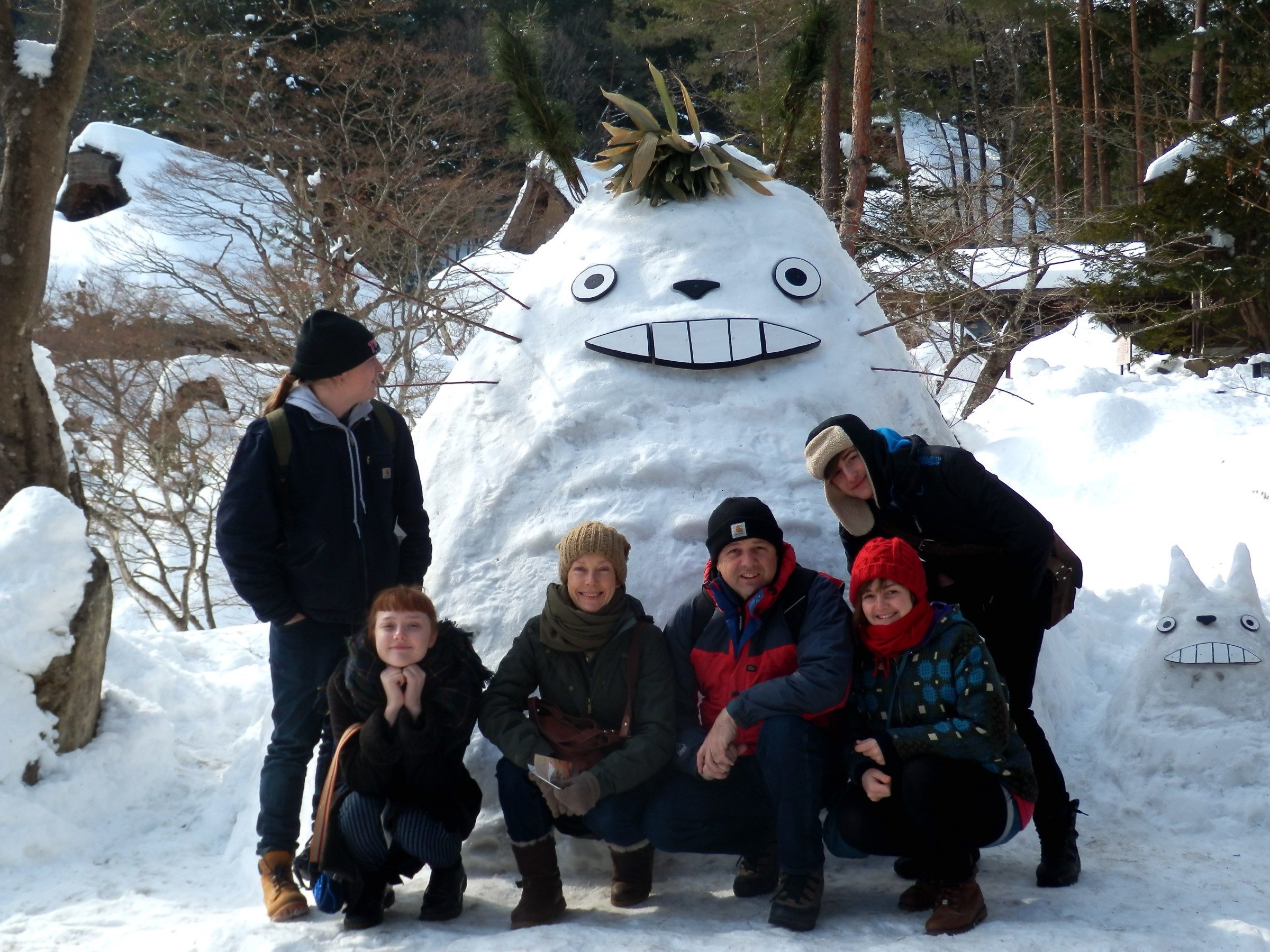 Like so many travellers, we chose to begin our adventure in Tokyo. Unlike most travellers, however, we found our first-day plans thwarted by the worst snowstorm seen in the city for nearly fifty years! After having spent several weeks assuring my Mum that Japan wasn’t going to be that cold, this threatened to throw a spanner in the works. Looking out over Tokyo from the new Skytree tower isn’t as great in a blizzard, I’ve heard. Nevertheless we managed to fight our way out of the hotel for an Izakaya-style dinner and a few drinks in Ginza to toast the start of the trip.

On our second day the weather gods smiled upon us, the skies cleared, and Tokyo was transformed into a sparkling white landscape quite unlike the city I had visited many times before. After surveying the transformation from the top of the Metropolitan Government Buildings our guide took us on a whistle-stop tour of the city – beginning at a Shinto wedding at the Meiji Shrine, on through the candy-coloured shops of Harajuku to Shibuya’s scramble crossing and finally the dubious delights of Akihabara. Here we opted to end our tour with a coffee in a Maid Café – an experience that left most of us rather bemused, and left my sister convinced that she had found her dream profession.

A plastic food-making workshop at Kappabashi-dori, a visit to Odaiba’s giant Gundam statue and the Studio Ghibli Museum, an Okonomiyaki lunch and shopping spree in Asakusa later, it was time for us to hop on the Shinkansen bound for the other end of Honshu – and Hiroshima. 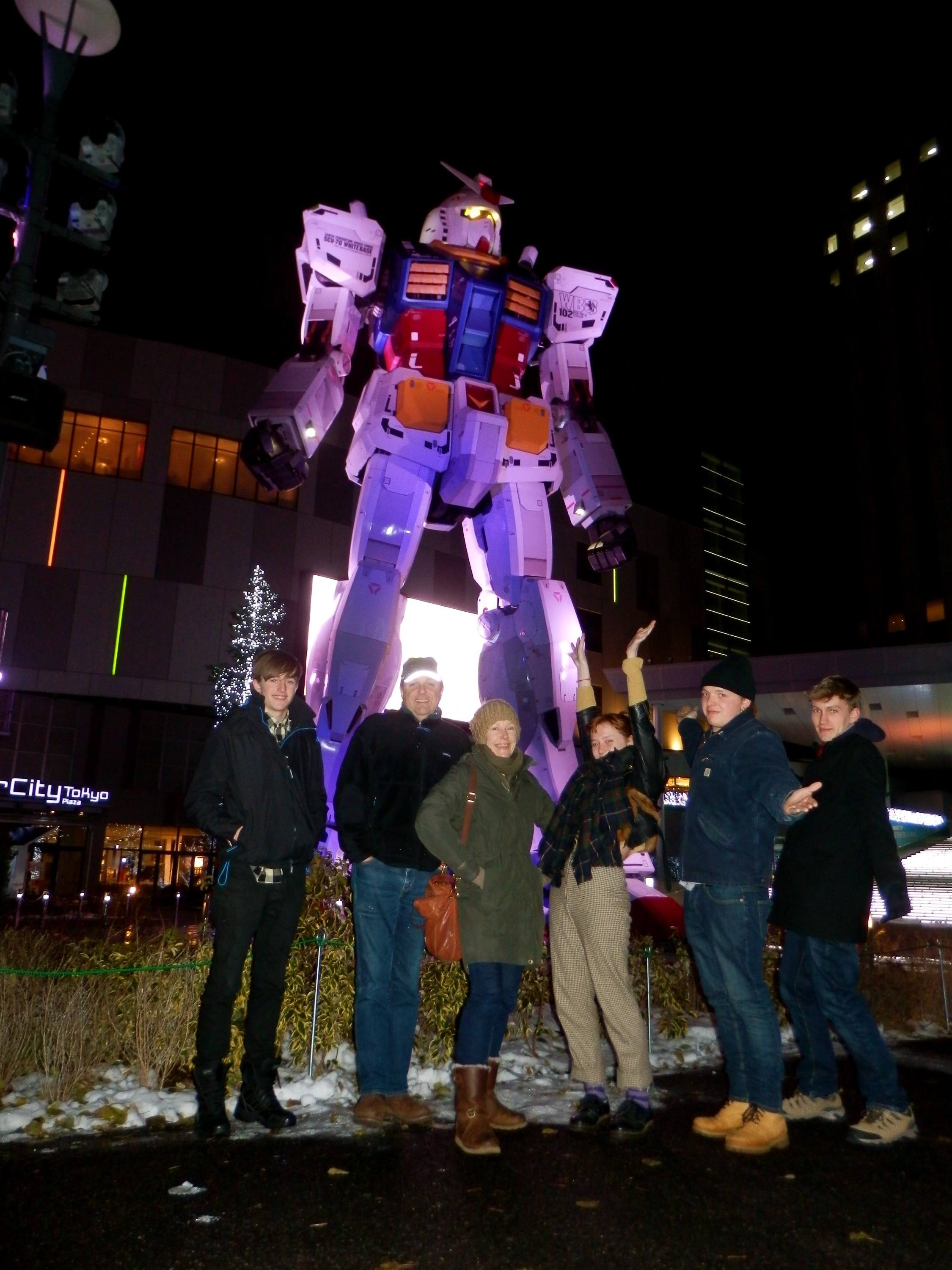 Here we spent the afternoon mulling over the contents of the peace museum before making our way to Miyajima by ferry, where we spent two lovely nights at the Yamaichi Bekkan. The food here was delicious (especially the Oysters – a local speciality), the owner incredibly friendly, and the peaceful island atmosphere the perfect tonic after a frenetic few days in the capital.

For anyone planning to walk to the top of Miyajima’s Mt. Misen, however, a word to the wise: when the IJT destination guide describes the route as “arduous,” you’d better believe it! We lost count of how many steps we climbed (and how many slips on the ice!) by the time we reached the top, but the views over the Seto Inland Sea were well worth it in the end.

The highlight of our time in Miyajima was coming across the biggest shamoji (rice paddle) in the world. Truly a covetable accolade:

The next stop on our journey was Kyoto, and yet more snow! As our guide whisked us from temple to shrine, we were impressed with the ingenuity of Nijo Castle’s “Nightingale floor” – which was devised as a sort of feudal-era burglar alarm to forewarn the inhabitants of intruders, and today makes a rather eerie accompaniment to a tour of the castle. Unfortunately we found the Ryoan-ji rock garden had been transformed by the snow into more of a white rectangle with lumps – but this disappointment was made up for by a visit the Golden Pavilion in all its snowy glory, a sight that few tourists are lucky enough to experience. Add to this a wander through through Gion to the Yakasa Shrine, a stroll to Kiyomizu Temple, a stop at Ninna-ji and another uphill ramble at Fushimi Inari Shrine – and by the end of our stay in Kyoto we were well and truly templed out!

On leaving Kyoto, we swapped the bullet train for a more leisurely ride through the beautiful mountain and river scenery leading us to the last (and snowiest) leg of our journey, which would take in stops at Takayama, Matsumoto, Nagano and finally Yudanaka Onsen.

At the Yamakyu hotel in Takayama we were greeted by a stuffed horse at the keys of a tiny electric piano, and treated to more delicious Japanese food than we could possibly eat. Here we spent a morning exploring the Hida no Sato folk village with its “gassho zukuri” (or “praying hands”) houses and had particular fun attempting to master the old-fashioned bamboo skis and sleds provided. It wasn’t long before curiosity drew us to the Sukyo Mahikari World Shrine, whose unmistakable profile can be seen from all over the valley. Haunting music drifts across the town from the shrine at intervals throughout the day, and inside the vast entrance hall is decked out in an eclectic mix of religious iconography, fake foliage and a giant fish tank – certainly nothing like any other shrine we’d seen in Japan!

Later on, in search of a watering hole, Adam and I stumbled upon a bar roughly the size of a postage stamp, with space for three punters at best and a shelf housing a row of whiskey bottles labeled with their owners’ names. As the elderly proprietress plied us with bowls of unidentifiable vegetables and harangued us to know why we were not married yet, it was easy to feel as though we had inadvertently wandered into a Japanese obaachan’s front room by mistake!

From Takayama we headed (via Matsumoto’s “Black Crow” castle) to Nagano and yet another temple – this time Zennkoji, where we would be staying the night and sampling traditional Buddhist fare, or “Shojin ryori.” At the crack of dawn the next day, some of us even managed to drag ourselves out of bed and into the cold to catch the monks at prayer, before being ushered down into a pitch-dark passage beneath the temple to experience one of the stranger religious customs I’ve encountered in Japan. Here we were instructed to find the key to paradise by feeling our way along the walls of the passage. We found the key, but paradise was not forthcoming.

Finally we made our way to Yudanaka Onsen for the last night of our trip. At Jinpyokaku Ryokan we were provided with the nicest accommodation we’d had so far, and could hardly bring ourselves to leave our beautiful, cozy rooms. But, of course, we had to make our way out to see the famous snow monkeys! Only the day before we arrived the park had been inaccessible due to heavy snow, but we were lucky enough to find that the paths had been reopened just before our arrival – and so I was able to fulfill my long-held ambition to see the monkeys relaxing in the hot spring waters. 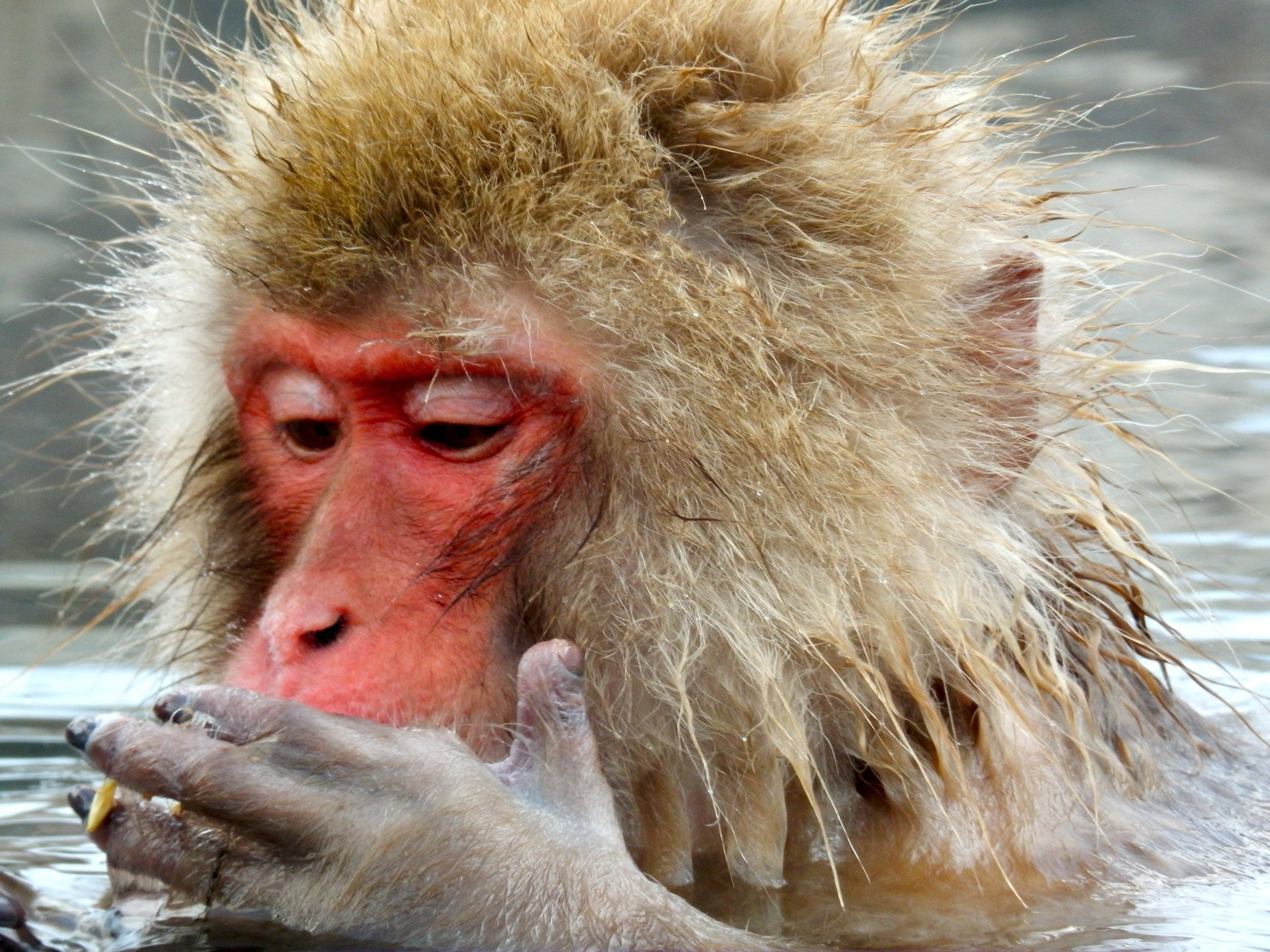 All good things must come to an end, and after prizing ourselves away from the warmth of our kotatsus we made our way back to Tokyo to go our separate ways.

A great big thanks to IJT from all the Cloutmen (and Adam) for a fantastic family trip and some wonderful memories! 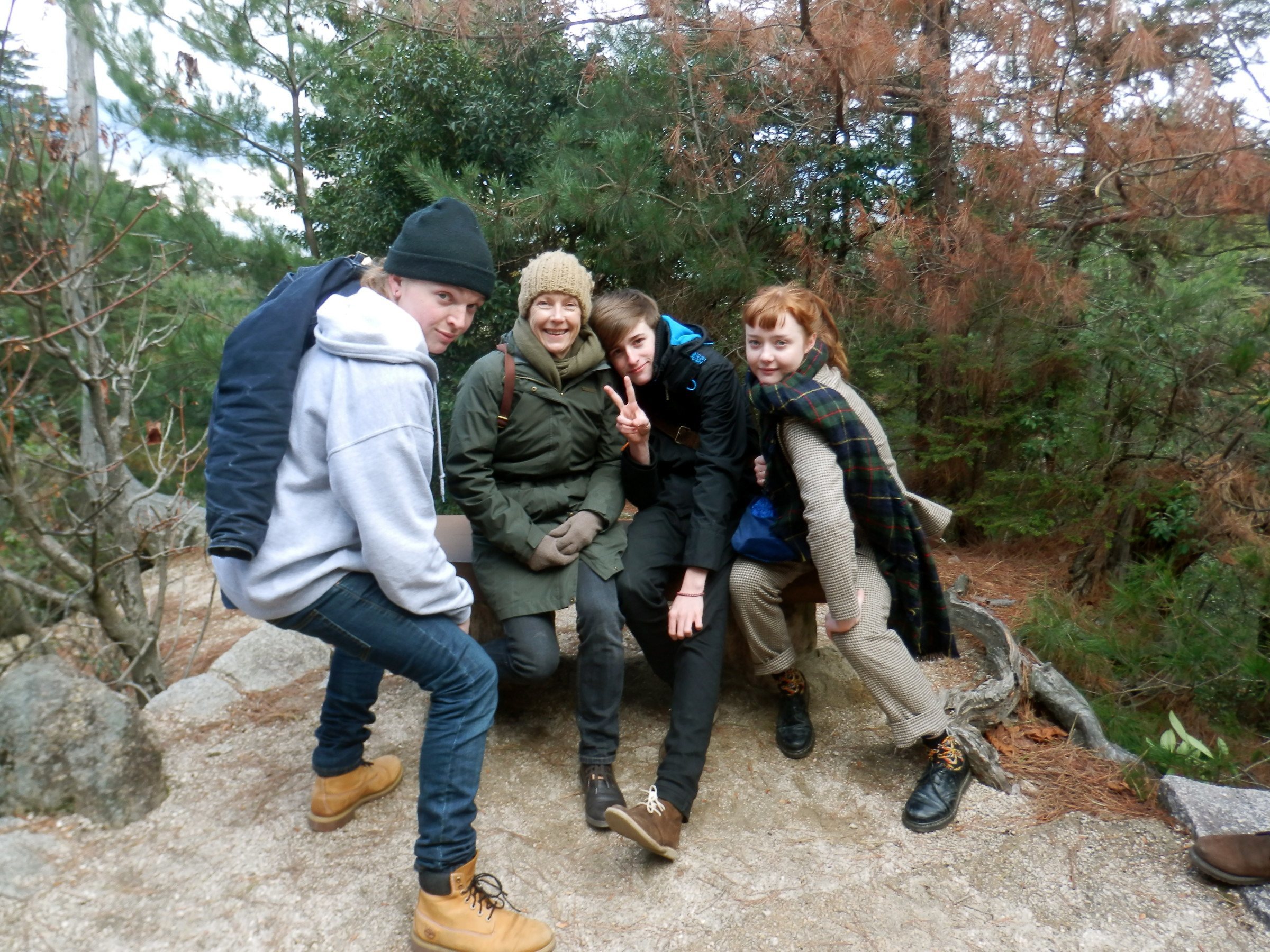 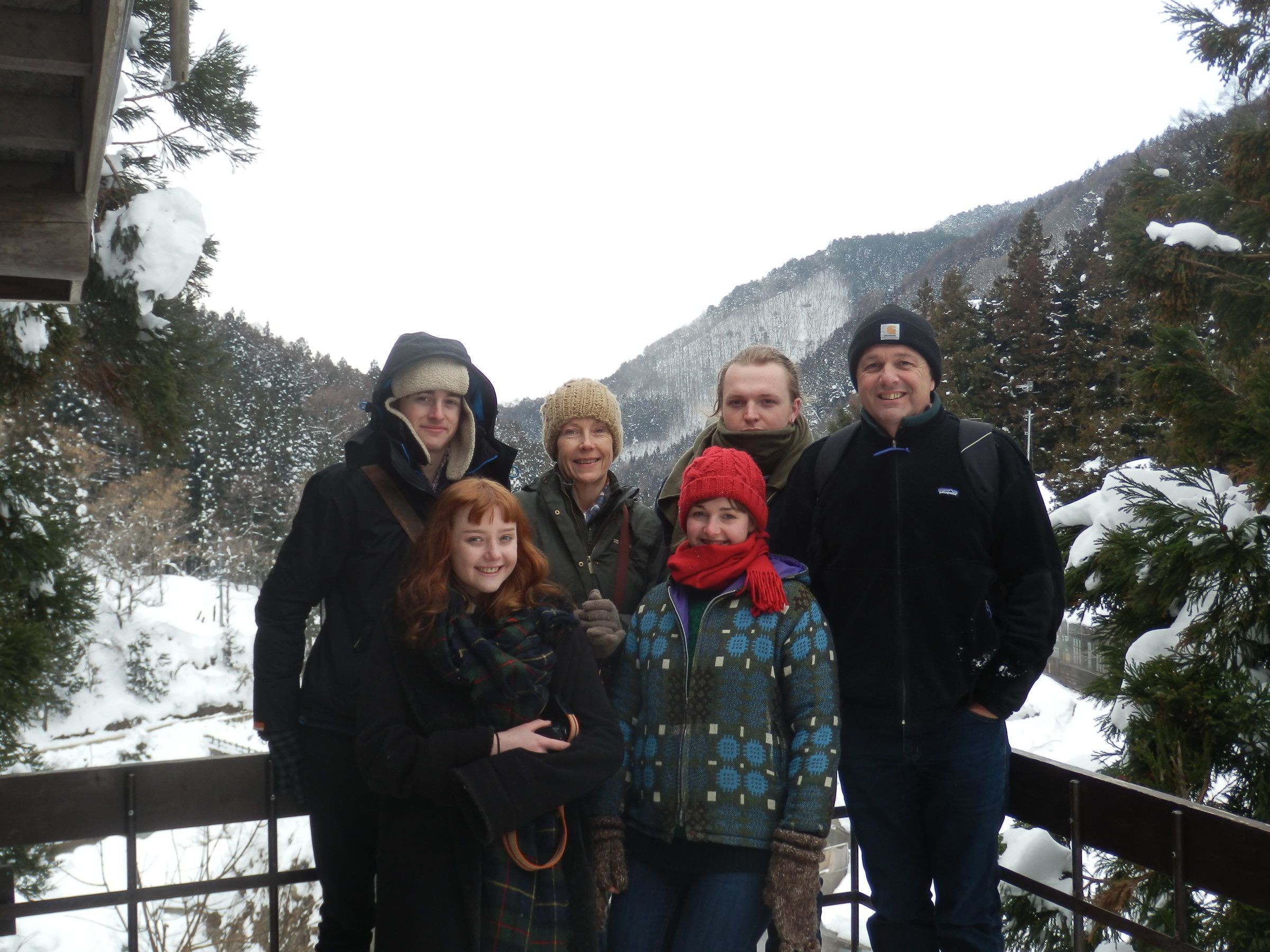