Skip to content
Thank you for signing up!
Subscribe to our Newsletter
HOME » Blog » Top 10 Okinawan Foods You Must Try

Continuing our top 10 lists of japan, InsideJapan’s Violet has been living in Okinawa for the last couple of months and is getting into her subtropical island specialities. Here are the top 10 Okinawan foods you must try…

If there’s one thing that Okinawans define themselves by, it’s this knobbly green vegetable known in English as “bitter melon.” Okinawa boasts the highest life expectancy in the world – even higher than that of mainland Japan – and popular belief credits the islanders’ longevity to their consumption of goya. With a texture like cucumber and an extremely bitter flavour comparable to that of green bell pepper, goya can be hard for some foreigners to get used to! Nevertheless, you should give it a go in Chanpuru (Okinawan stir-fry) or raw in a salad.

Benimo is the name for Okinawa’s native bright purple sweet potato. This root vegetable is almost as ubiquitous as the goya, and many would say much more palatable! It can be eaten boiled, but it’s much more common to find it as a flavouring for pretty much every kind of sweet thing – including ice cream, drinks, kitkats – even spaghetti!

Taco rice is one of the results of American influence in Okinawa, and has become an island specialty. Consisting of minced meat, cheese, tomato sauce, chopped tomatoes, rice and lettuce – it’s basically all the components of a taco without the taco itself. Delicious Okinawan ‘fusion’ cuisine!

Shikuasa is a native Okinawan citrus fruit that resembles a green mandarin, and is used to make fruit juice and to flavour various sweets and cakes. 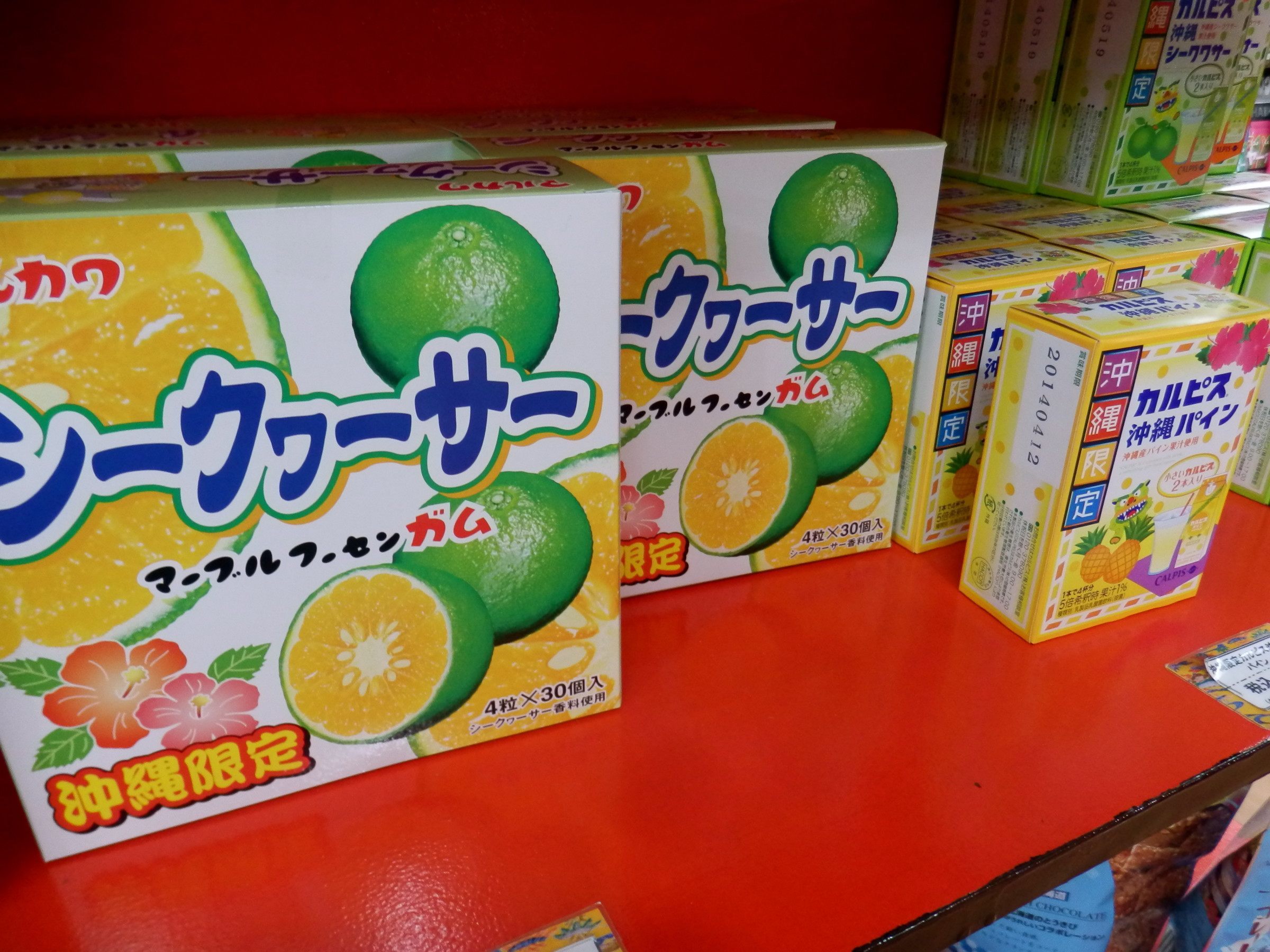 Umi Budou is a special type of Okinawa seaweed whose name literally means “sea grapes.” It is also sometimes known as “green caviar” due to its tiny, bubble-like sacs and distinctive texture. Best eaten fresh, with rice and salmon roe.

Chanpuru is the Okinawan version of stir-fry and can include a variety of ingredients – but perhaps surprisingly, the most common component is Spam or some other type of “luncheon meat.” A love of Spam is another result of the American military presence in Okinawa, and souvenir shops proudly display tins of processed meat beside traditional Ryukyuan souvenirs. Perhaps it is this mystery ingredient, and not goya, that is responsible for the islanders’ long lives…

Okinawans are crazy about pork, and particularly proud of the fact that they eat every part of the pig – from its ears to its toes (literally). “Mimiga” is a dish consisting of strips of pig’s ear, which has a crunchy, cartilege-y texture, whilst “Tonsoku” means pig’s trotters, and you can sample these in a noodle broth, or “don.” Another traditional dish is “Rafute”, which consists of thick cuts of boiled pig’s belly. You can also find vaccuum-packed pig’s faces in many souvenir and grocery shops, which most foreigners find somewhat disconcerting.

Yagi sashimi is the only dish mentioned here that I have yet to try, but it’s next on the list! Simply put, it consists of raw goat’s meat. This island speciality is less popular than other Okinawan favourites, perhaps due to its strong smell and chewy texture. Not for the faint-hearted!

Chinsuko is a variation on shortbread, and comes in many different, delicious flavours. (Not to be confused with “chinko”, which is Japanese slang for penis.)

Finally, if you’re in Okinawa, you should get your hands on some Okinawan black sugar, or “kokuto.” With a flavour reminiscent of liquorice, kokuto is added to many Japanese dishes, but can also be eaten as a sweet on its own. Goodbye teeth.