Skip to content
Thank you for signing up!
Subscribe to our Newsletter
HOME » Blog » Tokaido Trailing Diaries – Hot springy mountains

Continuing along the Tokaido coast of Japan, the trip ventured into the mountainous Hakone national park famed for hot springs, black eggs, secret wooden boxes and samurai history. Don’t know what I am on about? – Read Rob’s  account of his next couple of days on the Tokaido Trail…. 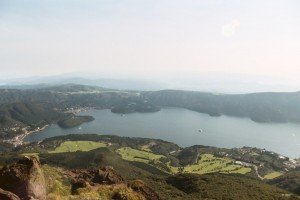 Another day, another variation on the Japanese style of breakfast. By now, I was becoming more accustomed to the food on offer – the salmon this morning was particularly tasty. We said farewell to most of our luggage at this point, with the larger cases and rucksacks being forwarded on to our hotel in Kyoto with typical Japanese efficiency and security – at no point on the tour did I have any doubts whatsoever that the locals would treat both us and our belongings with the utmost of respect and decency.

We headed off towards Hakone, first on the JR train, and then a local bus. Being a little tight on space, this is why we had to travel a bit lighter on our feet.As a self-confessed petrolhead, the roads from Odawara up to Hakone had me almost drooling in anticipation. Stunning scenery, hairpin bend after hairpin bend as the road rose in continuous switchbacks higher and higher in to the mountains. This was the legendary kind of road where the craze for “drifting” high powered sports cars had blossomed, and I kept my eyes peeled for the sort of machinery which had my right foot twitching for an imaginary throttle pedal!

Our base for the next couple of days was the charming Fuji Hakone ryokan, a traditional family-run guesthouse, complete with futons, Tatami mats on the floor, sliding timber and paper screens, and of course, the onsen hot spring baths. The warmest of welcomes had it feeling like a home away from home; this was exactly the sort of accommodation I’d been looking forward to experiencing. With the mountains dominating the skyline above the small town, this was probably my favourite location we stayed in all tour.

We hopped back on the bus, heading towards Gora for some lunch – pork ramen noodles this time, up until now the most delicious thing I’d eaten all tour, prompting me to use a new Japanese phrase “gochiso sama deshita” for the first time. Alain was babbling on excitedly about something he called the “Batman Wheel”, but would tell us nothing more, leaving us slightly baffled until we got to Gora and found a massive turn-table to spin the buses around!Another ingenious solution typical of Japanese engineering, it elegantly solved the problem of how to execute a three-point turn in a confined space. Why can’t we come up with these things in the UK?

Back on the bus after lunch, we were taken to the Hakone Open Air Museum, to see the modern art exhibitions. I really wasn’t expecting this to be my cup of tea, but do you know what? I really enjoyed it! OK, I can’t profess to understand the deeper meanings behind the majority of the pieces, but they were certainly striking to look at, set in a beautifully scenic location with a calm, relaxing atmosphere. We were lucky with our timing, as the trees were just starting their Autumnal change, providing us with a riot of colour. A little bit of culture can be good for you, it seems, helped by Joss and myself taking advantage of the hot stream foot bath to sooth the soles.

Dinner in Hakone that night gave me another excuse to use my newest Japanese expression. I’d thought the noodles I’d had at lunch time were pretty tasty, but the ginger pork with noodles, Japanese curry rice and draught Asahi I had that night were simply mouth-watering – another very fine recommendation from Alain! After a dip in the onsen hot spring bath, I retired to my futon for the night.

Today we were to circumnavigate the Hakone “Loop”, so it was back on the bus to Gora to catch the funicular railway, climbing the slope to the first section of cable car ropeway taking us up to Owakundani. Looking down on the sulphuric hot spring vents looked more like the surface of an alien world than Planet Earth, and the bright yellow stains gave forewarning of the stench we were about to experience. Now that is a smell which permeates the linings of your nostrils, so strong you can almost taste it. Eating one of the local kuro-tamago (eggs, hard-boiled and blackened in the hot springs) is said to extend your lifespan by seven years, but I couldn’t bring myself to attempt one. 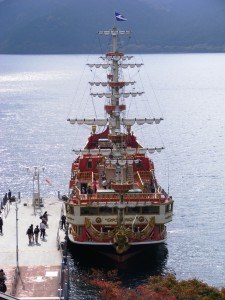 The last section of ropeway took us down to Lake Ashi, and the pirate ship cruise – yep, you read that right – pirate ships! OK, they’re just modern cruise ships decked out to look like pirate ships, but it’s yet another typically over-the-top Japanese experience. Bizarrely, I got talking to a couple of lads from Nepal who wanted to know how far Scotland was from London, and asked whether we’d seen Mount Fuji yet – they said with a grin that they had proper mountains where they were from, not these mere hills! 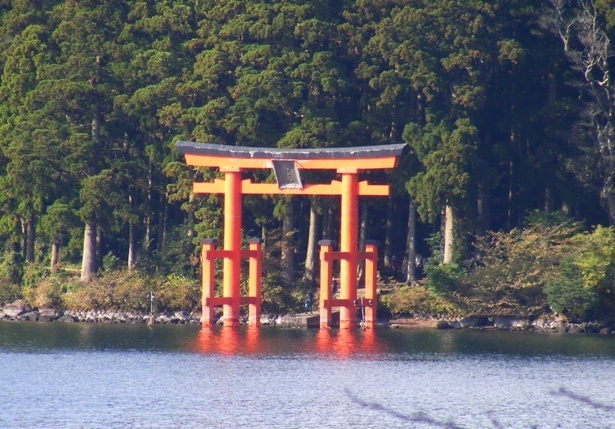 Once docked in Moto Hakone, we paid a visit to the puzzle box shop. The proprietor came out and gave us a demonstration of the techniques involved in creating the wood block designs, the different styles of puzzle box and how they work. Despite him speaking no English, and Alain only being able to sporadically translate what he was saying, I managed to take on board most of what he was telling us. The skill in designing and fabricating these boxes is beyond belief, as not only do they look beautiful, they are incredibly intricate and superbly engineered. The smallest, simple boxes involve just one or two simple moves or taps of the box to open, but one larger box he demonstrated had an astounding 54 moves to unlock – you’d better be pretty sure of remembering the combination before securing your valuables inside! 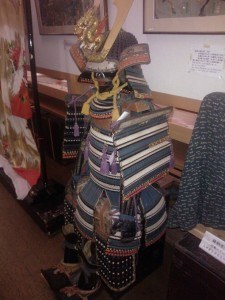 After a quick lunch of noodles, we walked along a short section of the old Tokaido highway, before catching the bus back to the ryokan. Whilst the rest of the group headed in to the ryokan, I took a walk in to the town and tracked down the Samurai museum. I think I took them by surprise with my visit, as the girl behind the counter had to turn the lights back on so I could walk around. It was on the compact size, but they had some stunning exhibits, from katanas and other vicious looking weapons, to intricate suits of armour. This was something else I’d been keen on seeing on tour, as the Samurai are another iconic Japanese image.

I headed back home and rejoined the group at the ryokan. Before dinner, we were entertained by Mai Tsunemi and her traditional Japanese koto, a stringed instrument being a strange mix of guitar and harp. A few of the tour party were encouraged (some might say under extreme peer pressure!!) to have a go themselves, and they all performed with aplomb. Having the natural rhythm of a house brick, I declined the opportunity to embarrass myself in front of an audience. Once back at the ryokan, whilst some people headed for their allocated timeslots in the onsen baths, the rest mingled in the sitting room. It was a great way to round off another packed day, and I slept a whole heap better that night.

So there you have it from Rob. Another packed couple of days Tokaido Trailing in Japan. Next is Kyoto which is often considered the highlight of the trip….everyone is different aren’t they. Find out what Rob and co get up to in the old capital of Kyoto. Yoroshiku!