Skip to content
Thank you for signing up!
Subscribe to our Newsletter
HOME » Blog » Contemporary art in Japan: a roundup of weird, wonderful exhibits and installations

This year, teamLab – the world-famous Japanese art collective – is celebrating 20 years of bringing together art, science, technology and nature with its mesmerising, immersive installations. So, in the name of all things contemporary, arty, and sometimes ultra-futuristic, we’ve decided to mark the occasion by taking a look back at our favourite Japanese art encounters from over the years. There’s a time and a place for ink paintings and ukiyo-e woodblock prints… but suffice to say, this isn’t it!

From teamLab’s technological wonders to Yayoi Kusama’s distinctive colourful creations, these are the exhibits that have really stuck in our memory. 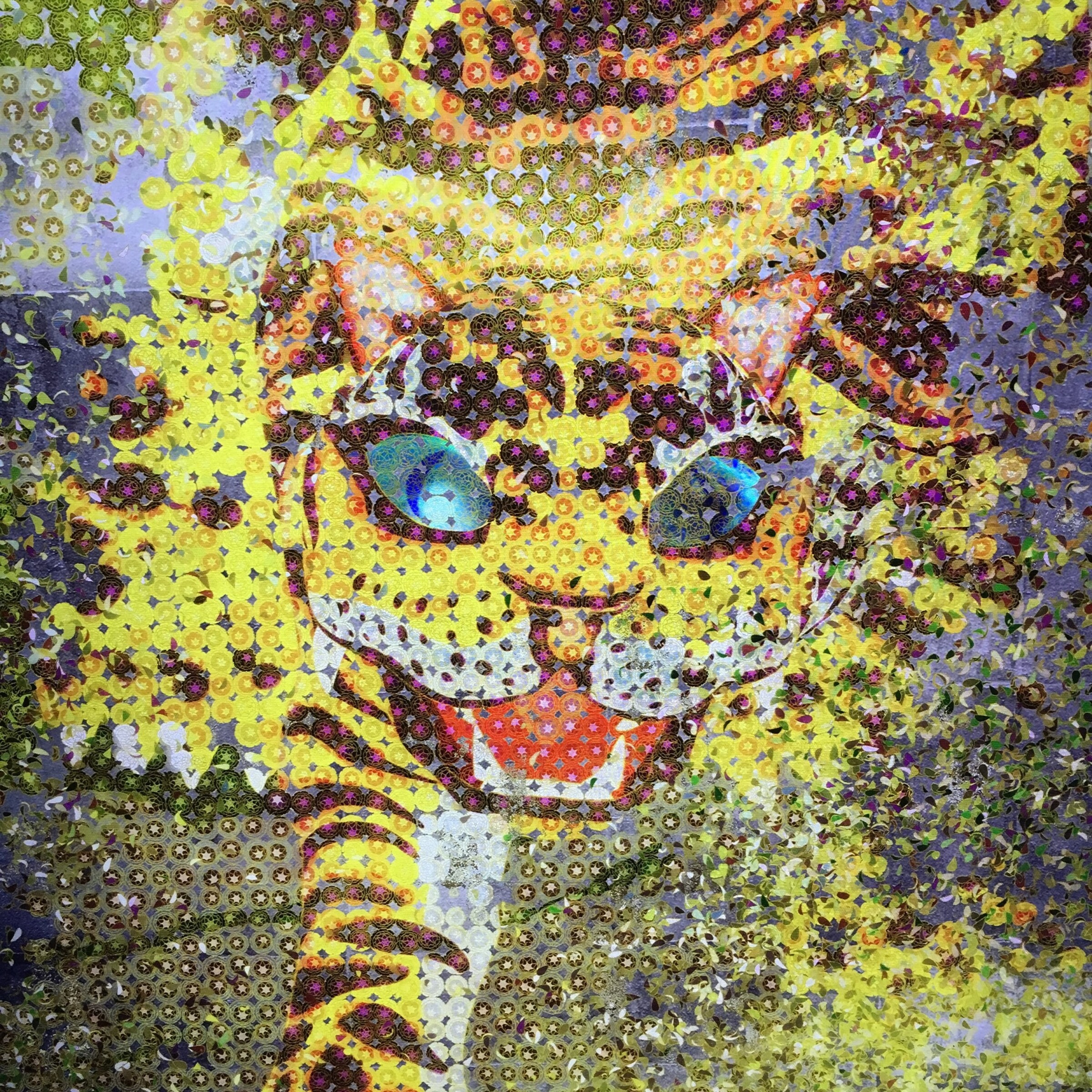 “This was taken during my first visit to teamLab in Tokyo in 2019. I’d seen so much hype online – videos, photos, write-ups – that I figured I knew what to expect, I was still completely surprised delighted once I got there. One of my favorite works was the life-size Chrysanthemum Tiger, which morphed and moved continuously as the flowers bloomed to reveal the image – each fleeting moment an entrancing composition, begging for some quick snaps to remember it by.” 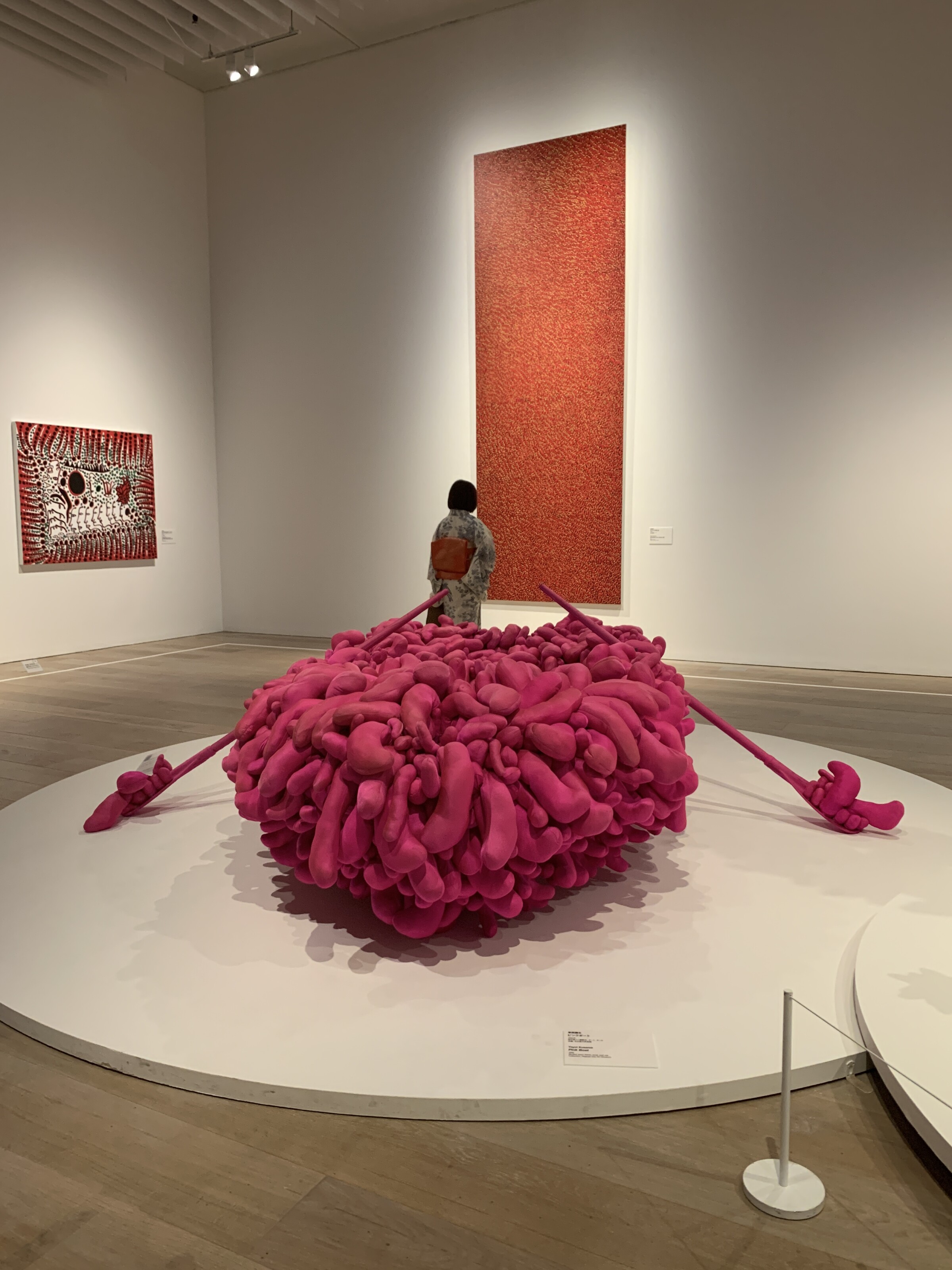 “There is little that can be said about Yayoi Kusama that hasn’t already been said before. At one time she was an outcast, but now she is something of a Japanese national hero. Her artwork has donned the halls of the greatest museums of the world and decorated Louis Vuitton bags.

“This particular exhibit is from my favourite museum in Tokyo, the wonderfully curated Mori Art Museum. If you go on a fair weather day, it is worth paying a little extra to go on to the roof. You should be able to see all of Tokyo and the nearby Tokyo Bay, not to mention Mount Fuji.” 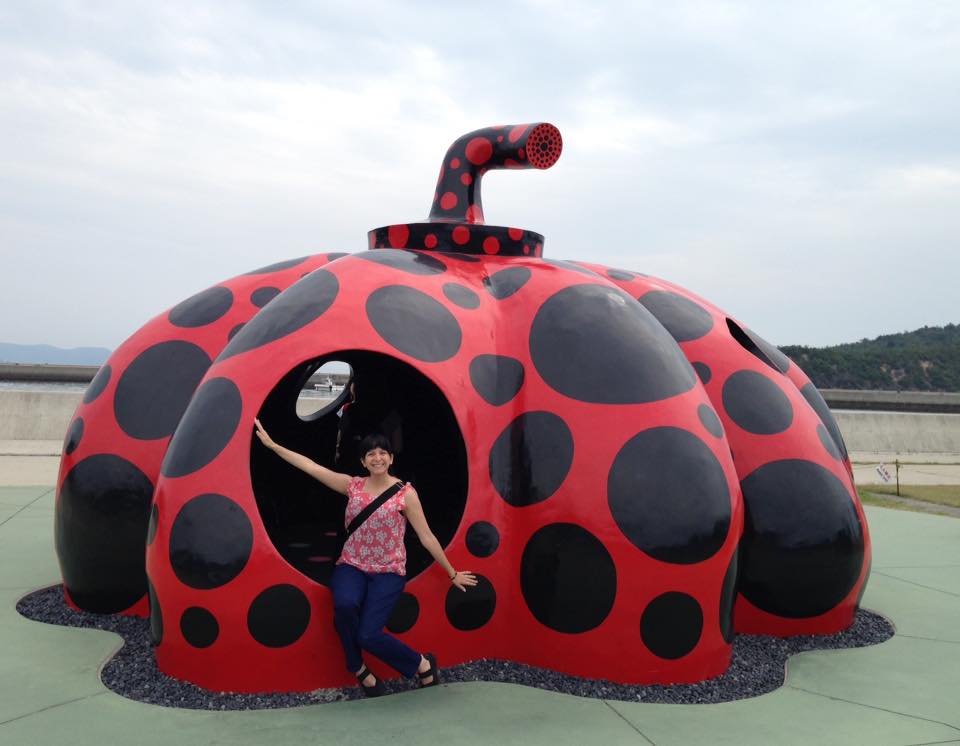 “This photo of Red Pumpkin by Yayoi Kusama was taken at the Miyanoura Port on Naoshima. We arrived on the ferry to be greeted by this cheery sight, and I immediately ran up to get a closer look. It was so much bigger than I imagined, and I felt childlike wonder as everyone (adults and kids alike) climbed in/on/out of the gorgeous gourd like they were in an artsy jungle gym. Not only are the views from the round windows fantastic, but there’s a stained-glass surprise that creates an unforgettable whimsical world inside.” 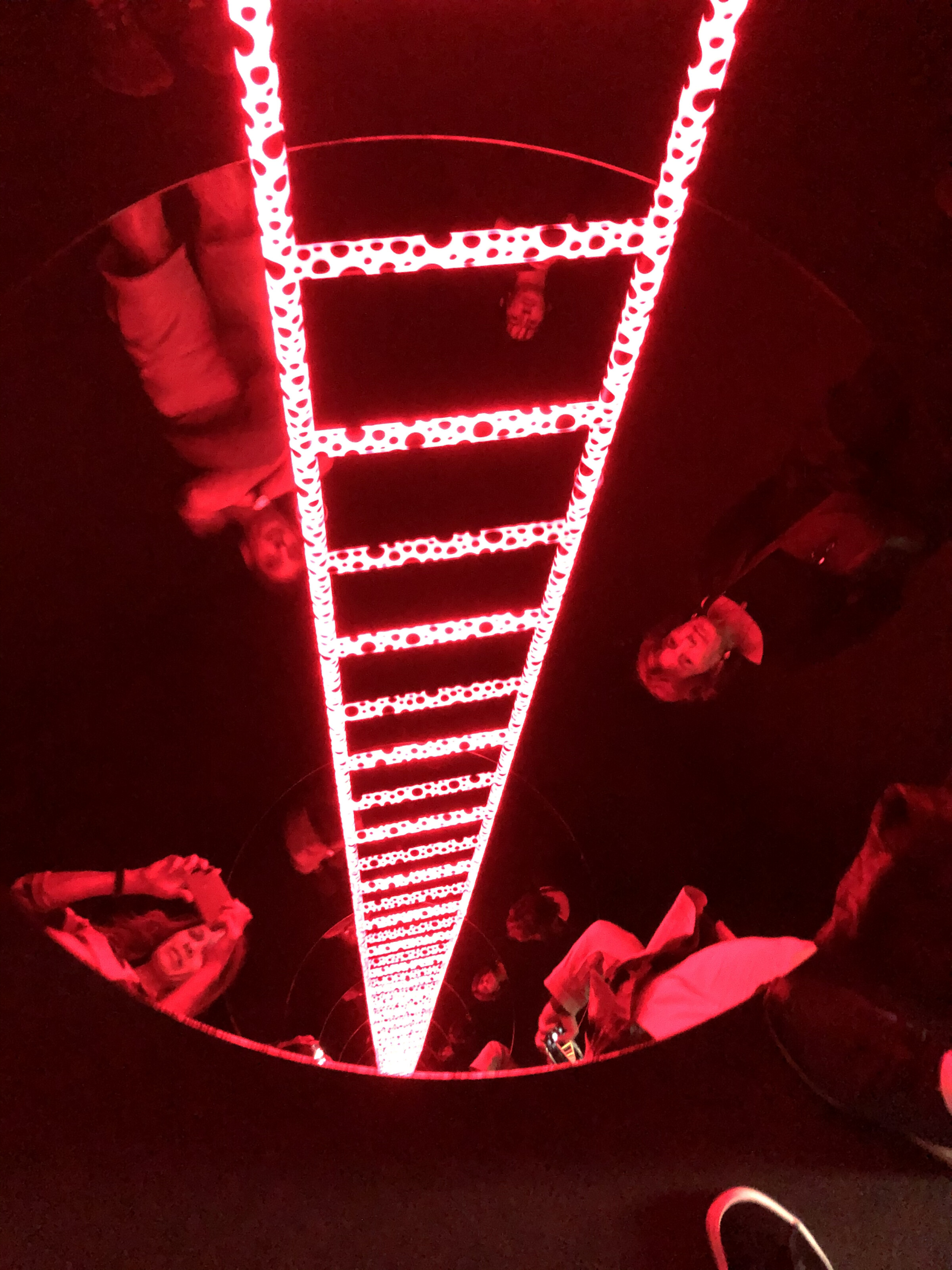 “This piece drew in my whole self as I peered into the contrasting abyss of neon rainbow and pitch-black nothingness. I knew we were looking down into a mirror, but like magic, it felt like I was looking up at the polka-dotted wonder. It compelled me to think about the afterlife and how I would feel seeing this structure at the end of my days. We stood silently for minutes, and you could tell we were all consumed by similar thoughts as we stared into the glowing beyond.” 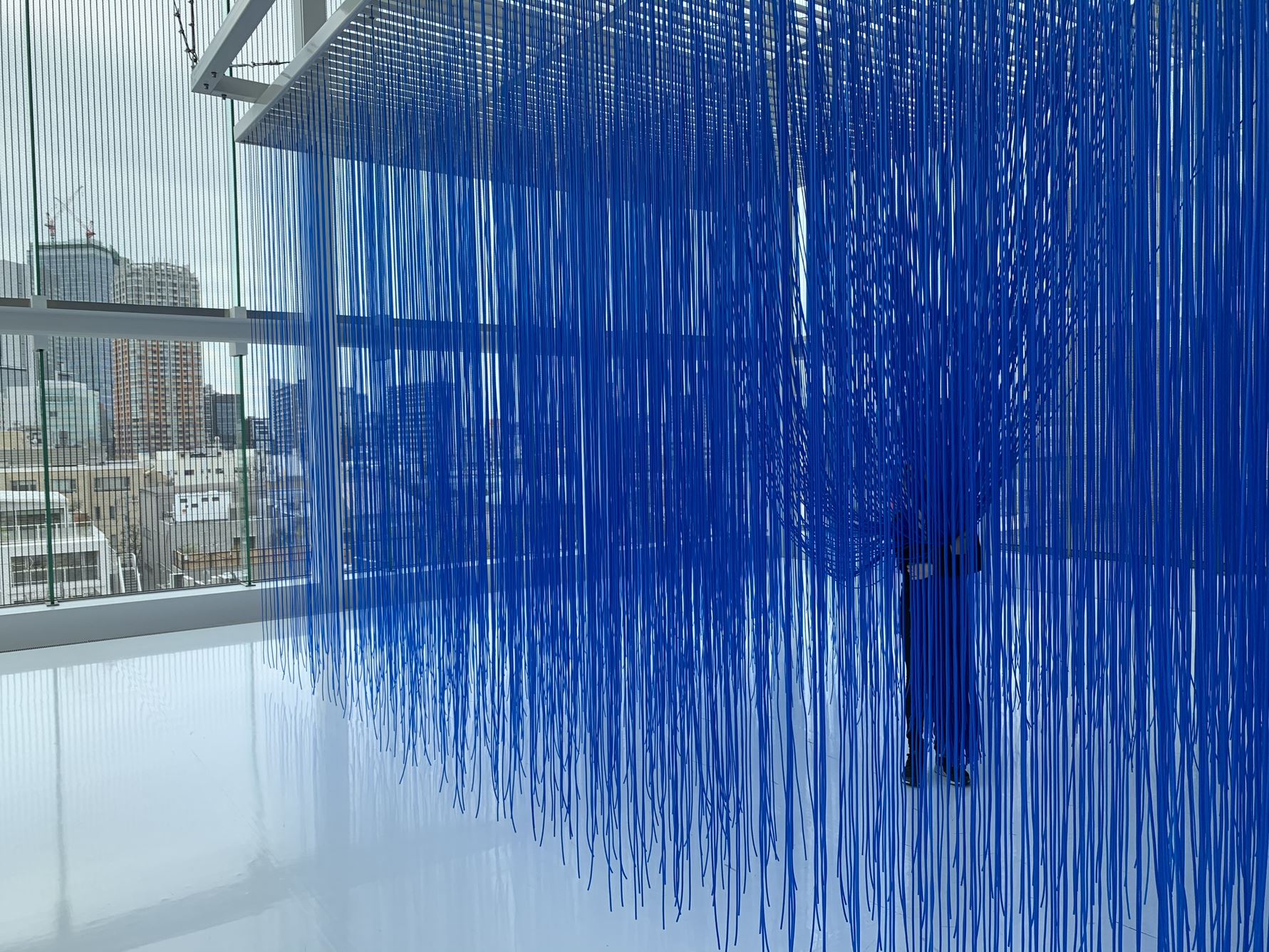 “In Tokyo, most famous fashion houses have set aside spaces on their top floors for art exhibitions. A particularly stunning venue is Espace Louis Vuitton Tokyo, which looks out over the well-to-do neighbourhoods of Harajuku and Aoyama. One time, I met with a stunning installation by Jesus Rafael Soto. The sea of blue was so enticing but we were unsure of whether we could step in or wave a hand through it. Once I got the okay from the security guards, I spent the next 15 minutes drifting through the surreal threads, totally engrossed. Minutes later, I was back on one of Tokyo’s busiest walking streets, people-watching.”

“Kengo Kuma has overtaken Tadao Ando as Japan’s most famous – and perhaps most prolific – architect. Seeing some of Kengo’s most famous structures might make you think he has a limited palette and particular style, but if you delve in to his work, the variety is simply astounding!

“One of my favorite Kengo Kuma sites is the Kadokawa Culture Museum in Tokorozawa, on the outskirts of Tokyo. The main building has the presence and strength to seem more like a castle from Game of Thrones than the library, art museum, and history museums that are housed within – but the space is much more than this single building. Across the street, set in a park, is a permanent teamLab exhibit, the Acorn Forest, which comes to life as night draws in; metallic cocoons begin glowing in a rainbow of colours.

“My favourite part about the Kadokawa Culture Museum space, though, is a contemporary shrine that sits off to the side. Glass, running water, and a living torii gate growing with plants turns neon in the nighttime. If you’re wanting to get away from the city centre, this is a fantastic day trip!” 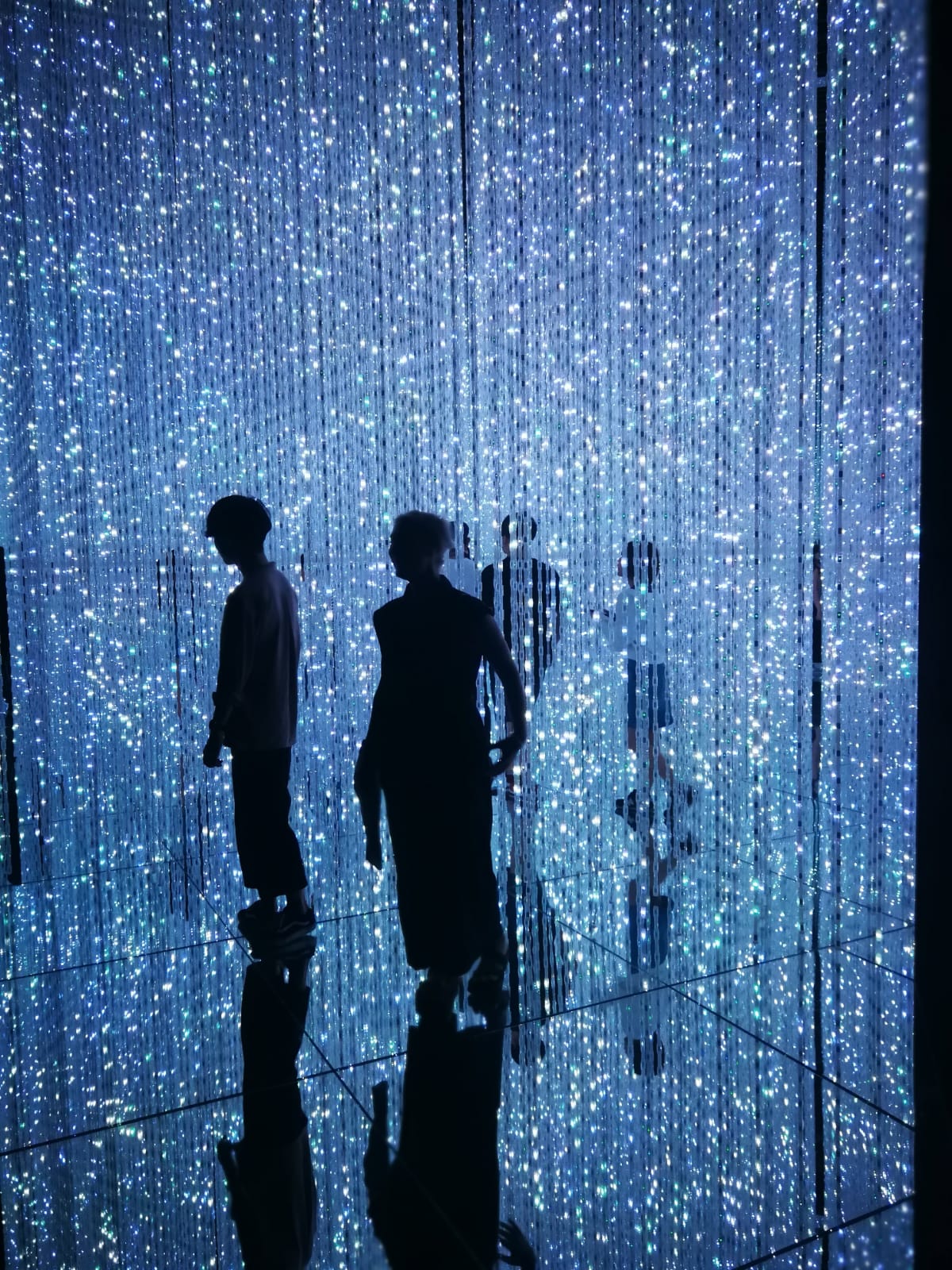 “The Borderless Digital Museum is designed to impress, and I’d seen lots of images on social media of the light projection rooms with waterfalls cascading down the walls – but this room blew me away. Mirrored floors and ceilings created an infinity of lights that you weave between (under-skirt paper bags being handed out for those worried about modesty), with the theme changing from gently falling rain to bright sun. It felt otherworldly. Infinitely modern and yet somehow resonant of nature, too.” 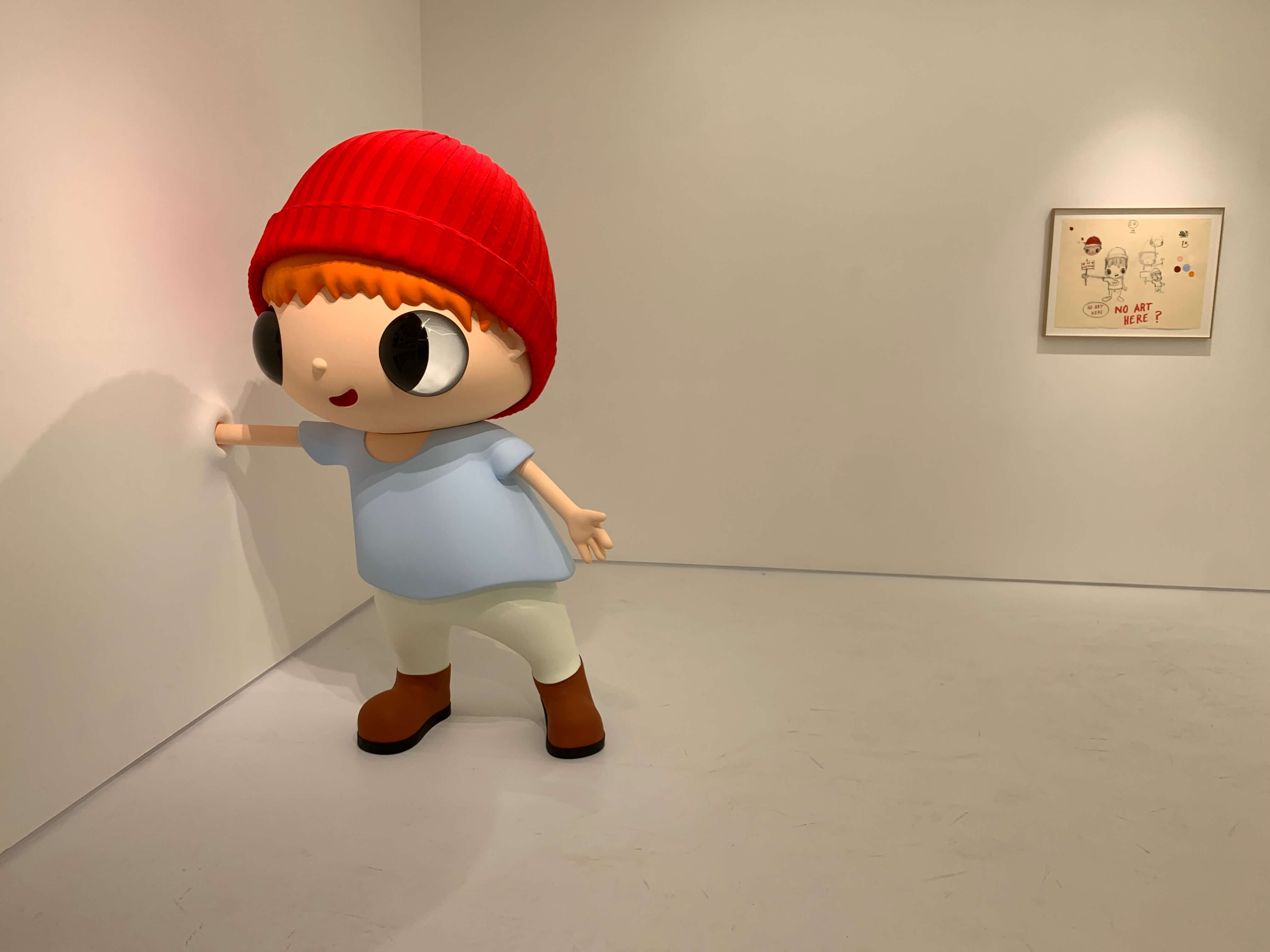 “Like many of the world’s great cities, Tokyo is a tapestry of neighbourhoods. Those for the young, the old, the trendy, the classic, the traditional, the financial, and many more besides. One of the most famous areas is undoubtedly Shibuya. Its pedestrian intersection is unmistakable, in the same way one might think of Big Ben or the Statue of Liberty.

“But in the windy and hilly backstreets of Shibuya is the centre of ‘cool’ in Japan. Aimed at the young, but not too young (ahem, Harajuku), Shibuya houses up-and-coming artists, hidden clubs, late-night cafes, and more fashion than one knows what to do with. Capitalising on the trendy and quick-to-spend consumers roaming these streets is Parco Shibuya: a department store cut from a different, more edgy type of cloth. The shot above is of a fabulous Javier Calleja exhibit at 2G.” 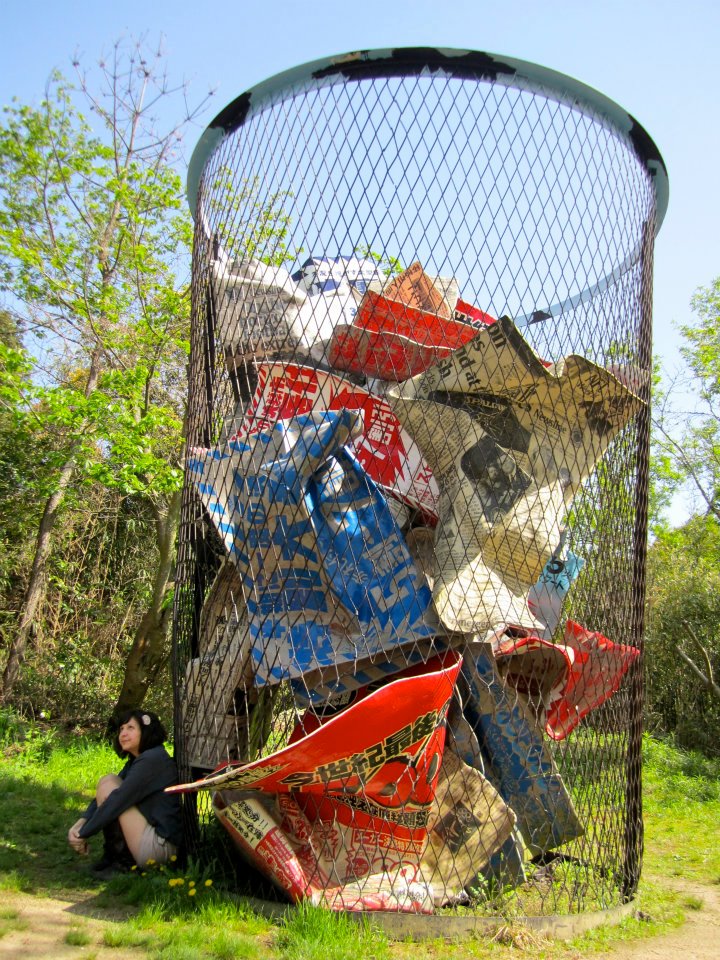 “A seven-minute walk from the Chichu Museum, this Giant Trash Can is a hidden treasure on Naoshima. The buses don’t run on this road, so it’s a special treat for bike riders zooming around the island. I love modern art as it challenges your perspective – and this surreal blend of everyday life and fantasy did just that. I was strangely overwhelmed by its towering size, and as I sat down to orientate myself, I felt a wave of appreciation that I was born human and not an ant. Only Naoshima garbage could evoke humility like that!”

Interested in finding out more about Japanese art? Explore Japan’s art scene on our Japan Arts Trail Self-Guided Adventure, or get in touch to find out more about visiting the Setouchi Arts Triennale.