Skip to content
Thank you for signing up!
Subscribe to our Newsletter
HOME » Blog » The Mystic Onsen of Kinosaki

Shrugging off the day’s stresses in a hot spring bath is a delightful national pastime and a must-do experience. Japan has thousands of onsen across the country, and where the volcanic springs are particularly prevalent, entire spa towns have emerged.

One such place is the peaceful town of Kinosaki Onsen. There, alongside gorgeous sukiya-style Japanese buildings and a willow tree lined canal, you’ll find no less than seven hot spring baths – the earliest of which dates back a head-spinning 1,300 years.

Once you’ve swotted up on your onsen etiquette, here’s what you can expect while strolling through the town in your yukata (a summer robe) attempting the ‘Onsen Meguri’ – an ancient pilgrimage taking you to all seven onsen.

Before science revealed the facts behind natural hot spring waters and their mineral properties, early Kinosaki residents believed that the healing abilities of the onsen came from the power of an ‘onsen guardian’. Before you entered the sacred waters, you had to pray to the guardian at Onsenji Temple to allow you to enter the sacred waters and be healed. In return, you would receive a ‘yu-shaku’, a type of ladle. This would act as proof you’d visited the temple, and could be used as a ticket to enter the onsen. Anyone who did not have this ladle was denied entry.

While the ladle and a visit to the guardian temple are not required today, where better to start your onsen pilgrimage than in the footsteps of the ancients? It’s a short willow-lined walk to Onsenji Temple from the station, followed by a gondola ride or 20-minute hike  and there are still ladles to buy at the top.

After paying your respects to the onsen guardians, the most relaxing and cleanest pilgrimage of your life begins…

Where better to start than the oldest hot spring in Kinosaki? Kouno-yu’s waters are said to bring happiness in your marriage and longevity. Legend tells of its discovery by a villager who spotted a white stork bathing its injured leg. Miraculously healed, the stork took flight and the intrigued villager discovered the hot spring now known as Kouno-yu, or ‘oriental white stork hot spring bath’. The onsen is a quiet bathing sanctuary, set away from the busy streets and surrounded by lush natural surroundings. 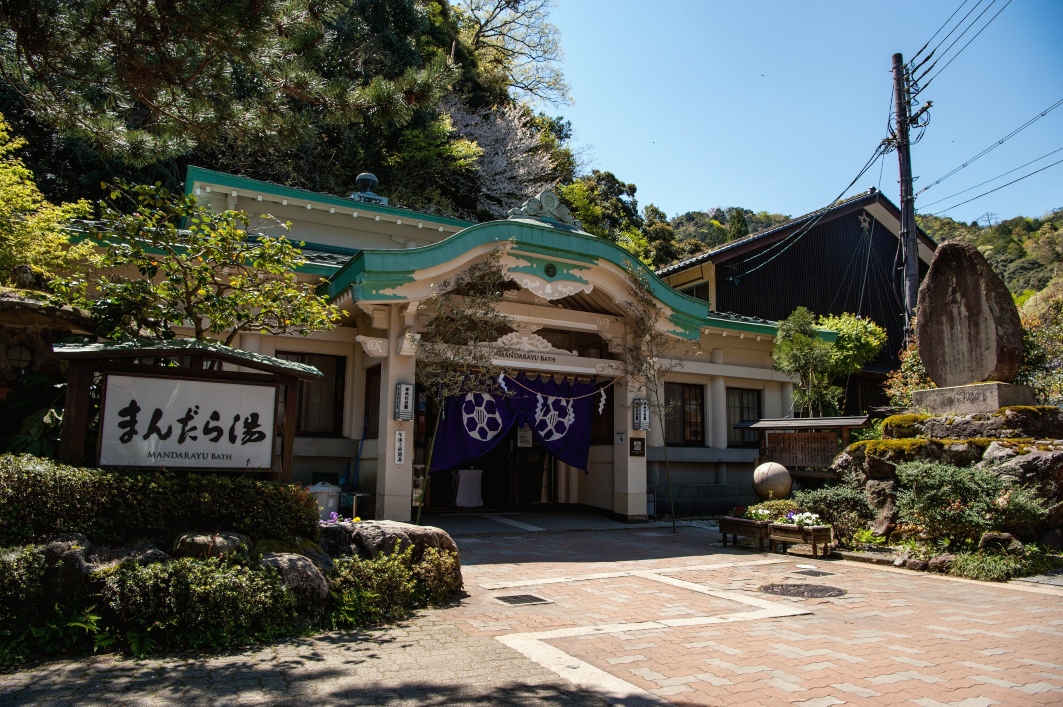 It is said that the waters of Mandara (meaning ‘enlightened mind’) were supposedly brought forth after a holy priest, Douchi Shonin, prayed continually for a thousand days. Along with Kouno-yu, it’s sometimes credited with being Kinosaki’s very first dedicated onsen. A highlight of Mandara-yu is its ceramic barrel baths, which can be enjoyed outside in the fresh air near the mountains.

Your next stop along the Onsen Meguri is Goshono-yu, also known as the ‘Water of Beauty’. This onsen is said to bring luck in love and, in a completely different skill, protect you against fires (maybe just while you are actually in the baths?) Goshono-yu was built in the likeness of Kyoto’s Imperial Palace, with beautifully painted screens and panels daubed with pretty Japanese flowers as you enter.

Ichino-yu’s architectural style resembles that of traditional kabuki theatres and is a popular landmark in Kinosaki. Dubbed as the ‘Number One Bath’ by a well-known doctor of the Edo Period and consequently officially named as such, the bathhouse features a cave made of natural boulders and soft ambient lighting. 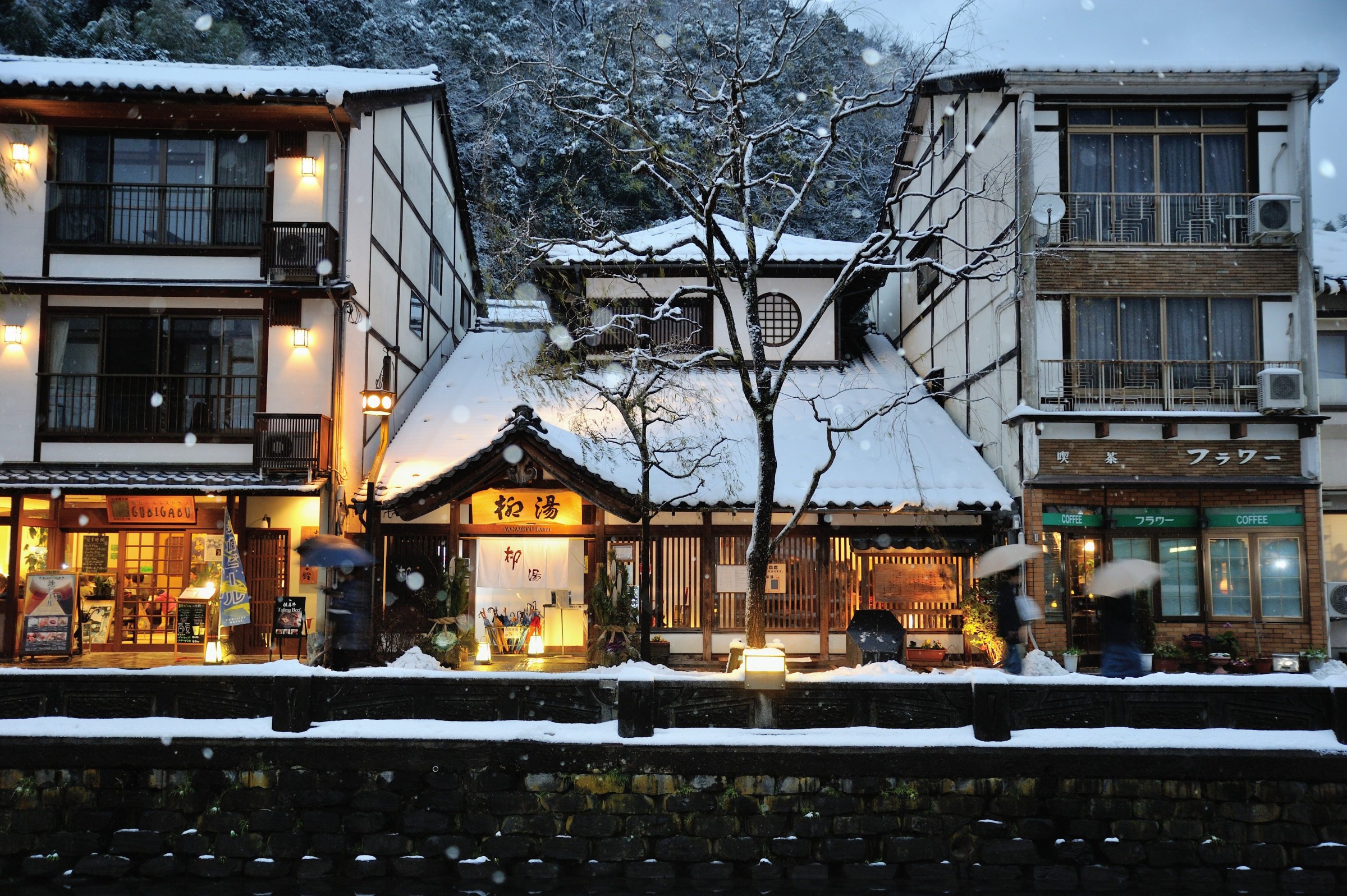 Yanagi-yu is said to ensure fertility and safe childbirth for women. Yanagi is the Japanese name for weeping willow, and this draws its name from the trees that populate the streets in front of the Yanagi-yu. The cosy interior is a classic twist on modern-Japanese style with rustic decor made from cypress wood.

The design of the building was inspired by a Japanese lantern. The hexagonal windows are shaped like the volcanic rock formations of the Genbudo Caves. It is a local favourite with many families from the neighbourhood still preferring to use this retro style bath house to relax before turning in for the night. 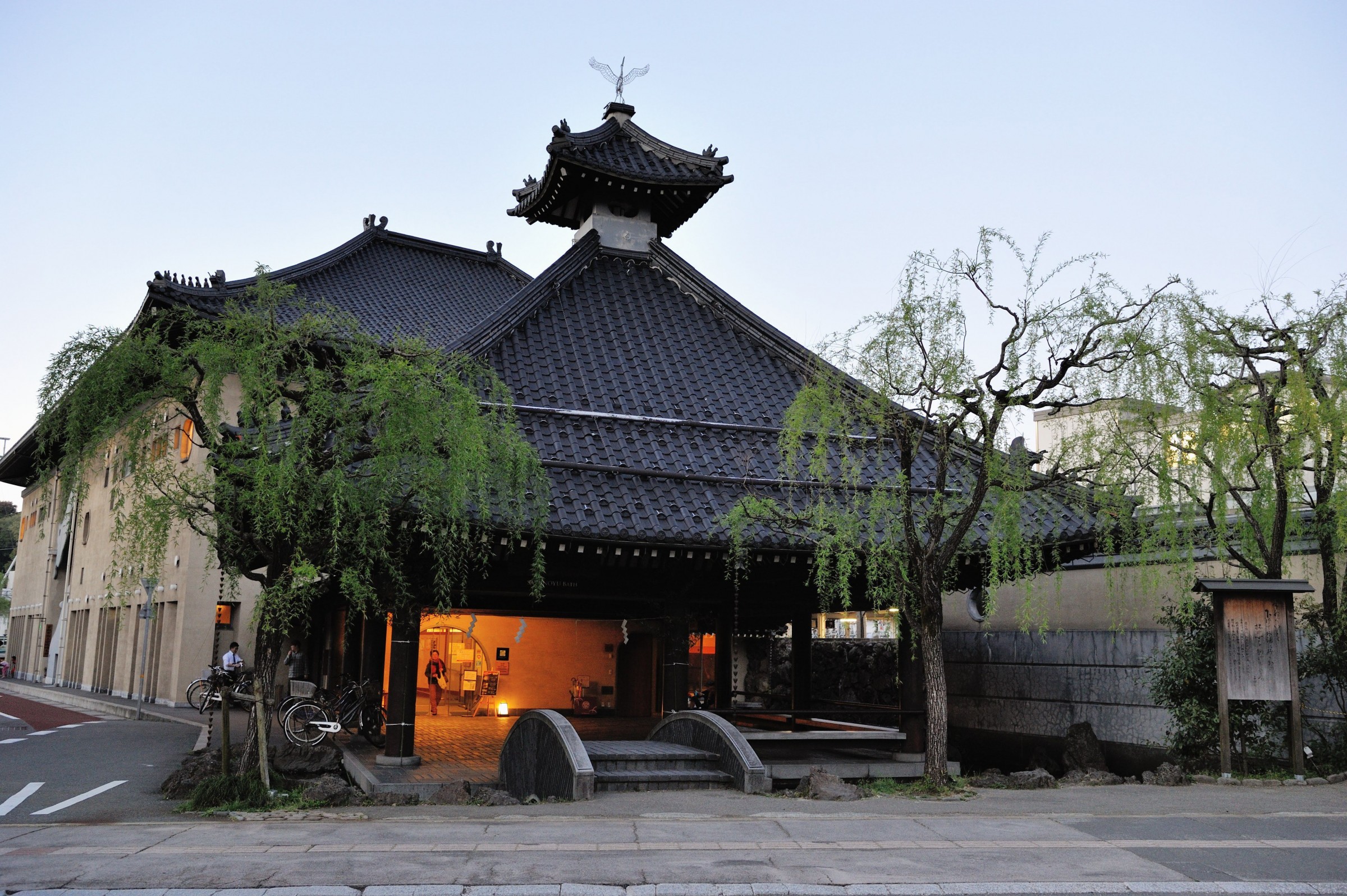 Finally, after a long and relaxing afternoon, finish up at Satono-yu. This onsen features a beautiful panoramic view of the town from its outdoor bath, located on a third-floor observation deck.  Relaxing in the masterfully-designed outdoor baths and enjoying the modern amenities of this onsen is a beautiful way to finish your day of historically-enlighted pampering.