Skip to content
Thank you for signing up!
Subscribe to our Newsletter
HOME » Home » The Japanese giant salamander – a living dinosaur

Senior tour leader, Richard Pearce has travelled the world in search of unique wildlife experiences, but his recent encounter with the Japanese giant salamander left him in awe.

What is a Japanese giant salamander?

In other important ways the Japanese giant salamander is quite the opposite to its iconic and very distant cousins. Being restricted to remote mountain streams and rivers with fast flowing and clear water, it is entirely aquatic and nocturnal. This makes observing them in the wild extremely difficult, even for the initiated, and for the average nature enthusiast, it’s virtually impossible.

Fortunately, there are no elephant-back tours to be found in the mountains of Japan, and the World Wildlife Fund are unlikely to adjust their logo to feature a shy river creature anytime soon. In conservation terms, this means that the measurable trickle-down benefits of ecotourism have not been felt in the Japanese countryside. Additionally, funding for scientific research has been at best limited, and what little is known about the Japanese giant salamander is complemented by the dedication of a handful of local enthusiasts. 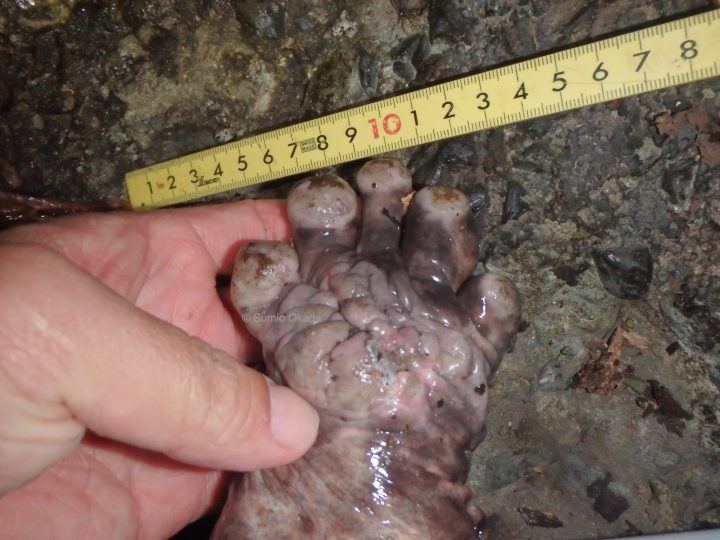 Through a combination of wanderlust, luck and persistence I’ve probably had more than my fair share of memorable wildlife moments. I’ve been face to face with Malayan tapir, Grey wolf, Black-necked spitting cobra and Pygmy lemur. Perhaps the most memorable experience of all happened when I was having a wash in a basic bush camp in the Kruger National Park in South Africa. Keeping an eye out for a whole number of deadly snakes that might need shooing away, something came into my field of vision just a few meters to my right. Much to my utter amazement, it was a small family of African wild dog (Lycaon pictus, formally African hunting dog).

Being in the same space with any rare and exotic creature is always a humbling experience. In those few moments when you become aware of each other’s presence, when you share the same transitory space, time has no meaning. You are merely a bipedal amalgamation of cells on a magical planet circling a yellow dwarf star. It’s beautiful. Being as naked as the being in front of you seems to add another layer to this sense of harmonious co-existence.

Despite my good fortune in the past and the fact that I live deep in the Japanese countryside, I didn’t consider that I’d ever be lucky enough to see Japanese giant salamander in their natural habitat. That was to change one afternoon in late November 2017.

It was during a meeting at my home with two representatives of the Ministry of Environment, charged with promoting the Daisen-Oki National Park. My input was requested regarding an eco-tourism project in the Hino District, possibly involving Japanese giant salamanders. I just about spat out my coffee; not a good idea at all when sat on tatami straw matting. Swallowing hard and just about maintaining the slightest level of cool, I managed an affirmative response in a somewhat high-pitched tone. Fast forward two weeks (the earliest possible chance) and I found myself at the end of a small track deep in the countryside of Nichinan in the Hino District. 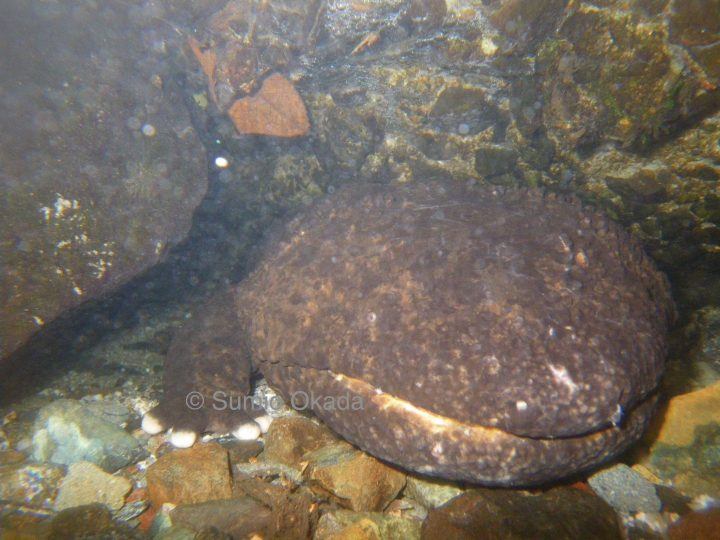 In this part of the world the Japanese giant salamander has been known as the Hanzaki since ancient times. This comes from an old superstition that they have magical regenerative powers; it was believed that a salamander’s body could be zaki (cut) in han (half) and it would still survive. The “Yokai” monster version of the giant salamander was believed to be several meters in length, and would, on occasion, emerge from the water and swallow in one gulp horses, cows and even unfortunate villagers. Standing next to my car and wondering if Google Maps had directed me to the right place, I couldn’t help but feel that I was in a scene from a Studio Ghibli animated movie or a Lafcadio Hearn book, such was the incredible beauty and tranquility of the setting.

In my experience, scientific researchers who spend the majority of their time alone in the field often tend to be somewhat socially awkward individuals. One might consider it an occupational hazard, the consequence of spending countless days and nights with only scientific equipment and notepads for company. Dr Sumio Okada, the world’s leading authority on Japanese giant salamanders is, however, not at all like this. A warm and welcoming character, Okada-sensei has the undervalued skill of sharing his passion and knowledge of his study matter in an interesting and informative way.

A short distance from Dr Okada’s research headquarters, a modest and aging Japanese-style house, is an upstream section of the Hino River. Dressed in waist-high waders, we entered the crystal clear water, glistening in the late afternoon sunlight. We spent the following 30 minutes tentatively feeling under rocks for anything that felt unlike plant or mineral. Then, suddenly, something – my heart skipped a beat – as a smooth mass of musculature slipped over my open hand and into some submerged vegetation. In a flash, Okada-sensei expertly scooped the salamander into a net. At just under 40 centimeters long, it was probably 30 years old. A youngster! After taking some basic measurements, the impressive creature was gently released, taking an abrupt turn to make its way directly through my legs, via a slight deviation as it brushed against my right boot. 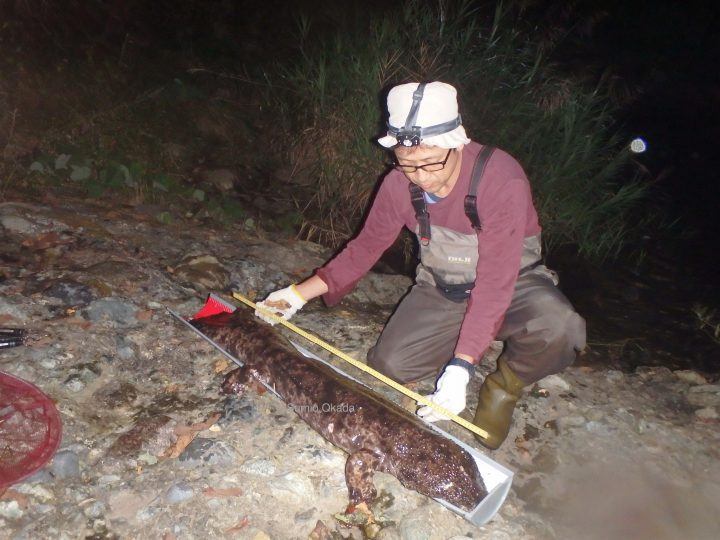 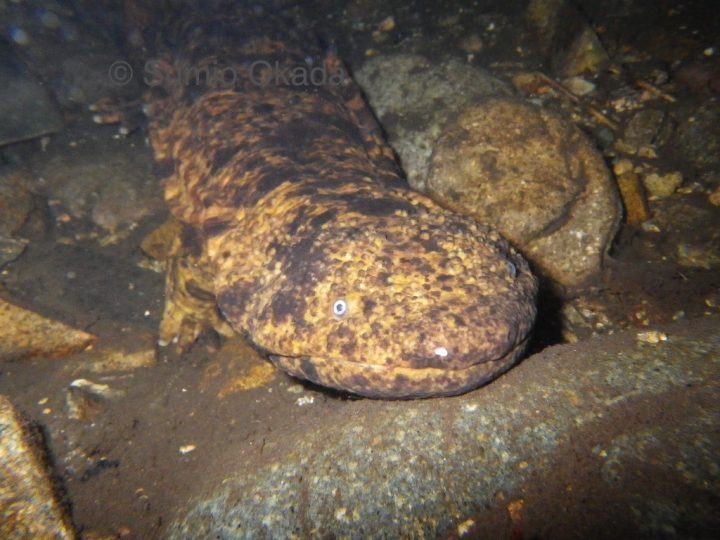 The scientist in me tells me that it was a random act with no specific meaning, my rubber clad leg being no different to any other object in the river. The romantic and spiritual side of me registered it as a special moment. Either way, the result was the same, in both a literal and non-literal sense, this experience with the hanzaki touched me deeply. I made a vow to myself that from that moment on I would do my very best to support Dr. Okada in his efforts to research and protect the Japanese giant salamander, by putting together an ethical and sustainable project that introduces them to the outside world.

Later that evening, after productive talks over a delicious dinner at a local restaurant, we headed a little further downstream to a wider stretch of river. Equipped with surveying equipment, waders, and a head torch, we shimmied down a bank and began to look for giant salamanders under a road bridge. Before long Okada-sensei had managed to locate a large specimen half hidden under a sizeable rock. We quickly set to work measuring, weighing and identifying. At 83cm, this salamander was around 60 years old. With a couple of missing digits on its front left leg, it bore the scars of fierce battles.

Taking tourists to search for the Japanese giant salamander

As I watched it return to its preferred hiding spot, I was filled with a sense of privilege. Privileged to be in the company of this mysterious river creature, privileged to be in this remote corner of Japan, and privileged to be learning from such an authority as Dr. Okada. It therefore fills me with pride to be able to offer an opportunity to similarly intrepid and curious nature enthusiasts to embark on a very special guided journey into the lair of the Japanese giant salamander.

Go in search of the elusive salamander on our brand new Japanese Giant Salamander Conservation experience.