Skip to content
Thank you for signing up!
Subscribe to our Newsletter
HOME » Blog » 5 reasons to visit Tokushima’s Awa Odori Festival

In August, Tokushima’s sleepy streets come alive with the bright lights, live music and general revelry of the Awa Odori Festival. While summer is the season for festivals across the country, this one is pretty darn special. Travel consultant Lucy braced herself for the festivities.

Every August, the sleepy prefecture of Tokushima celebrates the Japanese period of Obon with the Awa Odori Festival, one of the largest dance festivals in the world. Attracting over a million visitors every year, preparations begin months in advance. From as early as April, groups of young dancers can be found practicing in parks around the city with the familiar music ringing out late into the night.

Sadly, Tokushima is often overlooked by visitors to Japan. Here are five reasons why this unforgettable festival should be part of your Japan plans in August 2018. 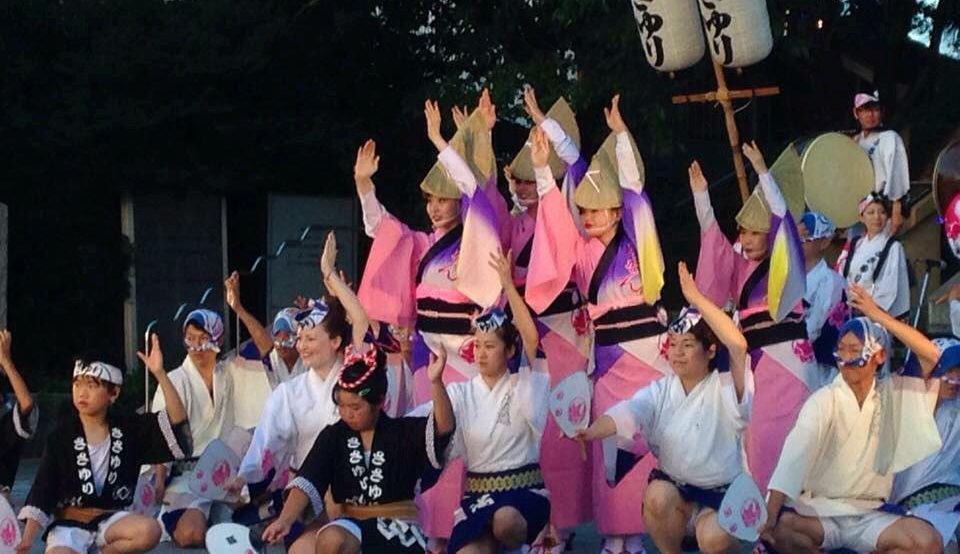 The excitement begins before you even arrive in Tokushima! Whether you’re travelling by train, bus, or ferry, chances are that you will pass dancers and musicians making their way to the city; all dressed up in extravagant costumes. Stepping into the streets, you’ll soon spot groups of the t Awa Odori Festival dancers – known as ren – already getting started.

These are just hints of what is to come after dark! Enormous stages are set up throughout the streets and on floating stages in the river. Smaller, informal stages line the downtown area in preparation for the evening. The excitement of the dancers and musicians is infectious, particularly as the musicians speed up to keep the dancers – quite literally – on their toes!

It won’t be long before you’re dancing through the streets amongst the spontaneous performances downtown.

If watching thousands of yukata-clad dancers make their way in unison through a city to the beat of thundering drums wasn’t on your ‘must-see’ list, it should be! Each group has their own individual chant, and two dance group often compete for the loudest chants and the fastest dancing. You may find yourself joining in with the sporadic, “YATTOSA YATTOSA” throughout the festival!

The longest stages are hundreds of metres long; grab a tiered seat above to get some of the best views.

The best dancers make the fast movements appear effortless; this becomes even more impressive when you spot the women’s formidably high wooden shoes. The yukatas are made up of over four layers, and tied tightly with intricately knotted obi; combined with the summer heat and humidity, the hours of dancing provide quite the workout!

Although men aren’t quite so restricted, their dances require low movements with leaps, jumps, and everything in between. You can bet there are some burning muscles at the end of the longest stages. With rens coming from all over Japan, performances are the result of hours and hours of practice (usually at the expense of a few toenails).

The areas outside of the main stages play host to more informal dances where audience participation is encouraged. Don’t be shy to get involved!

Music makes up the very heart of the festival, and every ren has its own musicians playing drums, shamisen, Japanese flutes and more. The music dictates the pace of the dance and it often seems to reach impossible speeds! Each group has regional variations, and the more modern rely on drums. Some of these can weigh up to 35kg, take a look at the drummers’ expressions as they keep up the formidable pace – it certainly takes its toll on their forearms!

5) The motto at the heart of the Awa Odori Festival

Finally, it is the motto at the very heart of the festival that I think makes Awa Odori so special, so we’ll end with this:

If you’re ready to get into the spirit of the ren, plan a trip to Tokushima on our Secrets of Shikoku self-guided itinerary.