Skip to content
Thank you for signing up!
Subscribe to our Newsletter
HOME » Home » A journey from Takayama to Kyoto

As a tour leader for InsideJapan Tours, I spend most of the year on the road around Japan leading our small group tours all over this fantastic country. But aside from that hugely enjoyable aspect of my work, one of the great pleasures of this job is the occasional chance to travel to new areas to research destinations and experiences for new potential tours.

In January this year, I accompanied Kazunori Ukisu (known as Ukky-san to his friends!), an expert cycling guide from Gifu prefecture, on a four-day trip along the old Nakasendo road between Takayama and my home city of Kyoto. The Nakasendo was one of five roads that connected Edo (now Tokyo) and Kyoto (then the capital city) during the Edo period (1603–1868).

Although this journey would usually take around eight days by bike, for reasons of time (and plentiful snow!) we travelled the route mainly by car, as the principal purpose of this trip was to check out the route and the sites along the way. We visited some great sights and passed through some lovely scenery, which I want to share with you in this photo blog. Off we go!

We started our journey north of the Nakasendo road itself in the charming city Takayama, already a destination on many of our self-guided itineraries and small group tours. The small city is famous for its beautifully preserved old merchant quarter, with long streets of wooden buildings housing sake breweries and craft shops. Already well familiar with Takayama, we set off towards the hot spring resort town of Gero, passing some lovely snowy scenery along the way.

Not far from Gero, we paid a visit to the Kashimo Meijiza kabuki theatre, a beautifully preserved wooden building constructed in 1894. Gifu prefecture is famous for ‘ji-kabuki’, which is kabuki performed by amateurs, in contrast to the professional ‘o-kabuki’ performed by famous actors in larger cities such as Tokyo and Kyoto.

One other big difference between the two styles of performance is that in ‘ji-kabuki’ both male and female actors perform, as opposed to an all-male cast in ‘o-kabuki’. Unfortunately, performances at Meijiza are quite infrequent, although when performances are not taking place it’s possible to tour the building itself, including the backstage areas.

We finished our first day with a visit to the ruins of Naegi Castle, just outside the city of Nakatsugawa. Although very little remains of the castle itself, aside from some very impressive stone walls, as the castle ruins are located on a high hill, there were some great views to be had as the sun set.

There is a very famous series of ukiyo-e woodblock print pictures by Utagawa Hiroshige, one of Edo-period Japan’s most prolific woodblock print artists. He designed a series of prints based on the entire route of the Nakasendo, with one print for each of the sixty-nine station towns along the way.

In Ena city we visited a very interesting small museum dedicated to Hiroshige. As ukiyo-e prints are very sensitive to light, the exhibitions change very regularly to avoid damaging the prints. The ground floor of the museum hosts the regularly changing exhibitions, while the second floor is home to an experience area, where you can try making your own prints. Great fun!

From Ena we headed to the small town of Iwamura. A delightful little town where the main draw is the chance to visit a sake brewery. Gifu prefecture is one of Japan’s most renowned sake brewing regions thanks to the many mountains nearby which provide crystal clear water, perfect for brewing sake and growing the best rice to make it with.

We finished our second day at Inuyama, where the most famous spot is the castle. Although there are plenty of castles to be found throughout Japan, many of them are modern reconstructions (Osaka castle with its internal elevator is a famous example!). Inuyama castle is one of just twelve original surviving castles in Japan, and it’s a stunning example, sitting perched on a small hill overlooking the river that separates Aichi and Gifu prefectures.

Staying at Mizunowo, a ryokan inn on the Gifu side of the river meant that we had a great view from our room over to the illuminated castle in the evening. We also enjoyed the wonderful onsen hot-spring baths at the inn, with an outdoor bath looking out across the river to the castle.

Also at Mizunowo was one of the biggest breakfasts I have ever been served at a ryokan. We certainly set off with plenty of fuel in our bellies the next morning! 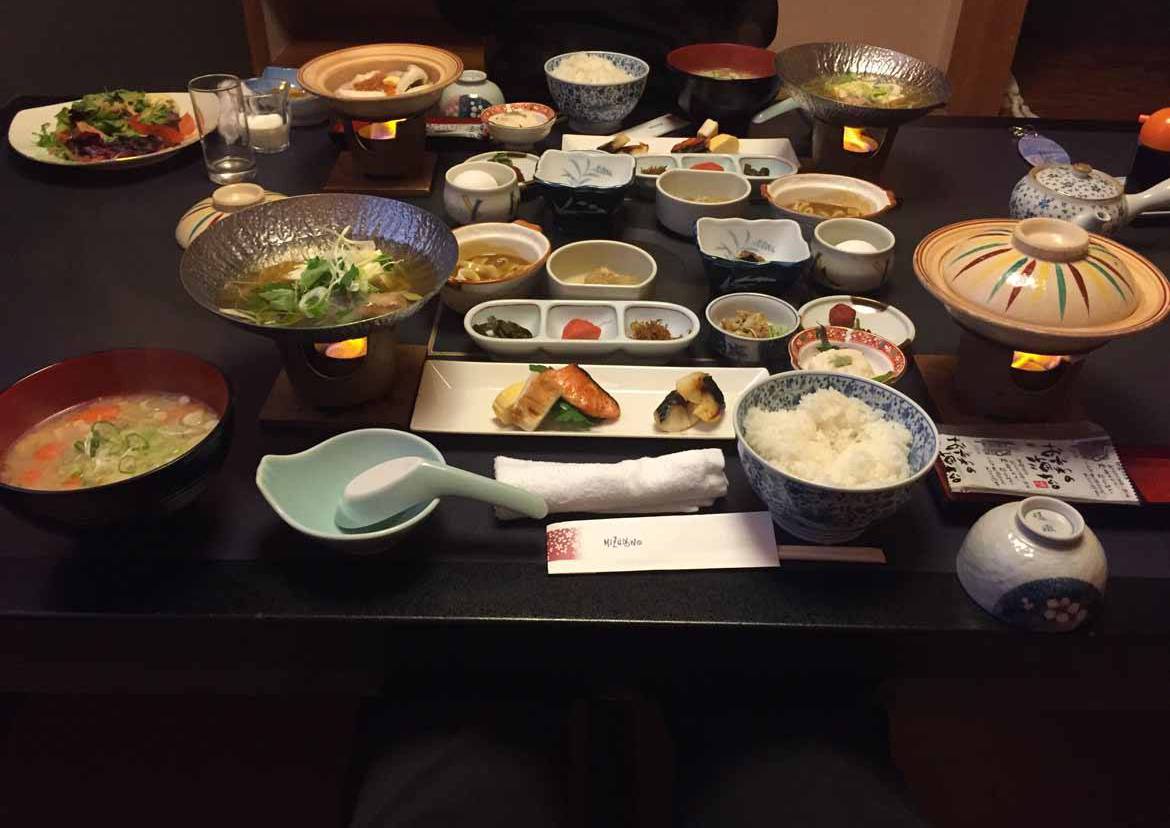 Our route the next morning took us to a pretty quirky part of the journey – Kobeni no Watashi. Kobeni no Watashi is a river crossing operated by Gifu city as part of Highway 173.  Before bridges were constructed across the Nagara River, the only way to cross was by boat, and the city provided this free service as part of the government run highway. Even though there are now two bridges spanning the river just a couple of kilometres apart from each other, the city continues to operate this free service. The man operating the boat said that the service isn’t exactly highly used, and sometimes he doesn’t ferry a single passenger across during a whole day!

We finished our third day at Hikone Castle, another of Japan’s twelve original castles. The castle was looking rather stunning against the clear blue sky and blanketed in white after some recent heavy snowfall.

On our final morning we stopped in Otsu city, just outside our end-goal of Kyoto. I’m a big fan of Otsu, and you can read more about my three favourite reasons for visiting in one of my previous blogs. We visited Mii-dera, one of the largest temple complexes in Japan with great views over Lake Biwa, the largest freshwater lake in Japan.

From Otsu, it wasn’t long before we arrived back in Kyoto. Home-sweet-home for me, but a fairly long trip back to Nakatsugawa for Ukky-san! We finished at the Sanjo Ohashi bridge, the start/end point of the Nakasendo in Kyoto city. We certainly packed a lot in on the way!

Research trips like this one are a great way to search out new and interesting places to include on our group tour itineraries. If this blog has whet your appetite, take a look at some of our existing group tours on our website.