Skip to content
Thank you for signing up!
Subscribe to our Newsletter
HOME » Blog » Hiking Tanigawadake Peak 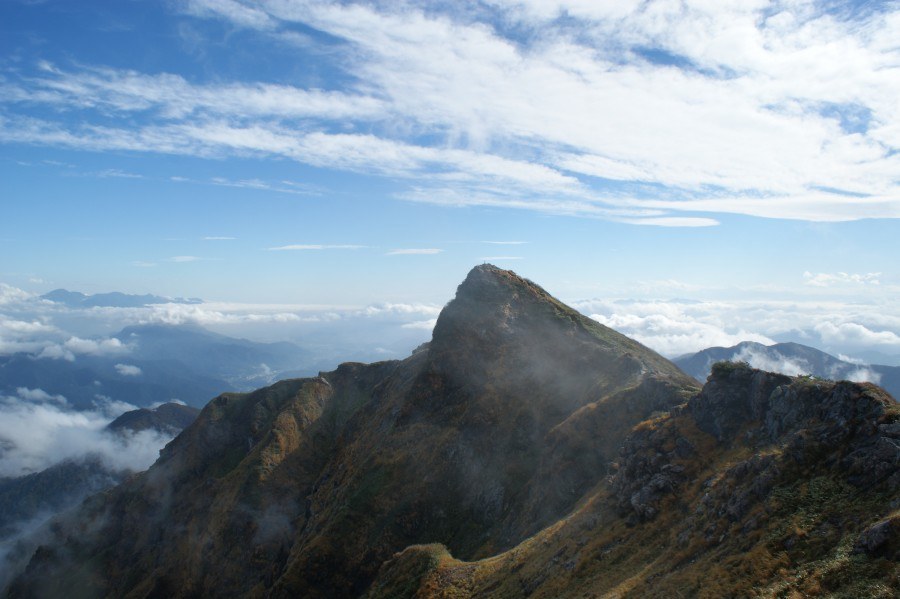 A Clear View on Tanigawadake Peak

If you are looking for a short trip out of Tokyo offering a little adventure and more, I highly recommend the spa and mountainous area of Minakami in Gunma Prefecture, and the chance to scale one of Japan’s 100 great peaks. Although some of the bubble economy years’ ski resorts have long been abandoned and Minakami Spa Town has a somewhat lonely feel to it on a weekday (blissfully quiet for the average Tokyoite), the real attraction of the area is to be found in its rugged natural setting – a haven for rafting, rock climbing and hiking. 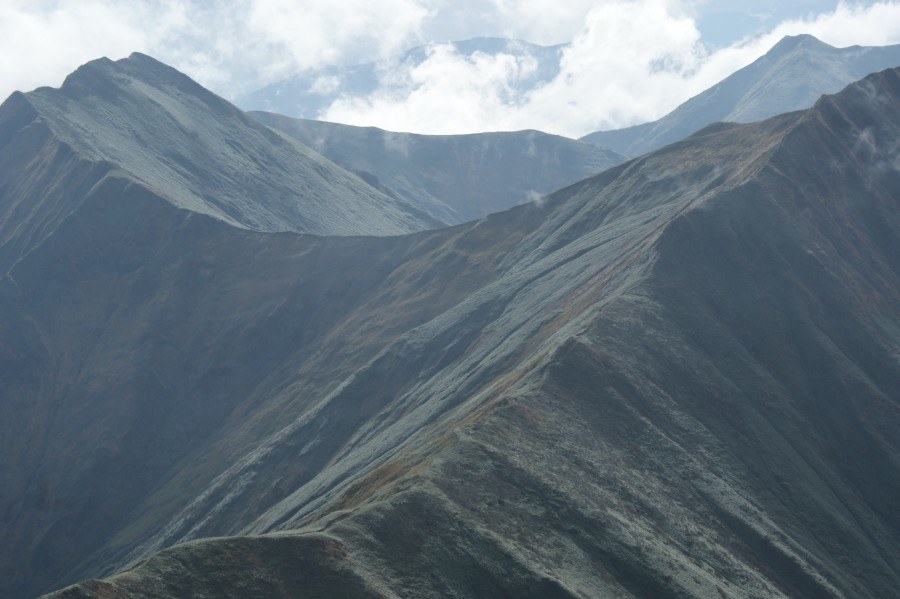 Since first visiting the area some 15 years ago to snowboard at the Tenjindaira Resort, I returned to climb Tanigawa Dake Peak and beyond, with a friend last October. So wonderful was the hiking experience, with more than a fair element of challenge, that I decided to return for a little pre-summer season training before leading our Historic Mountain Trails tour next month. At a mere 1978m, the high point of the trail at Shigekura Peak may not seem much, but the hiking here is truly spectacular, with rocky terrain and stunning ridgelines with some very significant drops on one side – the side you want to avoid! 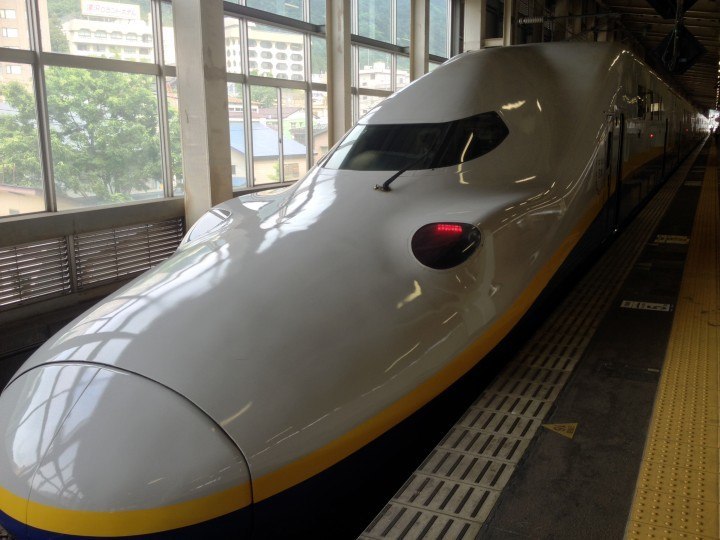 The Tanigawa Max Bullet train – a comfortable start to my day!

I set off at 6am from my Koenji home in west Tokyo and just over 2 and a half hours later found myself, by commuter and bullet train, in the isolated station of Doai, nestled in the green hills of Gunma, from where my hike began. Following the (only) winding tarmac road up to the Tenjindaira Cable Car was an easy 15-minute saunter uphill, which was supposed to then see me cheat on the first section by boarding and taking in the views in comfort. This was not to be though, as the lift was under maintenance – I now had an extra unexpected warm-up hike to the top cable car station – an hour and a half, and 600m of vertical ascent later. 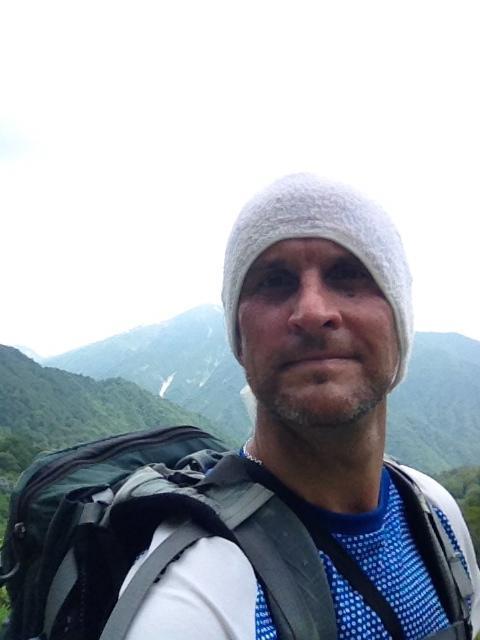 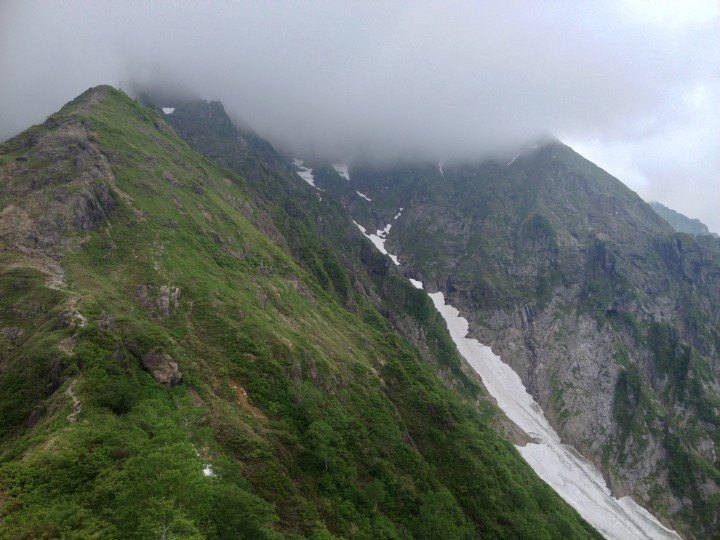 My hike start point had been changed and so my subsequent plan for the day to hike the entire ridgeline over Shigekura then steeply down into Niigata Prefecture was hanging in the balance. I knew I was likely to get wet, given the climb right in the heart of the rainy season, and knew that return transport options were limited. What to do…? 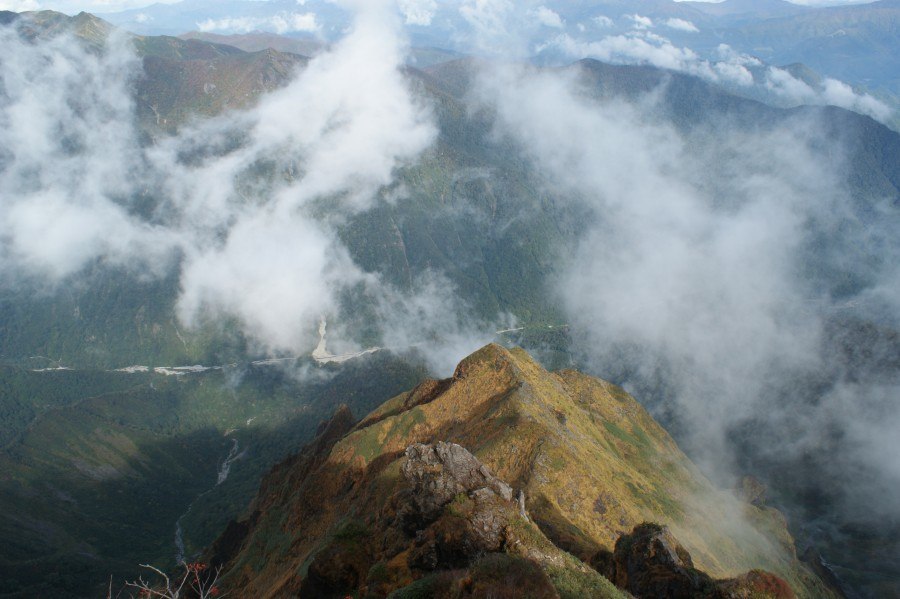 The short route down!

I decided to make the Kata no Goya Mountain hut as my initial target, aware of rumbles of thunder behind me in the distance. Although on the whole, straightforward, this steady 2-hour hike up to the hut requires some focus in parts, with a little scrambling and the assistance of chains. The cloud cover was low but on occasion breaks afforded, in little snippets, glimpses of my spectacular surroundings. After 40 minutes I passed the first of the trail’s emergency huts, a humbling reminder of the force of nature up here, confident that the rumbling of thunder was holding steady in the distance behind me.  I, indeed, was able to make it to the mountain hut in increasingly cooler and damper conditions, having to brace myself against an increasingly strong wind on the exposed higher ground and feeling the chill of the radiating cool rising from the small snow field that lay before my goal. 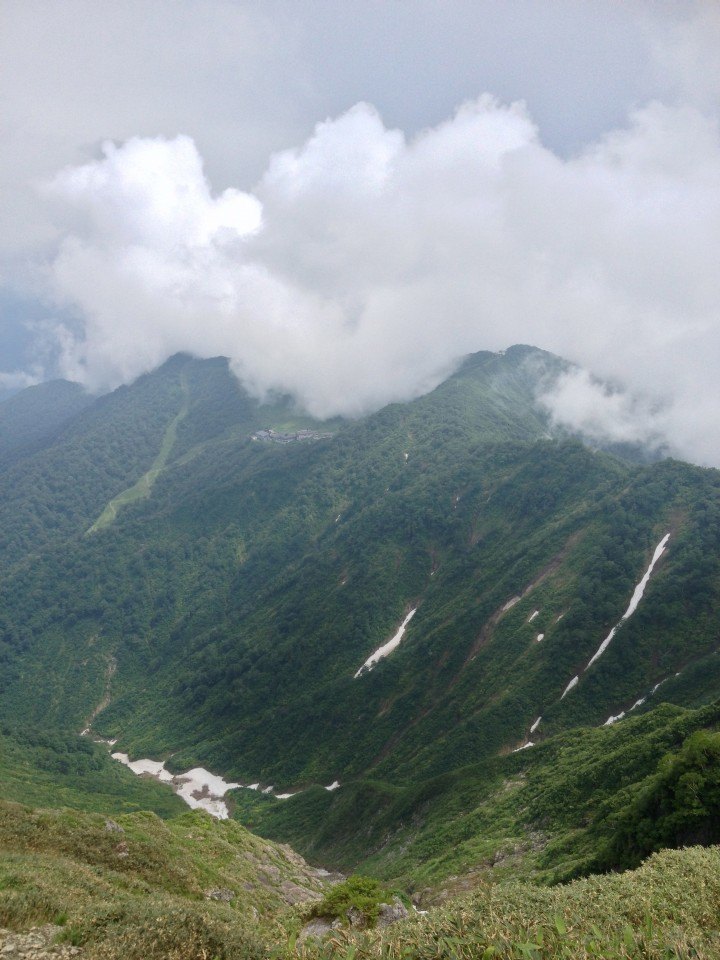 Tenjindaira Cable Car station about to be lost in cloud

Misty, windy, cool conditions in the mountains never fail to remind me of my mortal vulnerability – so the prospect of a little human interaction was a welcoming one. An earthy hut manager by the name of Morishita San, who mans the Tanigawadake accommodation for 40 people from May through to October, prepared me a pot of instant ramen noodles. We chatted about the mountain conditions throughout the seasons – from winters burying the hut in snow, to the electric spring colours attracting hordes of hikers. I so wanted to dig into the noodles, but moreso wanted to glean knowledge of the area from this local expert.

A break in conversation and the (previously hot) warm, salty noodles were slurped down gratefully – perfect for my cooling body that just a couple of hours previous had been leaking profusely due to the warm, humid conditions lower down the mountain.

My decision to shorten my hike and take the descending Nishikuro ridge back down to Doai was sagely backed by Morishita San. On mentioning my original goal, he looked to the hut window and the greyness outside and let out a laconic “so desu ne…”, ie. “I would  strongly suggest that you forget that idea, given the current weather conditions and the imminent forecast for this afternoon”. An exchange of business cards and a restock of chocolate saw me on my way, a little disappointed that I would not repeat the full hike of 10 months ago, but satisfied that my plan B would at least offer a 3-hour descending challenge on a steep ridgeline with some dizzying views.

The slightly wet conditions underfoot and steep nature of the first hour of this trail certainly focused my mind 100percent on the task at hand. The cloud level had lifted, revealing my spectacularly exposed nature on the ridge. I was treated to views of my trail from earlier in the day and could see the track weaving its way along the rocky spine below. A cloud-filtered sunlight gave the (relatively) best photo opportunities of the day and temperatures started to rise once more. Layers of clothing came off as the humidity levels rose, so I felt some relief when the trail ducked into the woods for the last hour, a verdant parasol from the heat above. With the lower slopes and the canopy came the mud, to cake the boots and leave a marker of adventure. I envisaged the trail as a constant stream on rainy days and was thankful that I had managed to avoid inclement conditions

After 3 hours of challenging descending I was satisfied with my 6 and a half hours of total hiking for the day, and my knees were certainly relieved when I met the meandering tarmac road that lead me 10 minutes down to the bottom cable car station. Sat on a bench, relieved of my pack, I scanned the hills above and reflected on the hike, enjoying not caring about the next bus departure – I knew that a hotspring bath, hot meal and a soft futon awaited, but for now, sat on a wooden bench in an empty car park, it was that blissful feeling of satisfying post-hike tiredness that I reveled in.

I knew that I would be back for more in the area soon – hopefully I’ll get to show others this little gem of nature, a relative stone’s throw from the capital.

Below are a few more photos I was lucky to take on my October hike – enjoy – this could be awaiting you! 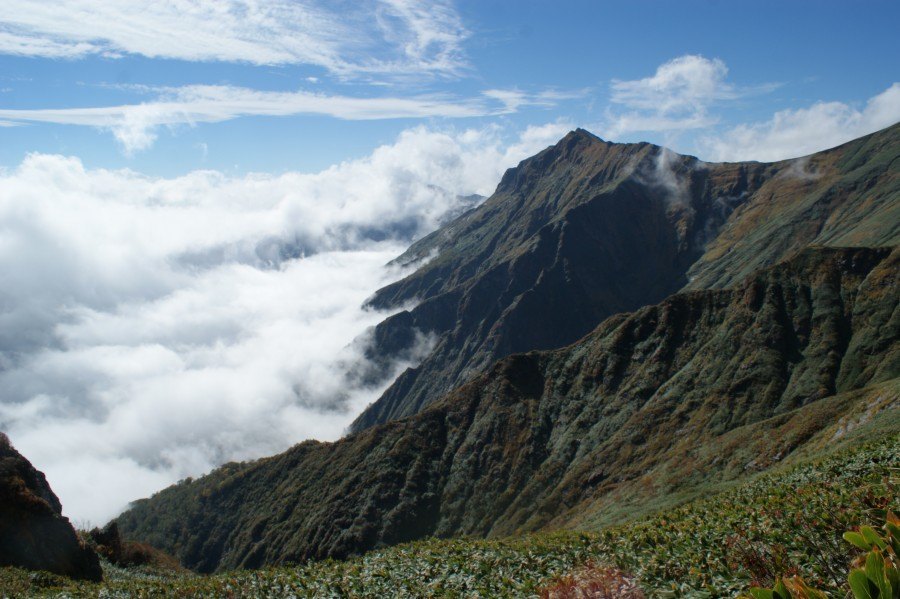 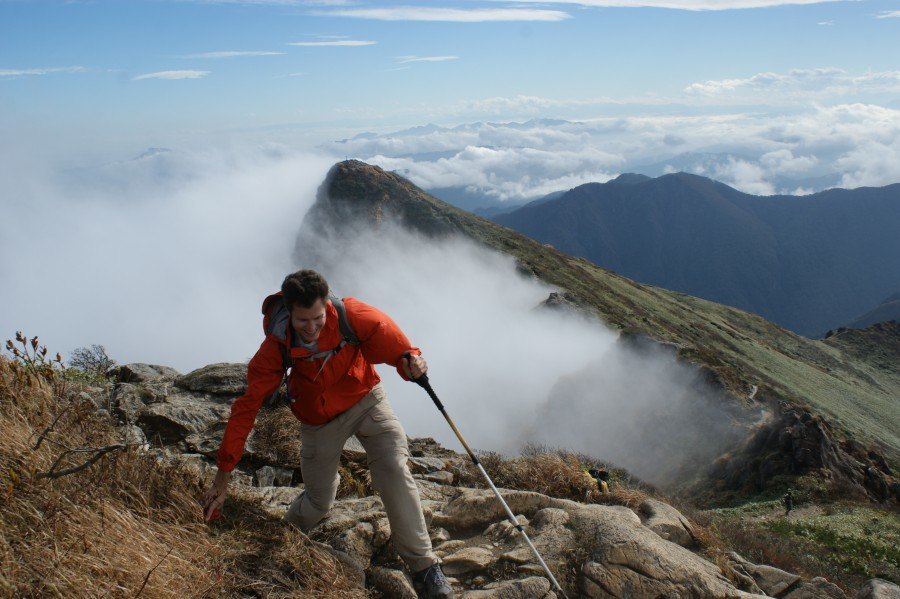 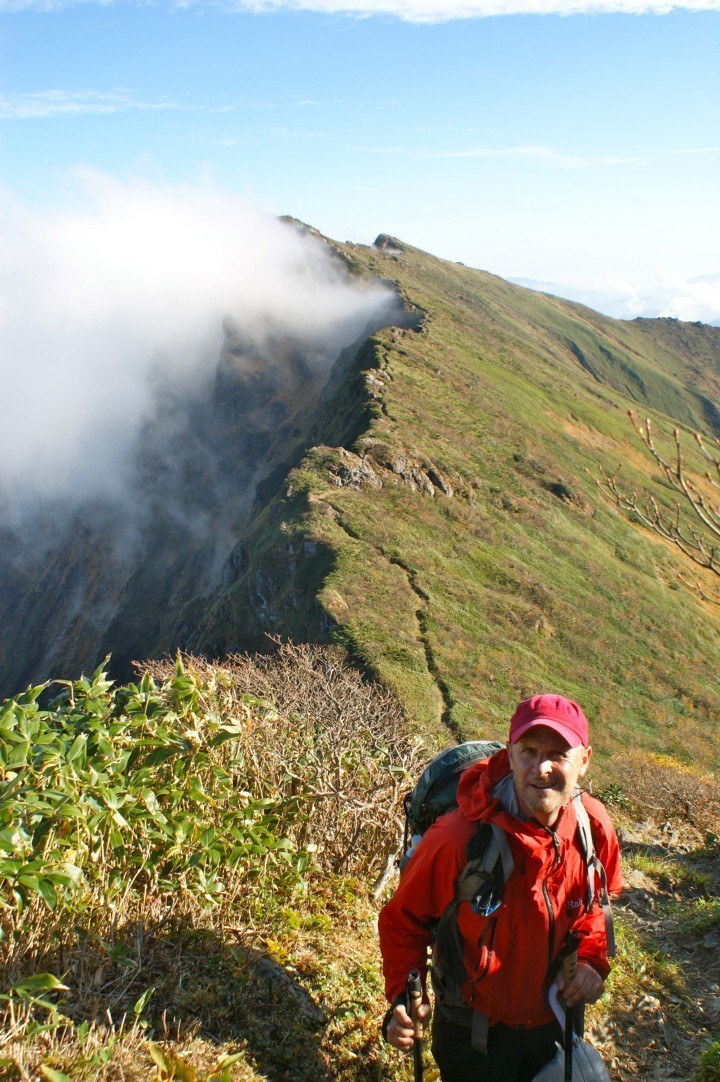 Keep to the right side of the ridge!! 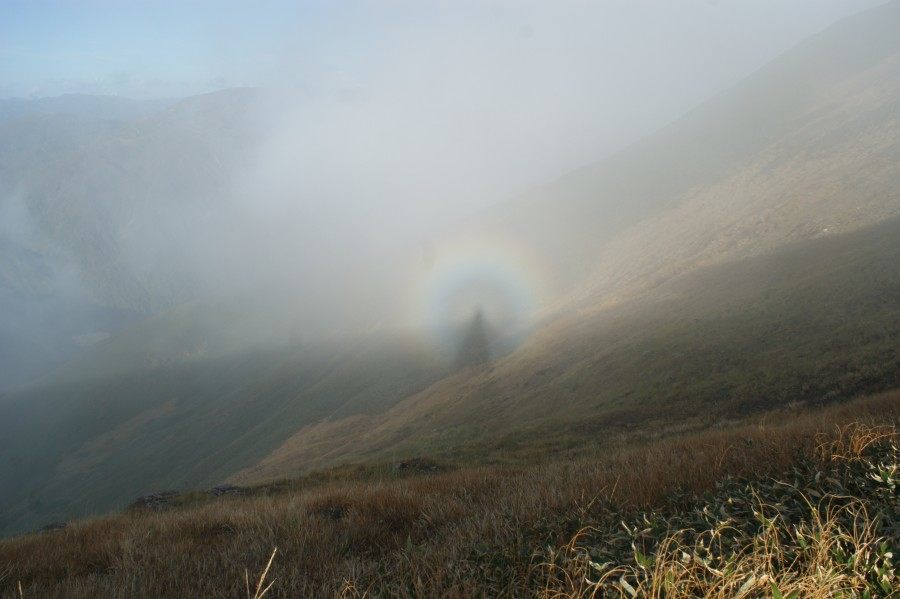 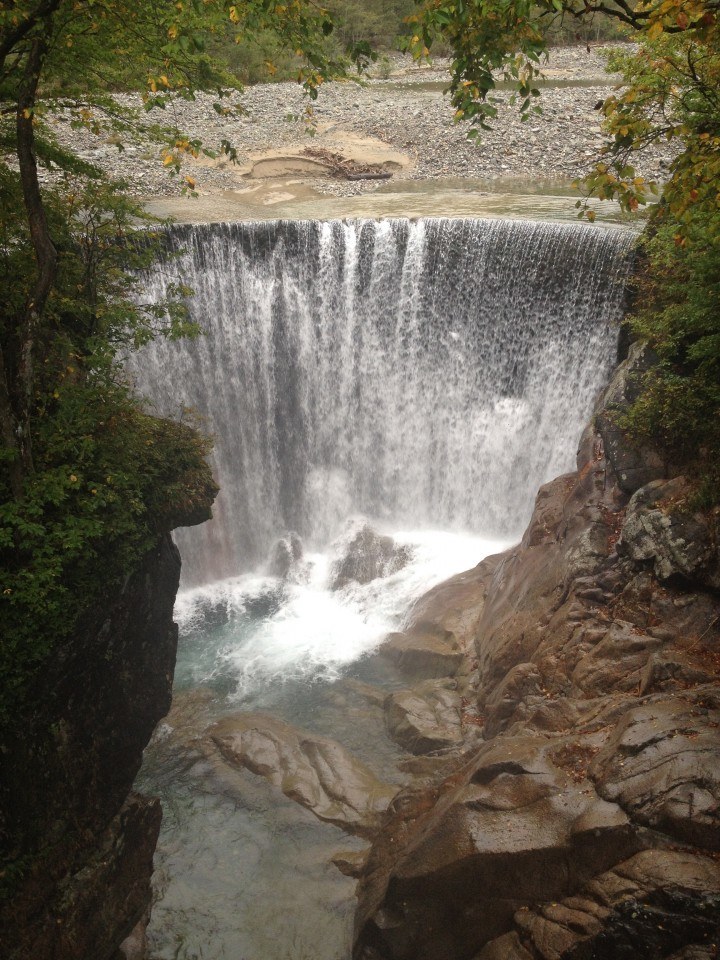 Looking back at the trail from Niigata Prefecture