Skip to content
Thank you for signing up!
Subscribe to our Newsletter
HOME » Blog » Learning to Love the Ocean

Two years on from the great Tohoku earthquake and tsunami, tourism to Japan is back to pre-tsunami levels and InsideJapan Tours are assisting more people than ever in discovering the beautiful culture, countryside and people of Japan. In this anniversary week, the InsideJapan blog will focus on the region looking at how it has recovered, the charities that have made a difference and why tourists are returning to this area of Japan and indeed other areas of the country. The blog pieces are taken from personal experiences of the InsideJapan Tours team in the UK, US and Japan.

Jennifer Snow is one of our tour leaders who volunteered with our chosen charity, Its Not Just Mud. Her piece focuses on her time volunteering and appreciation of the scenery that surrounds the region.

This March 11th marks the second year since the Great East Japan Earthquake and subsequent tsunami, which took over 22,000 lives and led to massive damage in the Tohoku region of Japan. Today I’d like to talk about one of my “lessons learned” volunteering in the region.

When I decided to volunteer in Tohoku’s Ishinomaki, Miyagi prefecture with It’s Not Just Mud (INJM), I tried to not go in with any expectations to begin with, but one thing that I certainly didn’t expect was to learn to appreciate the ocean more from those affected by the tsunami.

One of It’s Not Just Mud’s major projects is to provide small business support to a small fishing village, Funakoshi, an hour and half drive from INJM’s main base. While in comparison to many other towns, few people passed away in the disaster, the village, including the fishing industry, was completely destroyed. Some of the fishermen and their wives formed a sort of collective to rebuild the fishing industry, both through a business venture to create and sell jewelry, with the profits going into rebuilding the industry, and through sharing resources in order to continue fishing to some extent. 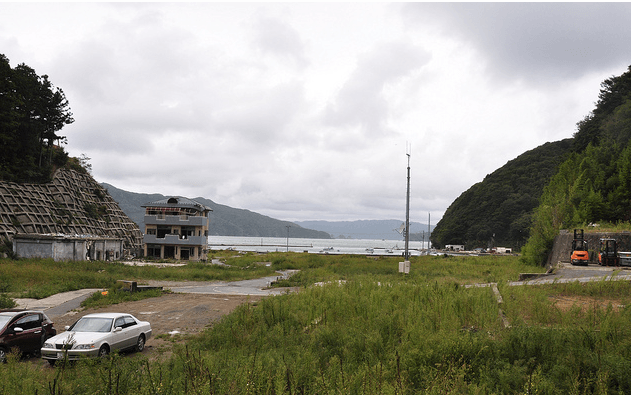 Some weeks I would spend up to 3 days going to Funakoshi to help the fishermen and their wives with these projects, and what I began to notice as I talked to (as much as I could – the older fishermen had a very strong accent called “mumble dialect” that even young people from the area had trouble understanding) and observed the fishermen was that despite everything, they still loved fishing and the ocean, the source of their life’s work. On calm, sunny days when they were able to go out and fish, they were always full of smiles and energetic. When the day was over or they had just finished a task, they would often all stand in a row and look out at the ocean for a while while they talked amongst themselves. I too began enjoying the fantastic views of the ocean on the long drive through the mountains from our base to Funakoshi, and of course the delicious fish and salmon roe that so many people, including the people of Funakoshi, gave us despite us being there to try and help them.

The view on the drive to Funakoshi

Before this, I sort of thought of the ocean as an enemy that I was fighting against by trying to rebuild what it destroyed through the tsunami. What I learned from the people of Funakoshi was that the ocean was and still is an important part of people’s life in the affected area, a source of livelihood and of course nourishment, not just death and destruction. I am incredibly grateful to have been able to learn this lesson.

Recently, thanks to the initiatives of the cooperative, some of the families in Funakoshi have been able to return to their previous jobs and fish independently again. But there is still a lot of work to be done before the people of Funakoshi, and people all over the affected area, can return to a completely normal life. Funakoshi plans to rebuild on higher ground, but this might not be possible until 2014, and many people just can’t afford to rebuild their house.

There is still a lot of work to be done, and I hope everyone remembers the people of Tohoku, those departed and those still with us, this March 11th.

Otsukare sama deshita! Thanks to Jen for this. Although the 2nd anniversary is an important milestone and a chance to move on, it is important to remember that there are still people in Tohoku that do need help. Whilst unskilled volunteer work is not needed to the same levels, there is still a lot of rebuilding that is needed.

Our next blog piece though comes from Ester who volunteered in April 2011 and visited again in 2012 and she demonstrates the positive change in the region through pictures from ‘then and now’.