Skip to content
Thank you for signing up!
Subscribe to our Newsletter
HOME » Home » Naked Japanese Men

Just flicking through the channels last night, I came across the strangely familiar sight of naked Japanese men in nappy-like white loin cloths getting drunk and dancing through the streets. This isn’t an R-rated post, it was just one of the many many Japanese festivals which take place all over Japan throughout the year, allowing the usual somber veneer of the Japanese to be very quickly and very thoroughly stripped away for a night.

Known as Hadaka Matsuri or Naked Man Festival, this particular festival takes place all over the country, usually during the bitter winter months for added machismo. I had the pleasure of witnessing one (not allowed to partake as a woman unfortunately) during my time in Japan and as by many things in the country, was equally bemused and utterly won over. The evening went thus so: Guys got naked(ish), guys ran through streets and jumped around a lot, guys all jump on each other and then are cooled down by a hose, guys charge up the hill to the destination shrine where they jump around more under sprinklers. I had no idea what was going on, but it was a fantastic atmosphere and a great spectacle! 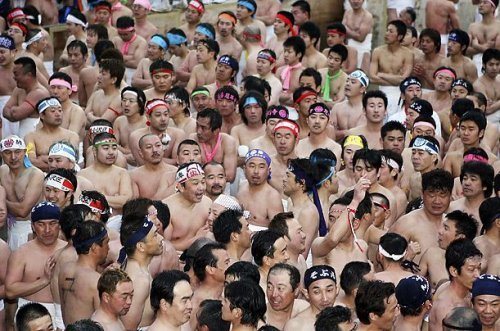 The premise of this programme on BBC was the presenter Stefan Gates immersing himself in ‘some of the most extraordinary feasts and festivals on earth’. This you will certainly find in abundance in Japan. The food we all know about but the festivals in Japan are something else – I can’t even begin to go in to them all here. They seem to happen almost every weekend and you come across them everywhere you go, from tiny little villages in the hills to the centre of the cities. They may not all involve naked men if that’s your thing, but they will usually involve a substantial amount of festival food, a considerable cultural encounter and the best welcome you will receive in a country.

If you are interested in travelling to this festival or any other in Japan, InsideJapan can help you plan the trip. Check out our festival pages.