Skip to content
Thank you for signing up!
Subscribe to our Newsletter
HOME » Home » A Cock and Boob Story

Everyone knows how much the Japanese love their festivals – from the biggest tug-of-war in the world Okinawa to setting an entire mountain on fire in Nara. According to my sources, there are probably about 200,000 festivals held in Japan each year. This seems a reasonable – perhaps even a conservative – estimate if you take into account that there are about 100,000 shrines and temples in Japan and each holds at least 1 festival and up to 70 festivals per year. And that’s not even including all the national and local festivals.

There are naked festivals (Hadaka Matsuri) where thousands of naked men scramble over each other to grab a pair of lucky sticks; snow festivals (Yuki Matsuri) with amazing snow sculptures; a whole bunch of fire festivals (which I wrote about here a few weeks ago); festivals where sumo wrestlers hold up babies to see which one will cry first while priests try to scare them; a belly-button festival in Hokkaido where participants paint faces on their stomachs and hide their heads under giant hats… there is even a festival where a sumo wrestler has a sumo match with the spirit of the rice plant (AKA with himself).

A few weekends ago, I discovered that not only was there a Fertility “penis” Festival happening only a few minutes away by train from Nagoya – but that it was in the very same town as the boob temple I have been meaning to visit ever since I got here! There could be no better reason for combining two types of sexual-organ-themed entertainment in one day, so off I trotted to the unassuming, genitalia-loving town of Komaki.

The blueprint for Japanese festivals is essentially: stuff your face with food from all the stalls that spring up around the temple, mill around for a bit, then watch a parade – and this one was no different. Except that the food was shaped like willies and instead of praying to your standard altar, you were praying to a giant wooden penis.
The parade itself had everything I could have wished for from a penis parade. After the various old men dressed in traditional clothing and throwing salt around the place, there was this guy: 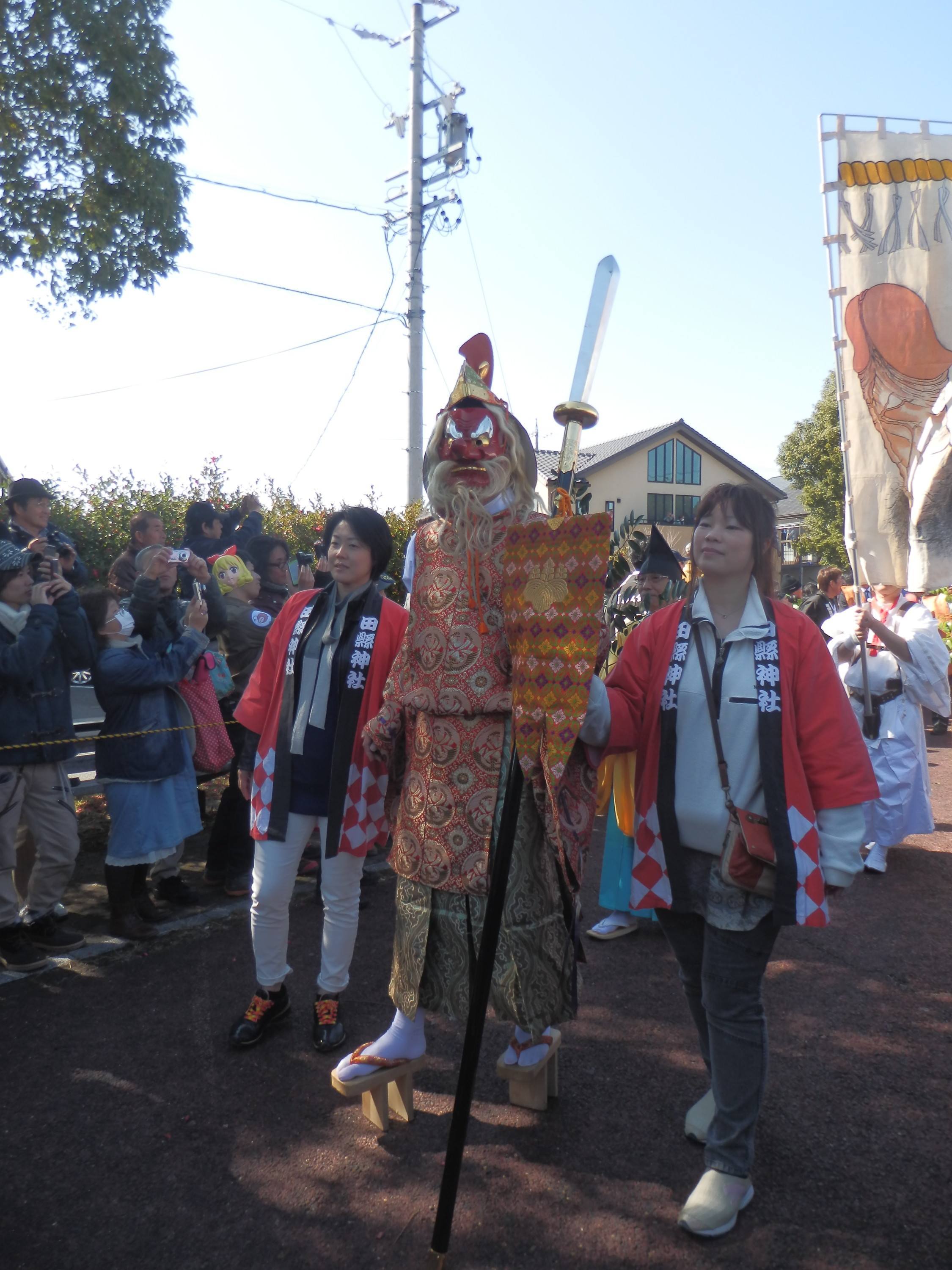 There were young ladies cradling wooden willies and inviting members of the crowd to stroke them for luck: 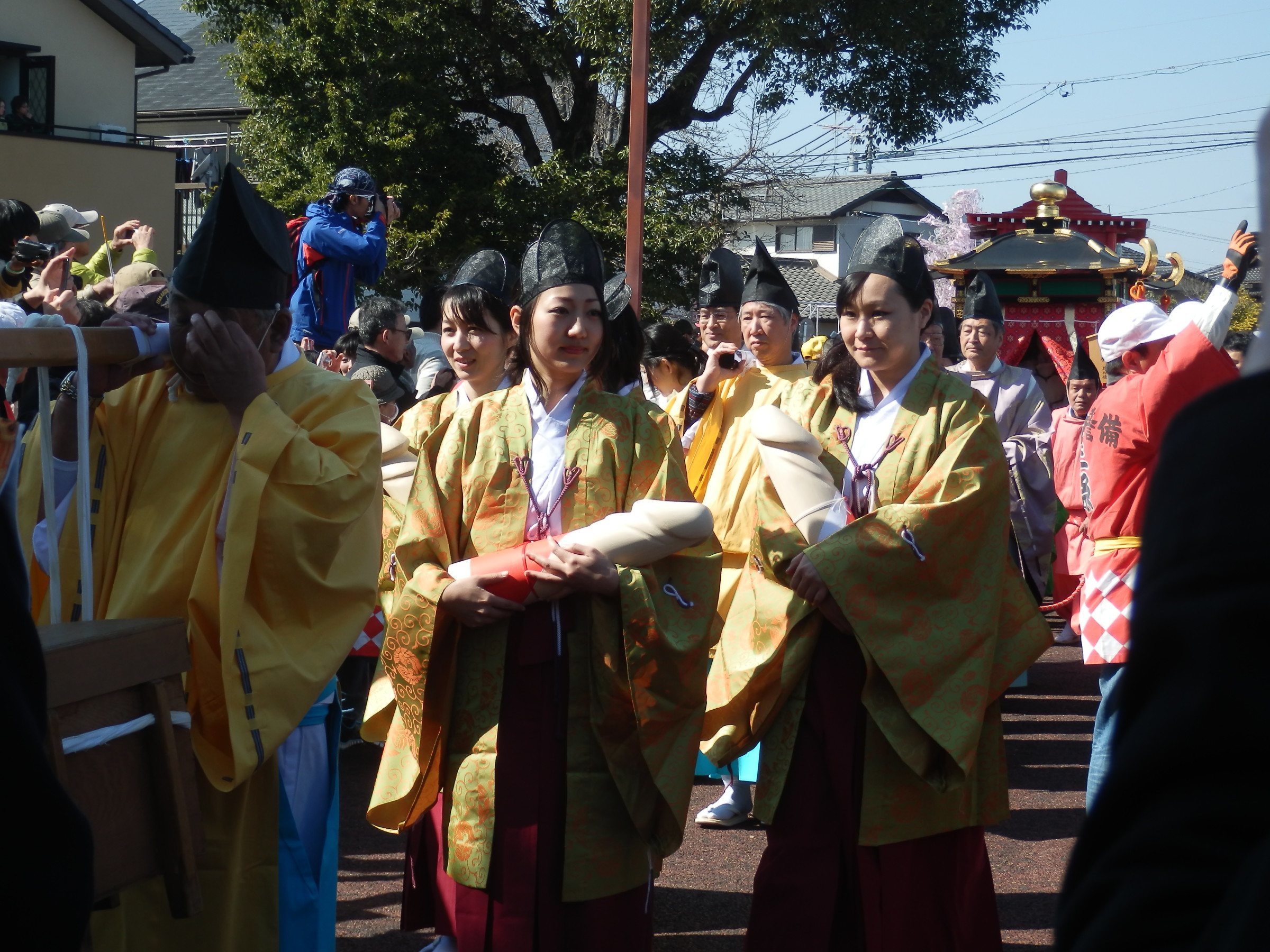 There was this extraordinary banner, slowly undulating in the wind: 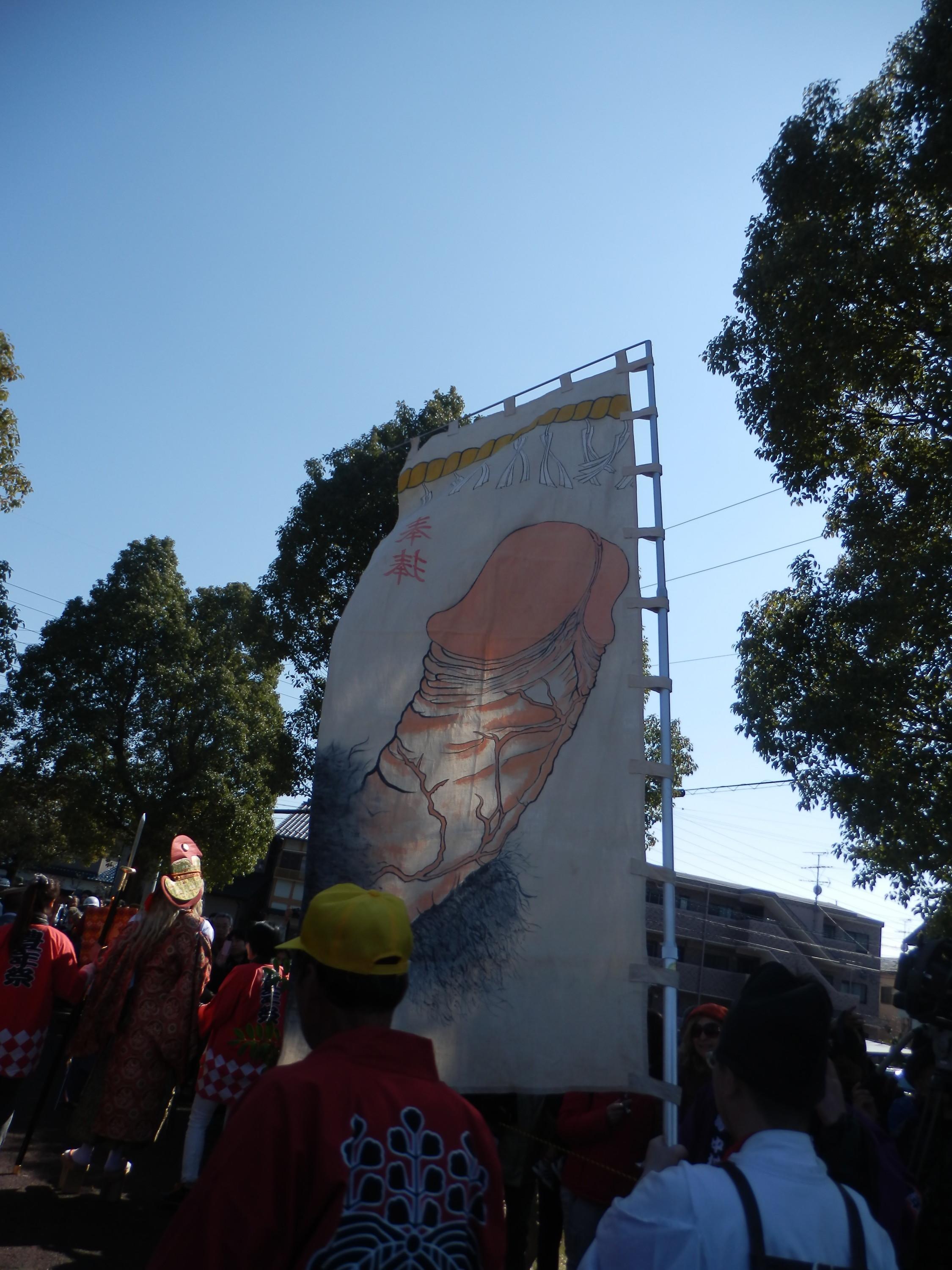 And finally, the piece de resistance, a giant wooden penis being carried in its own portable shrine, which every so often would be swung around wildly on the spot by its bearers: 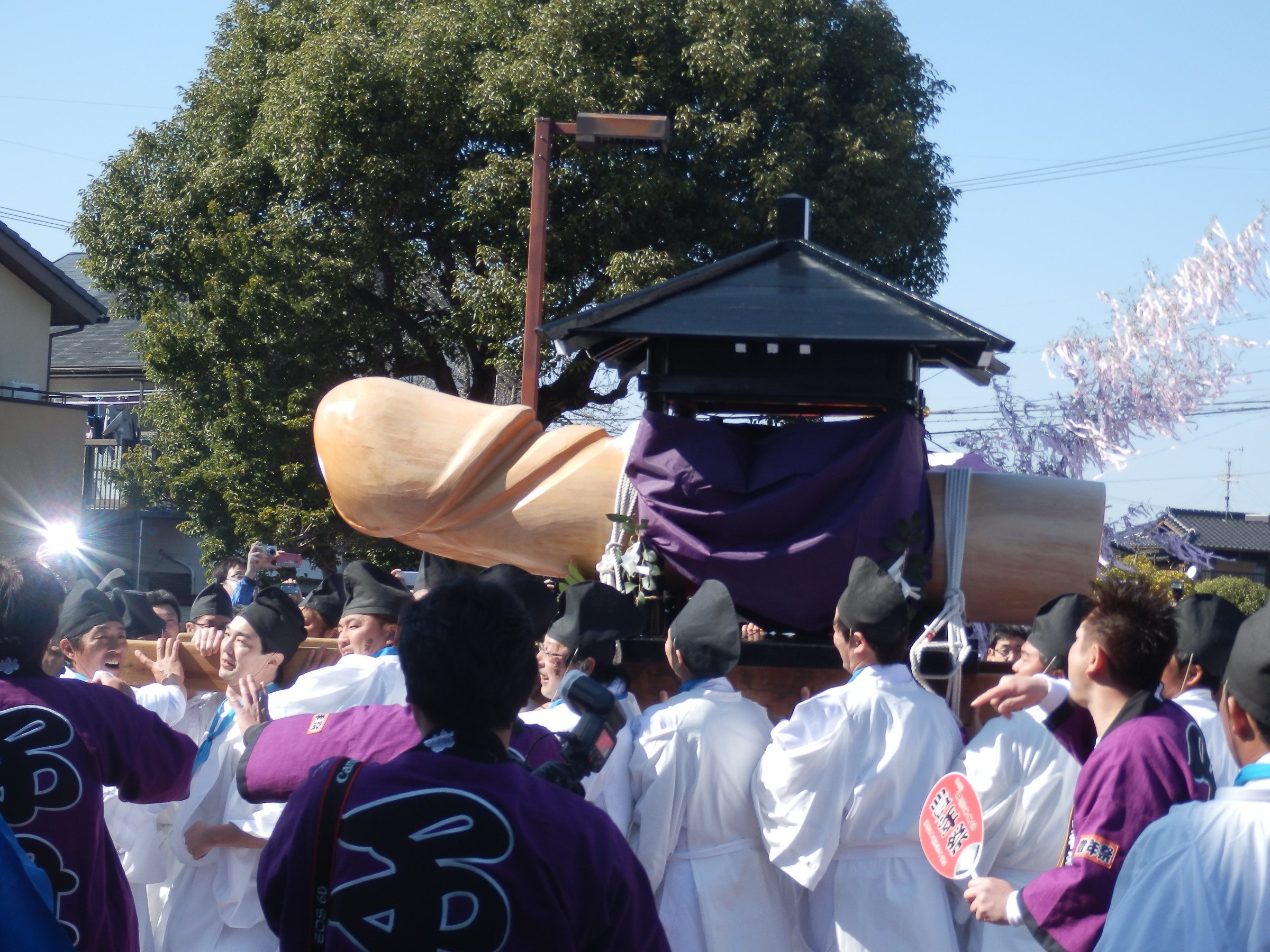 Oh, and there were also people giving out free sake. Perfect.

After all that excitement we still had the Boob Shrine (Mamma Kannon) to look forward to! And this was perhaps even stranger. Anyone who has been to Japan will know that shrines dedicated to penises are really not that unusual, but this appears to be the only temple in the whole of Japan that is dedicated to the humble woman’s breasts. 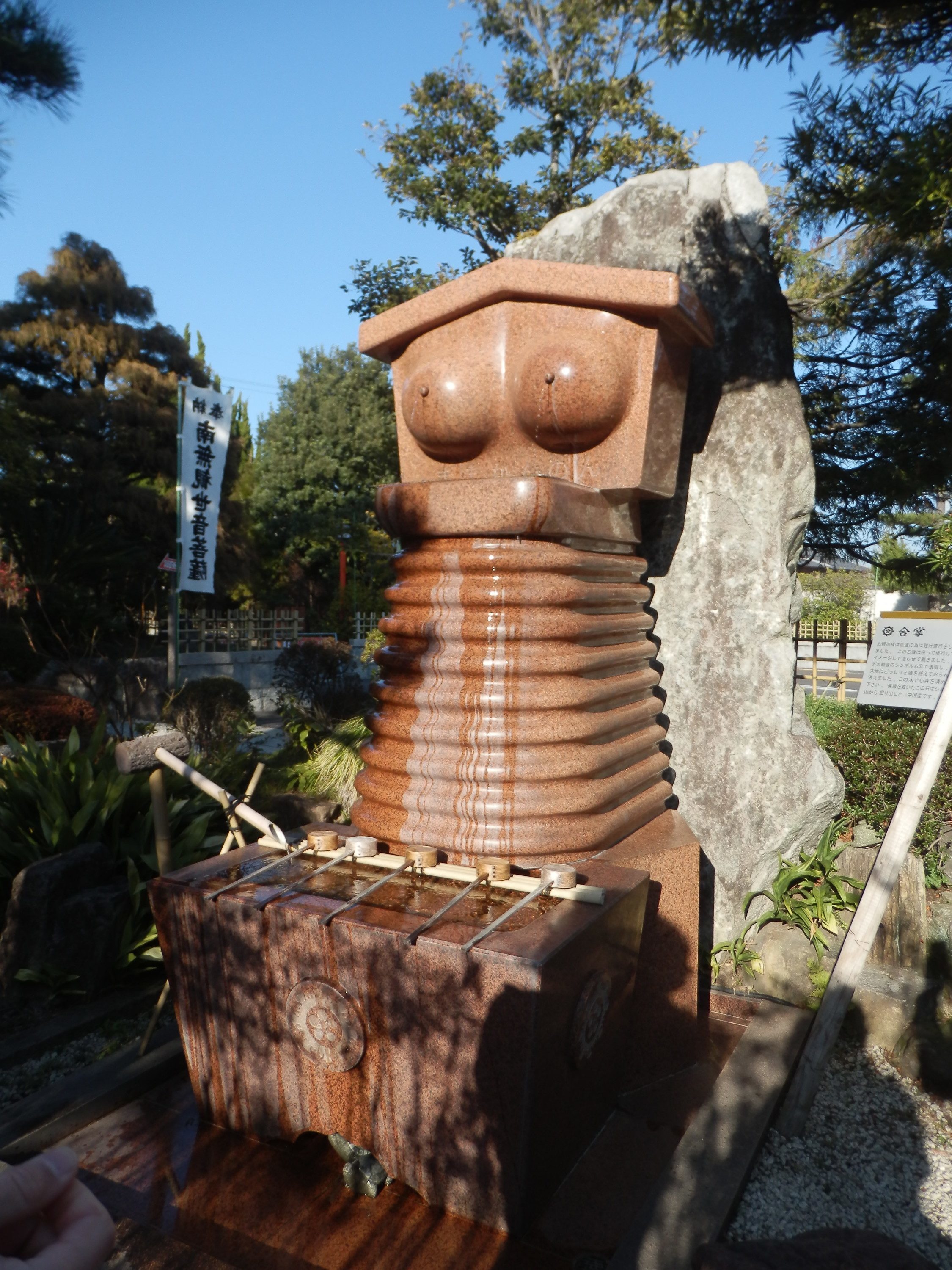 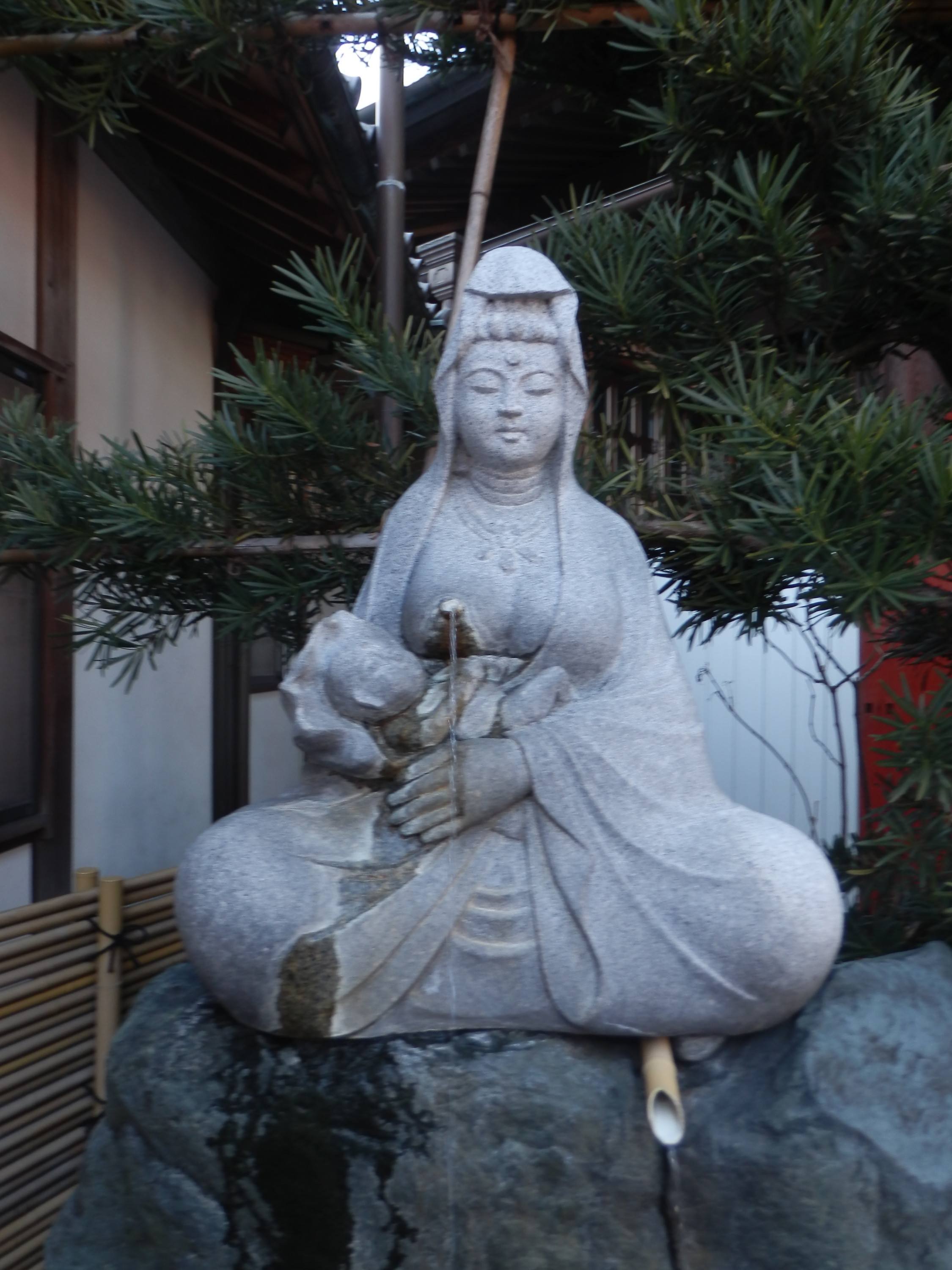 After passing these delightful lactating ladies, the rest was basically standard temple fare – but boob-themed. The way to worship here seemed to be to kneel down in front of a pair of granite boobies, massage them with a sort of brush-like object and then touch it on your own head. People seemed to be taking it very seriously, anyway.

Mamma Kannon’s “Ema” were, of course, breast- and fertility-themed too. Some were hoping for a healthy baby or for a relative’s safe recovery from breast cancer, but most of them just seemed to be requests to the boob-gods for more covetable chesticles.

And at last, as we were leaving, we came upon this – where you can have your photo taken as a baby groping your mother’s breast. Why not? 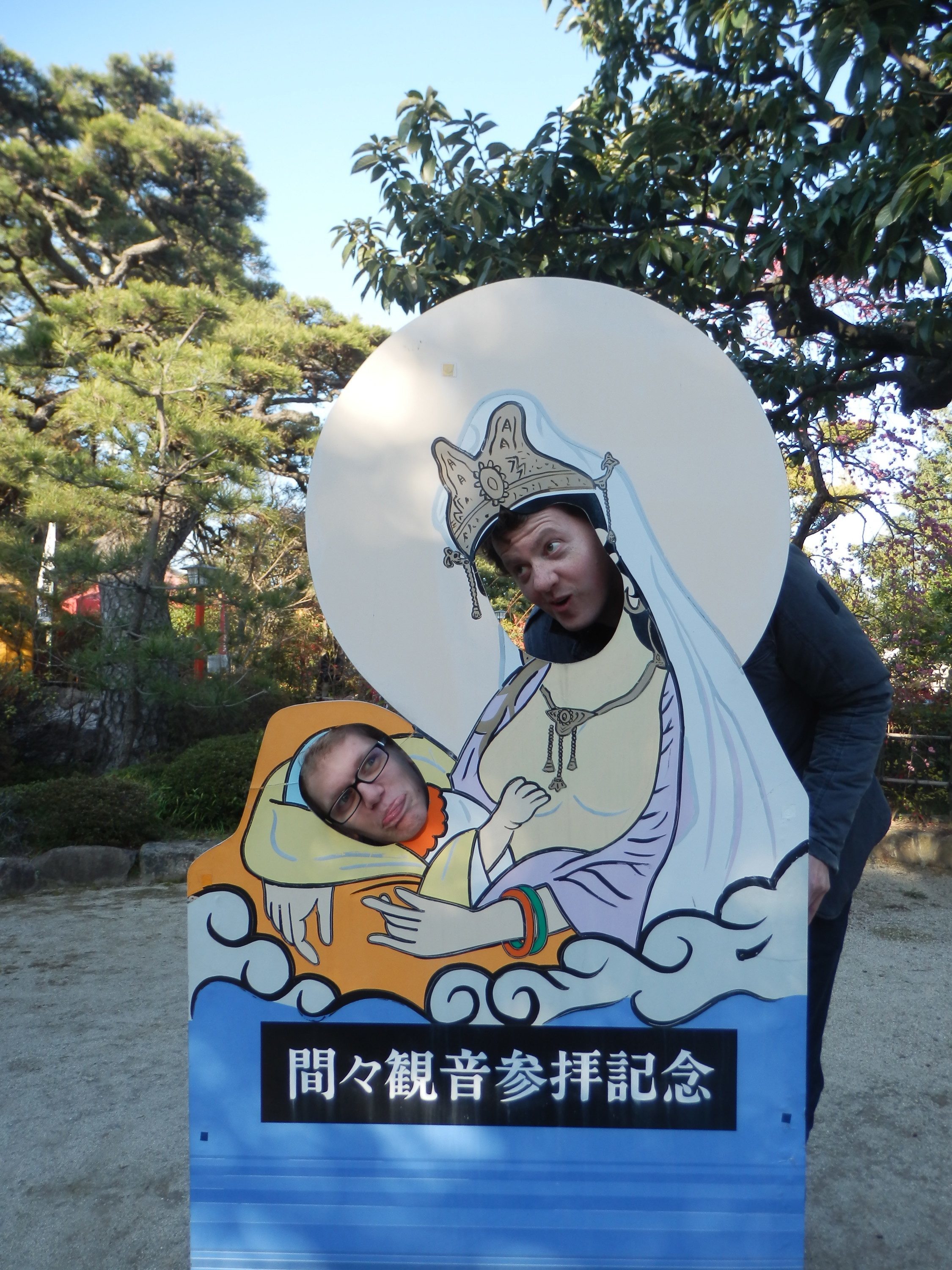 And that is that for my fun-filled Saturday in Komaki! I hope you enjoyed it. 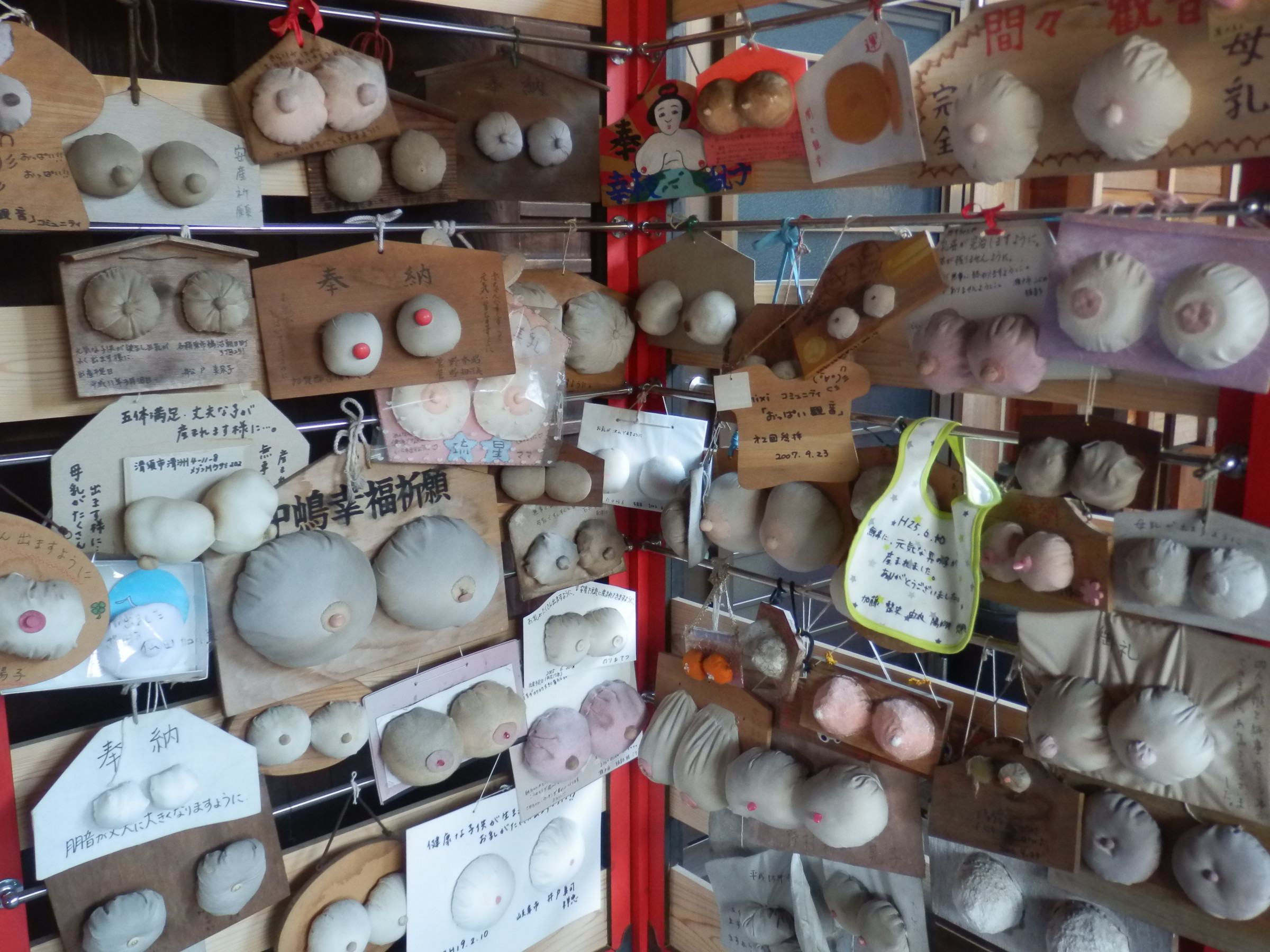 There are many interesting aspects to Japanese culture. We can help you discover it.